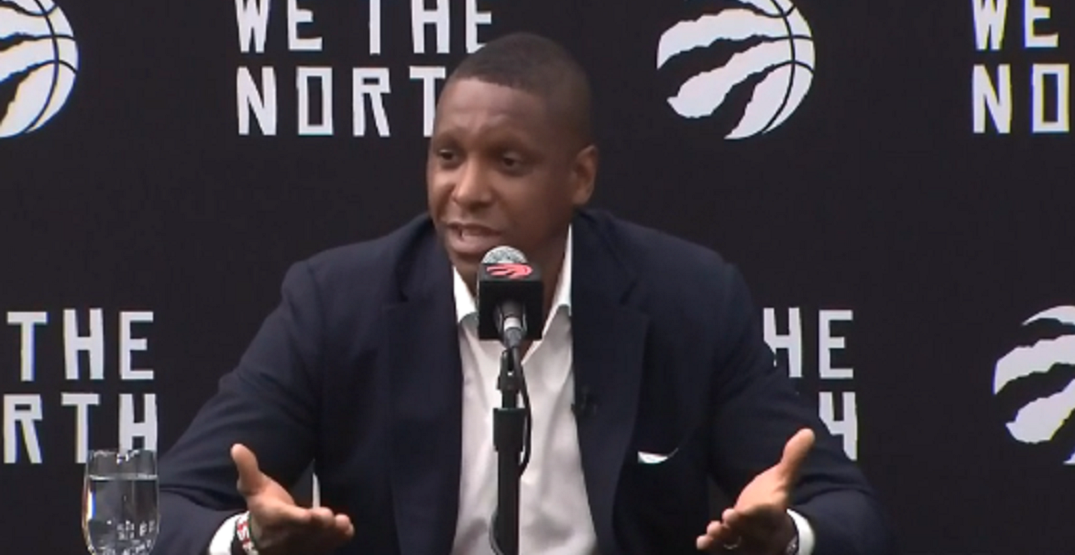 Raptors executive Masai Ujiri gave his first press conference to the media in Toronto on Wednesday since officially re-signing on a multi-year deal last week. It was also the first time he faced the media in person since the start of the pandemic.

Ujiri carries a new title as vice-chairman in addition to his duties as team president, though he wouldn’t really get into the details of if there’s any difference in his role.

“Vice-chairman is just sexy,” Ujiri told reporters with a laugh.

He also joked about the length of his contract, which was not disclosed publicly, saying that he’d be in Toronto “forever.”

Much of Ujiri’s conference focused on the makeup of the Raptors’ roster for next season, which most notably saw Kyle Lowry depart to the Miami Heat as part of a sign-and-trade deal.

“We’re going to develop these players and we’re going to find a way to win [another] championship here,” Ujiri said. “We’re not going to sit here and cry that players don’t want to come here.”

Ujiri opened his media availability with an open thank you to Lowry, saying that he was both the greatest Raptor to ever wear the uniform and confirmed that he’d eventually have his jersey number hanging from the rafters of Scotiabank Arena.

“We wish him all the best where he is,” Ujiri said. “We just hope we beat [Miami] four times a year.”

One of the pieces returning in the Lowry deal was 21-year-old forward Precious Achiuwa, who attended one of the ‘Giants of Africa’ youth programs that Ujiri is a co-founder of.

“His first word was ‘finally,’” Ujiri said of his first conversation with Achiuwa following the trade to Toronto. “My first word was, ‘you are mine now.’”

Ujiri also showed some praise to Pascal Siakam, who has had an inconsistent stretch of play since being named to his first All-Star team in 2020. Ujiri referenced challenges that Siakam has faced off the court, including a bout with COVID-19 and visa issues prior to the the 2020 NBA bubble.

“I know the fanbase has been hard on him,” Ujiri said. “But trust me, Pascal is a prideful man, Pascal is an unbelievable basketball player.”

In 56 games last season, Siakam led the team with 21.4 points per game, while also averaging 7.2 rebounds and 4.5 assists.

“Pascal is here, he’s a Raptor, and he’s going to play with us,” Ujiri added.

Ujiri didn’t quite confirm that the Raptors would be playing at home, but said the schedule set to be released will have “Toronto” as the team’s home after playing a season in Tampa Bay.

“We have not looked elsewhere. We are not going to look elsewhere. Our goal is to play at home,” Ujiri said. “Playing another year away will set us back five years. We’re not trying to do that.”

Ujiri also discussed the MLSE COVID-19 policy, which requires either a double vaccination or negative test for fans, staff, and team employees at upcoming games, calling the policy “fair” and “hugely important.”

It’s clear that Ujiri feels there’s some unfinished business with the Raptors organization. He also seemed to reference the incident following the Raptors’ 2019 championship where video evidence showed Ujiri was shoved by an Alameda County sheriff’s deputy.