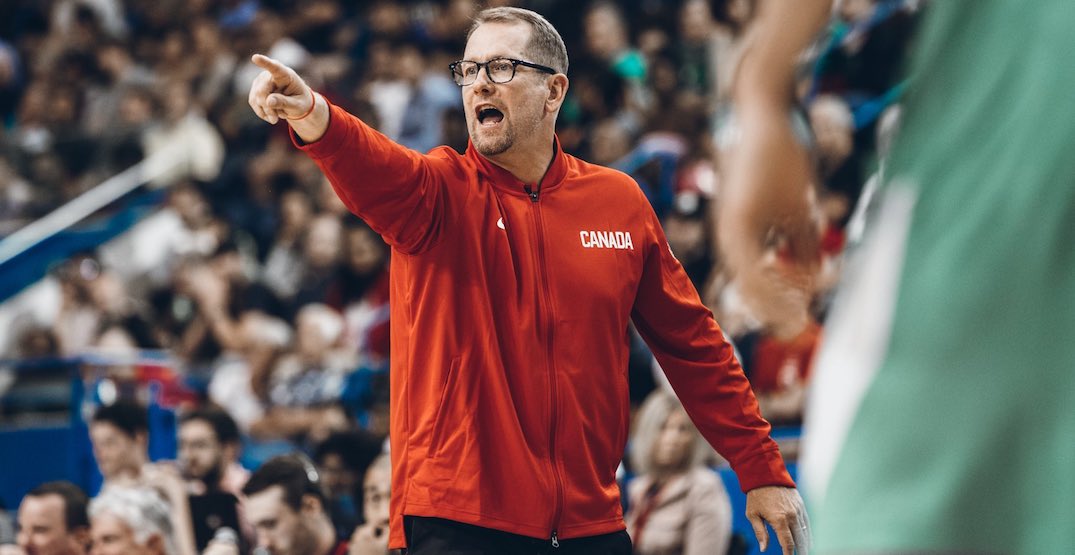 Nick Nurse was born in Iowa, but Canada is home now.

The Toronto Raptors head coach proved that by signing a multi-year contract extension with Canada Basketball, which was announced today. The new deal will keep Nurse as the head coach of the national team through the Paris 2024 Olympics.

Named the senior men’s national team head coach in June 2019, Nurse was undeterred by disappointing commitment from players for the 2019 FIBA Basketball World Cup and a crushing loss during Olympic Qualifying in Victoria last month.

An NBA champion with the Raptors in 2019, Nurse doesn’t have anything to prove. He’s already been to the Olympics too, as an assistant coach with Great Britain in 2012.

So why give up his summers to coach for Canada, his adopted country? Nurse explained why in an open letter to Canadian basketball fans.

“[If] you’re wondering why me, a guy from Carroll, Iowa, cares so much about the fate of basketball in Canada, well I need you to know this,” Nurse said.

“I’ve had a few stops between Iowa and Toronto, where I first joined the Raptors organization as an assistant nine years ago… I’ve done the global basketball grind.

“So it feels GOOD to have a place you can call home and that’s what Toronto — and by extension, Canada — has become for me and my family. I absolutely love this city. The fans of the national team and the Raptors have been incredible to me. One of the things I talk to the national team players about a lot is that my two youngest sons were born in Toronto. After the coaching journey I’ve been on, getting to stay in one place long enough to call it home is special. Getting to be part of growing something bigger than yourself there is even cooler.

“I think anybody that gets to do what they love for a living has an obligation to give it everything they’ve got. To have two of the best jobs in the world at the same time? It’s humbling. I am both very honoured and humbled by it. While I have this opportunity, I want to give it my best shot.”

Canada has not qualified for the Olympics in men’s basketball since the Steve Nash-led group that played at Sydney 2000.

NBA talent has never been greater in Canada, yet the national team has struggled to get many of them to commit to playing internationally. Just two Canadian NBA players — Cory Joseph and Khem Birch — went to China for the 2019 FIBA Basketball World Cup, and the team finished 21st out of 32 teams.

That was supposed to change for Olympic qualifying, and the assembled team was the most talented team on paper competing in Victoria. Ultimately, they lost, which shows the importance of developing a team, not just a collection of talent.

“My staff and I, with the support of the incredible staff here at Canada Basketball, are working to assemble a team that can take us to the podium,” Nurse added.

“One of the biggest lessons that came out of the FIBA Olympic Qualifying Tournament in Victoria this past June is just how important the process of selecting the group of 12 committed players is.”

The challenge that lies ahead is getting commitment from enough top players — notably Jamal Murray, Andrew Wiggins, R.J. Barrett, and Shai Gilgeous-Alexander. Nurse isn’t just looking for a short-term commitment either, saying he wants a three-year commitment from players.

“We believe that to get where we are going we need to lay out a three-year commitment — from today to Paris 2024 — and players need to decide that yes, they are in. We need to lay out what’s waiting on the other side, and how we’ll invest in their journey. This is what we’re truly after here, because this is one of the lessons we’ve learned time and again. I think everyone sees it clearly, including those of you reading these words now.”

Canada’s Tokyo Olympic dreams were crushed last month by the Czech Republic, a team with inferior talent that proved to be a more cohesive group by virtue of playing together for a longer period of time.

“Another lesson learned is that chemistry, camaraderie and continuity can — and often will — trump talent. Keeping a core group of players together is crucial. Accomplishing this is the key to getting where we want this program to be and to me, it is also a sign of immense respect for all of those countries and players that do it year after year. This is why we’re doing it.”

The next step for Canada is to qualify for the 2023 FIBA Basketball World Cup, with qualifiers beginning in late November.

“As the head coach of the Senior Men’s National Team, our goal is to get this team on the podium, by leveraging this golden era of ball in Canada. That’s what they hired me to do. That’s what this three-year plan is about.

“That’s what I’m focused on with this program and it’s what I want you to know as you heard the news about my contract extension today. Basketball is on the rise in Canada, yes, but the most exciting part is that where we are today is really only the beginning.

“This is where I thank you for your time reading and sign off so that I can get back to working on building a team you’ll be proud to support.

“Canada, thank you for continuing to support us.”