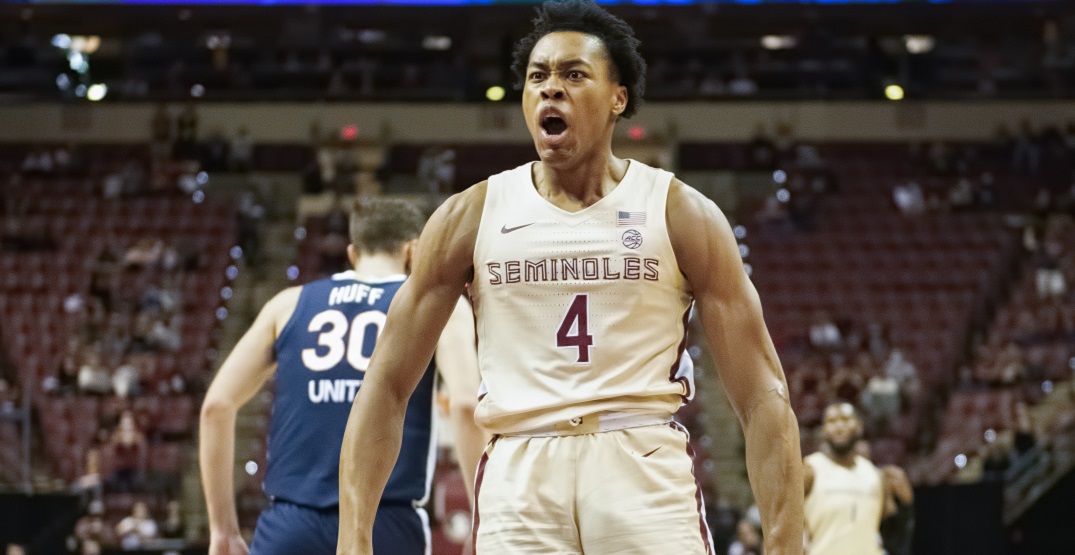 The moment that Toronto Raptors first-round pick Scottie Barnes announced himself to the college basketball world came on December 9, 2020.

Just a week removed from his debut for Florida State against cross-state North Florida, Barnes got the ball in the back court with 8.7 seconds on the clock in 67-67 game in double overtime against Indiana.

“He’s supposed to be as nervous as a little kid at church right now,” Florida State assistant coach Charlton “C.Y.” Young said in an interview with Daily Hive. “He’s starting at the point in a big ACC game… he’s straight from the prom. It wasn’t like that was 25 games in… it was his second game.”

Barnes carried the ball up the court, looking for options. But it seemed like his ultimate plan to drive to the basket was set in stone in advance.

“He shoots it off the top of the backboard, a running Euro-step with his left hand to win the game,” Young said. “And I’m sitting there thinking… this fuckin’ kid is unbelievable.”

Barnes came to Toronto via the fourth overall pick in this year’s draft, in a move that largely shocked the Raptors fanbase and the basketball world as a whole.

Gonzaga guard Jalen Suggs seemed to be the consensus move for the Raptors, particularly with the eventual departure of Kyle Lowry on the horizon.

“Obviously, [Barnes] wanted to go as high as he could possibly go,” Young said, “He’s a competitor. And he, he definitely believes in himself… he believes he was one of the top players in the draft.”

“Toronto did the right thing taking him at four,” he added. “Three, four years from now, everybody will be like, ‘we stole one’. He’s going to impact winning in that way.”

In Barnes’ Summer League debut this weekend in an 89-79 win against the New York Knicks, he put up 18 points, 10 rebounds, and five assists.

“I watched every play… I was screaming and hollering,” Young said.

The biggest knock on Barnes is his jump shot, a trait that Young said he thinks Barnes will continue to develop during his time with the Raptors.

“His jump shot made a huge jump with us here at Florida State,” Young said. “But we only had him for 180 days. People talk about one-and-done, but it was really six months and then he’s headed to the NBA.”

Barnes shot 7-18 from the field against New York on Sunday.

“He went one-for-four from three [against the Knicks]. I was praying for two-for-four just to shut everybody up,” Young added. “But I knew he’d do everything else. I knew he’d defend, I knew he’d be disruptive, and steal, defend, and get offensive rebounds. Scottie Barnes never quits on a play.”

As for a player comparable, Young pulled out one of the biggest stars of the 1990s for who Barnes’ game reminds him of.

“I always get kind of confused when people are saying, [Barnes plays basketball like Warriors forward] Draymond Green,” Young said. “I think of Scottie Pippen.”

Barnes’ role on the Raptors isn’t quite clear yet. In his freshman year at Florida State, he was used throughout the lineup in 24 games, while averaging 10.3 points, 4.1 assists, four rebounds and 1.5 steals per game.

At six foot nine inches and 225 pounds, Barnes has the ability to play just about anywhere in either the backcourt or frontcourt outside of the centre position.

“[Pippen] was probably one of the most underrated player in the history of the league,” Young said. “[Barnes] is the same guy… he’s got a chance to have a Hall of Fame-type career when it’s over. He’s unselfish, selfless. He truly plays position-less basketball.”

Young himself played college basketball at Georgia Southern as well as a year professionally in France before embarking on a coaching career that will hit its 25th anniversary this fall.

Though he retired officially from playing while in his 20s, Young has continued to play recreationally simply because he loves the game.

Young sees a bit of his own approach to basketball in Barnes, who he called a ‘high-character gym rat.’

“Scottie Barnes, he loves to hoop,” Young said. “When he’s 50, he’ll be playing in the church league. People will be asking him, why are you still playing basketball?”

Barnes’ love for the game is clear, as is his infectious, youthful personality. Some could say he’s been working hard his whole life for a shot at the NBA.

But Young thinks there was a bit of destiny involved as well.