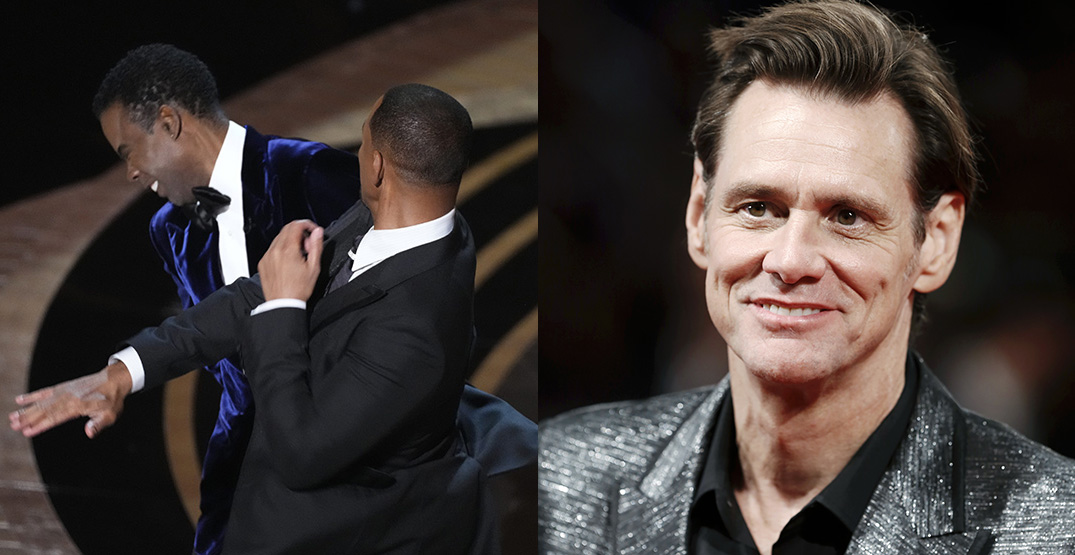 Jim Carrey has decided to weigh in on the infamous Will Smith Oscars slap.

In an interview with CBS Morning‘s Gayle King, the Canadian actor slammed Hollywood for cheering for Smith after he won the Academy Award for best actor shortly after the slap occurred.

“I was sickened,” Carrey told King on Tuesday. “I was sickened by the standing ovation. Hollywood is just spineless en masse, and it really felt like this is a really clear indication that we aren’t the cool club anymore.”

The Sunday night slap occurred after comedian Chris Rock made a joke about Jada Pinkett Smith’s shaved head, something she had to do in light of her alopecia, an issue she’s talked openly about on social media.

According to Variety, the Los Angeles Police Department confirmed on Monday that Rock “declined to file a police report” following the incident.

Carrey said that if it had happened to him, he would’ve sued Smith for $200 million.

“That video is going to be there forever…that insult is going to last a very long time,” he said. “You do not have the right to walk up on stage and smack somebody in the face because they said words.”

For context, Rock has been criticized for his degrading takes on Black women before. And this isn’t his first time picking on Pinkett Smith. At the 2016 Oscars, during the #oscarssowhite controversy, Pinkett Smith decided to sit out in protest. Rock joked that she was only boycotting because she wasn’t invited.

The incident has brought about discussions surrounding the protection of Black women, toxic masculinity, and the Oscars’ far uglier past. In fact, celebrities and fans have dropped many hot takes, some in favour of Smith’s actions and others agreeing with Carrey.

“It was just a selfish moment that cast a pall over the [Oscars],” said the actor.

The slap flooded news feeds on Monday, upstaging historic wins from the night, including the first Deaf male actor to win an Academy Award.

Carrey added that he thinks Smith might have personal frustrations he’s dealing with and that he wishes him the best.

Smith apologized to Rock in a statement on Instagram Monday night.