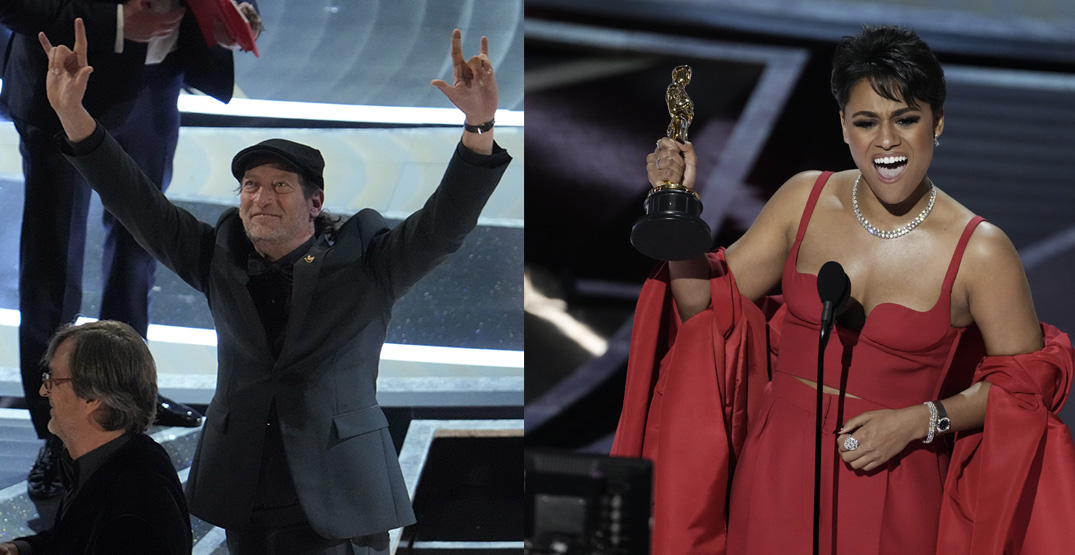 Whether you were tuning in or getting a recap via your endless Twitter feed, this year’s Oscars definitely made history — in more ways than one.

Yes, we all know about the slap of the century and the subsequent hot takes that have come out of it.

While the incident has brought about important discussions surrounding the protection of Black women, toxic masculinity and the Oscars’ far uglier past, it also, unfortunately, upstaged some very important wins for representation in the entertainment industry.

From the first openly queer, Afro-Latina actress to the first Deaf male actor to win Academy Awards, this year’s Oscars is certainly one for the history books.

Afro-Latina actress Ariana DeBose won her very first Oscar for playing Anita in Steven Spielberg’s remake of West Side Story. She took home the award for best supporting actress, the same role that won Rita Moreno the same Oscar in 1962.

For the first time in Academy Award history two actors win the Oscar for playing the same character.

DeBose made history as the first openly queer woman of colour to win an acting Oscar.

“To anybody who has ever questioned your identity, ever, ever, ever — or you find yourself living in the gray spaces — I promise you this: There is indeed a place for us,” she said in her acceptance speech.

“To anybody who has ever questioned your identity … or finds yourself living in the gray spaces … I promise you this, there is indeed a place for us.”

Troy Kotsur made history as the first male actor to win best supporting actor for a performance in American Sign Language. He took home the award for his role as Frank Rossi in CODA. His co-star Marlee Matlin had been the only deaf person to receive an Academy Award for over three decades until Sunday night.

In a sweet moment caught on camera, the audience applauded in ASL as Kotsur made his way up to the stage.

THIS MOMENT. Everyone applauding in ASL 🥺❤️ Congratulations to @TroyKotsur for taking home the #Oscar award for Best Actor In A Supporting Role for #CODA! pic.twitter.com/52rcJpiQTa

He accepted the award with a speech in ASL, which was translated by an interpreter.

“This our moment!” he signed to the Deaf community.

While his slap may have upstaged his actual win, Will Smith won his first Oscar on Sunday. He took home the award for best actor for playing Serena and Venus Williams’ father, Richard Williams, in the film King Richard.

This was a personal best for him, but also an important win for Black representation in Hollywood, as he’s only the fifth Black actor to win the award.

He apologized to the Academy for his actions in his teary-eyed acceptance speech saying, but made sure to first recognize Richard Williams off the top.

“Richard Williams was a fierce defender of his family. In this time in my life, in this moment, I am overwhelmed by what God is calling me to do and be in this world,” said Smith.

Will Smith’s acceptance speech as he wins his first ever #Oscar pic.twitter.com/qKVTOb7V6Q

CODA made history multiple times over the course of Sunday night. It was the first film distributed by a streaming service to win best picture — Apple TV+ can now boast an Academy Award-winning film on their lineup.

It was also the first time that the Academy Award for best picture went to films directed by women in back-to-back years. Sian Heder directed the humorous and heartfelt family drama about Children of Deaf Adults, or CODA. Her win follows Chloé Zhao’s Nomadland win last year.

Best director goes to a woman two years in a row

It feels crazy to say this in 2022, but Jane Campion made Oscars history for being the second woman in a row to win an Oscar for best director.

She won for her film Power of the Dog, a Western drama starring Benedict Cumberbatch. She follows Chloé Zhao’s history-making win last year for directing Nomadland.