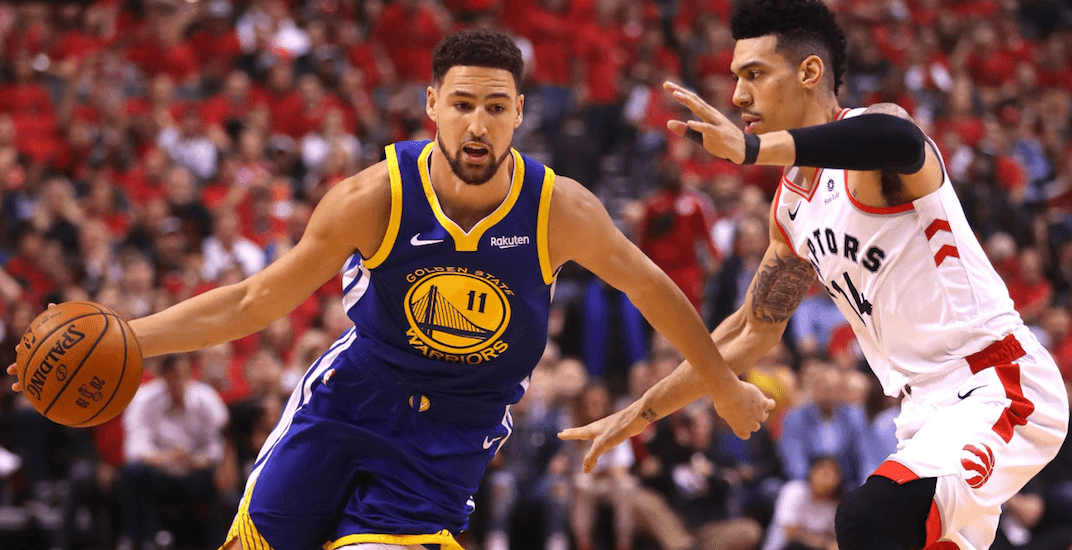 The Golden State Warriors will limp into Game 3 of the NBA Finals.

There was reportedly “some optimism” within the Warriors that Kevin Durant could return for Game 3 on Wednesday, but head coach Steve Kerr quashed that theory on Tuesday.

Durant hasn’t played since leaving Game 5 of the second round against the Houston Rockets with a right calf strain. Golden State obviously hopes he can return for Game 4 on Friday.

The Warriors could be without another one of their star players, as Klay Thompson is “day-to-day,” says Kerr. He’s listed as questionable to play on Wednesday.

Thompson left Sunday’s game with a hamstring strain and did not return.

“It’ll be a game time decision, but for me personally, it’d be hard to see me not playing,” Thompson told reporters on Tuesday. “So hopefully I’ll feel much better tomorrow and be a go for tip-off.”

The news is worse for Warriors big man Kevon Looney, who will miss the remainder of the series after suffering a non-displaced cartilage fracture on the right side of his rib cage. Averaging 20.3 minutes per game, Looney was Golden State’s most used player off the bench this postseason.

If Thompson can’t play, the pressure will be ramped up on Steph Curry to carry his team as the series shifts to Oakland. DeMarcus Cousins, who played 28 minutes in a starting role on Sunday in just his second game back from injury, will also need to step up.

As far as the Raptors are concerned, Kawhi Leonard has been playing at less than 100% health for a while now. He’s been seen limping on a number of occasions, but so far it hasn’t stopped him from dominating. Leonard scored 23 points in Thursday’s series-opening win, and had 34 points in a losing cause in Game 2.

OG Anunoby dressed, but did not play in Game 2 for the Raptors. The second-year forward hasn’t played since April 9. He’s likely to be rusty upon return, but he can play key minutes off the bench when healthy.

After losing Game 2 on home court, the Raptors are now faced with the prospect of having to win at least one game at Oracle Arena in Oakland. Given how banged up the Warriors are, their best chance at doing that will be Game 3.