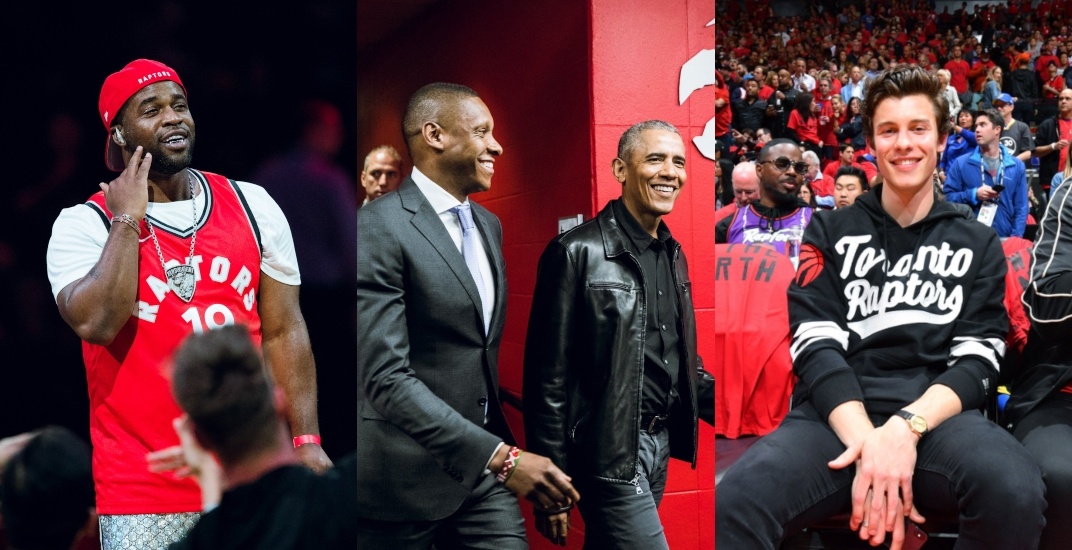 With apologies to the MMVAs, the 2019 NBA Finals is perhaps the biggest star-studded event to ever come to the City of Toronto.

Kawhi Leonard, Pascal Siakam, and Kyle Lowry headlined stars on the court for the Raptors through the first two games at Scotiabank Arena, with Steph Curry and Klay Thompson opposing them for the Warriors – with the injured Kevin Durant sitting on the bench.

But the star power on the floor was outshined by the celebrities in the crowd.

There was no bigger name in attendance than former President of the United States Barack Obama, who watched Game 2 beside NBA commissioner Adam Silver. Obama received a warm welcome from the fans in Toronto, who even serenaded him with an “MVP” chant.

Great to be in Toronto for Game 1 of the #NBAFinals! Who better to cheer with than @superfan_nav, go @Raptors! #WeTheNorth pic.twitter.com/NbmMiPwHdz

Drake wasn’t the only star from the world of music on hand at the NBA Finals.

Canadian recording artist Alessia Cara sang O Canada, pausing on more than one occasion to let fans singing along become the stars of the show.

Other big names reportedly in attendance for Game 2 included Shawn Mendes, The Weeknd, J. Cole, Dallas Green, Steve Aoki, as well as Max and Mike from the Arkells.

Didn’t win last night but did manage to steal this guy for a minute 🌹 pic.twitter.com/2tWQRtgvP1

Ride with the mob. #WeTheNorth pic.twitter.com/7iSfcdiXUL

It's a love / hate thing pic.twitter.com/Klj1pWGJGH

"If the Raptors win we need to have a free concert with Me, Drake, Tory Lanez, Weeknd, Nav, Bieber, Daniel Caeser…everyone needs to come and do a free concert in Toronto if we win the 'ship" – Kardinal Offishall, who was fired up last night. pic.twitter.com/RkFhST9Gof

There was no shortage of pro athletes in attendance, including golfers Rory McIlroy and Sergio Garcia for Game 2, while Bubba Watson was spotted in Game 1.

Rory McIlroy was just shown on @TSN_Sports sitting court side with his wife at the Raptors game in Toronto. Welcome to the 6ix @McIlroyRory 🇨🇦🙌 #WeTheNorth #raptors pic.twitter.com/tAYDJJlO6G

Robbie Alomar loves the Raptors we the North pic.twitter.com/PyIfsWpdoQ

A number of Toronto Maple Leafs players and management were on hand, including Mitch Marner, Travis Dermott, Nazem Kadri, John Tavares, and Zach Hyman pictured below.

And of course, there was a plethora of big names from the world of basketball, as the Raptors honoured players from the past during a quick Game 1 ceremony. The list of players on hand included Chris Bosh, Tracy McGrady, Damon Stoudamire, Dell Curry, Charles Oakley, Muggsy Bogues, Jerome ‘Junkyard Dog’ Williams, Morris Peterson, as well as former general manager Isiah Thomas.