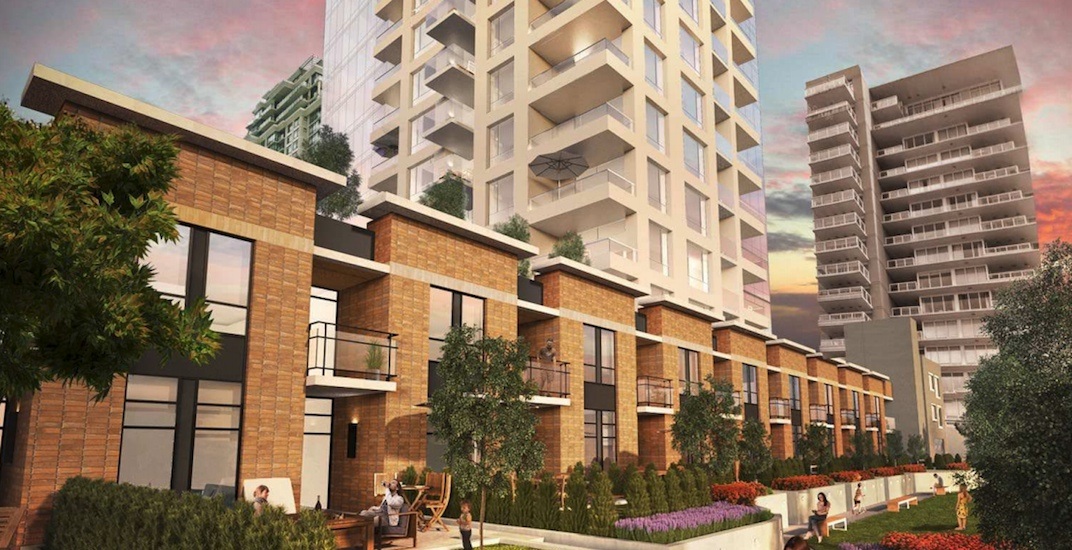 Artistic rendering of 618 Carnarvon Street, New Westminster. These townhouses above Clarkson Street are built on a new platform over the SkyTrain guideway. (GBL Architects)

A new unique redevelopment in New Westminster will integrate with SkyTrain by building over a portion of the elevated guideway.

Earlier this year, New Westminster City Council approved an application by City Point Real Estate Development Inc., in partnership with Brook Pooni Associates, to redevelop a site at 618 Carnarvon Street – the southwest corner of the intersection of Carnarvon Street and Sixth Street – into a mixed-use redevelopment.

The site is currently occupied by a vacant parking lot and retail buildings up to three storeys high.

The design by GBL Architects includes a 33-storey, 350-ft-tall residential tower, townhouses facing Carnarvon Street and an internal courtyard, and townhouses above Clarkson Street on a concrete deck over the Expo Line’s exposed tunnel portal. 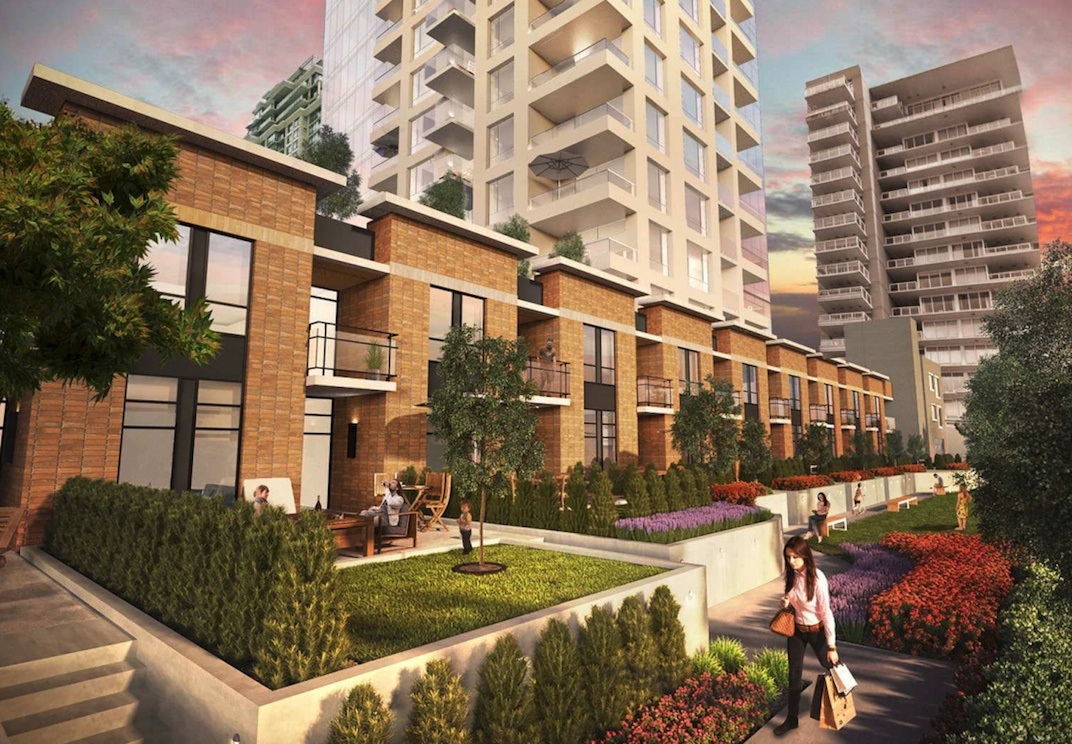 Artistic rendering of 618 Carnarvon Street, New Westminster. These townhouses above Clarkson Street are built on a new platform over the SkyTrain guideway. (GBL Architects) 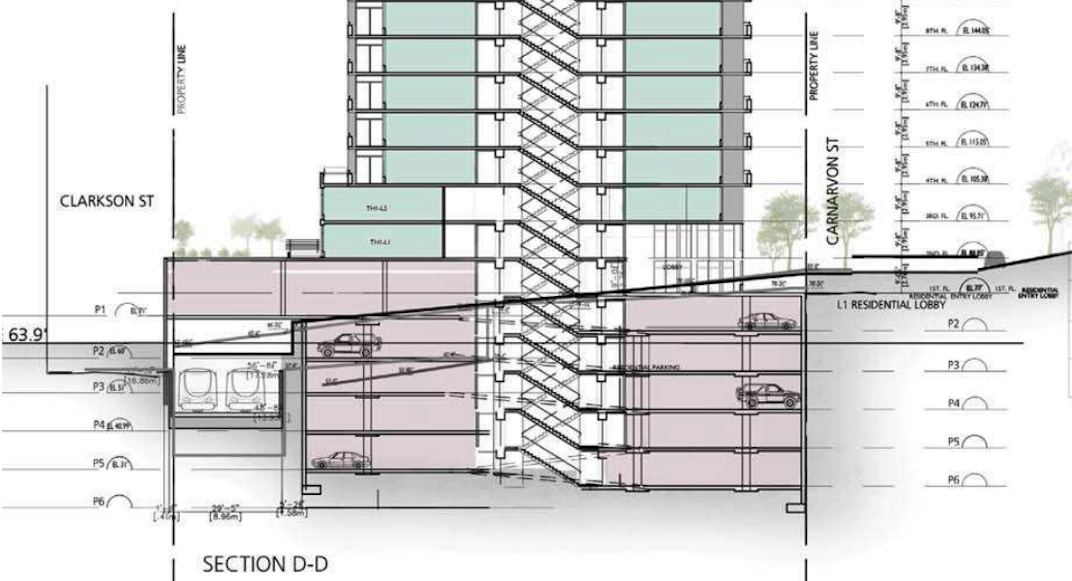 There will be a level of parking between the SkyTrain guideway and the 10 townhouse units through the so-called “encapsulation” design, which has acoustic benefits for not only the residents of the new building but also the wider neighbourhood. 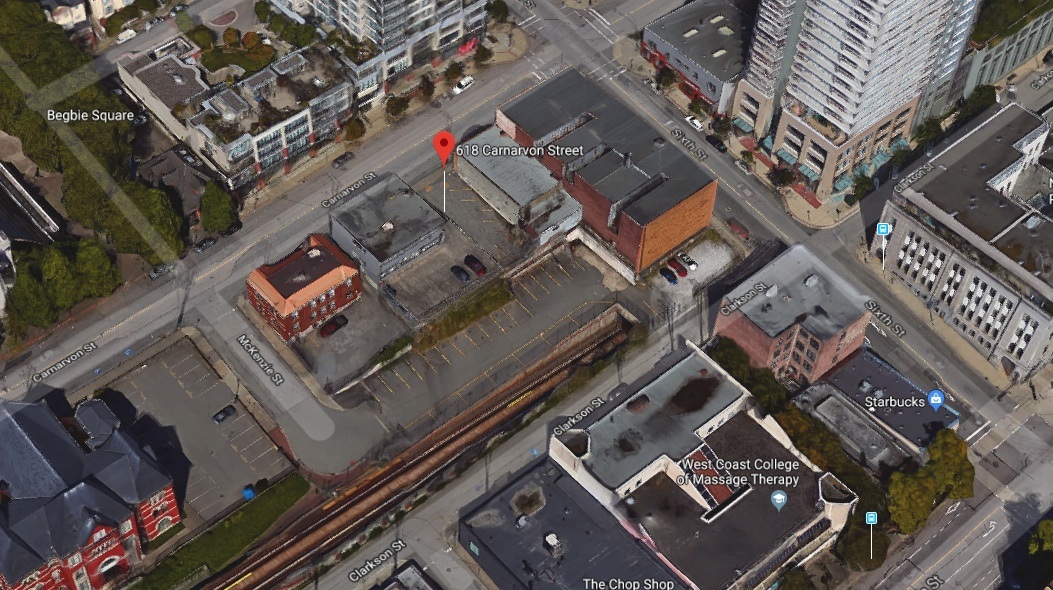 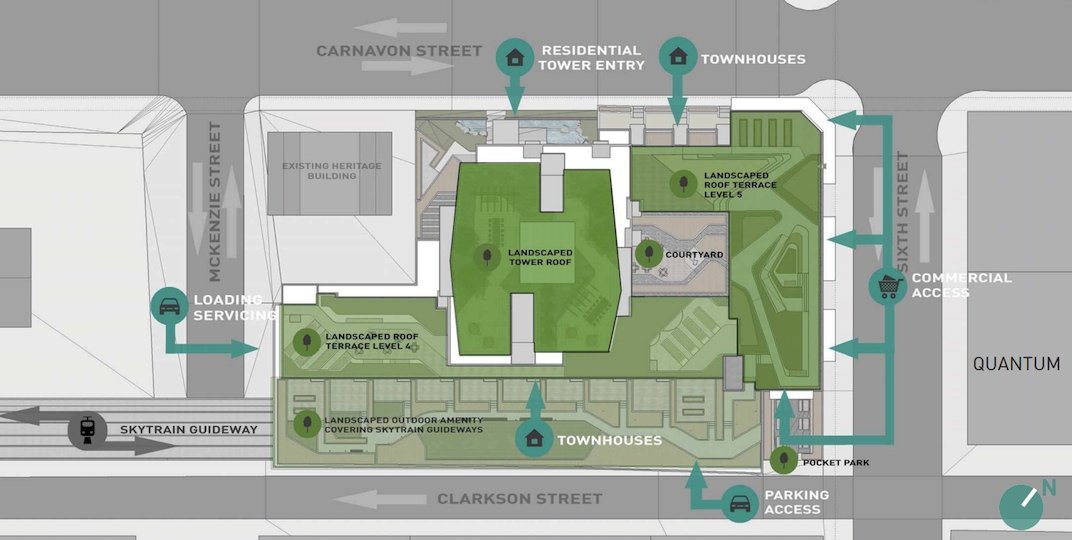 A small portion of Clarkson Street will be closed for its integration into the development, as the road is rarely used by vehicles and the space is needed for columns that will support the proposed structure that seals off the guideway. About 800 sq. ft. of City-owned public space will be purchased by the developer at “fair market value.”

The elevated guideway and tunnel portal on the southern edge of the site along Clarkson Street. (Google Maps Streetview)

Artistic rendering of 618 Carnarvon Street, New Westminster. This rendering shows the proposed structure on Clarkson Street for the encapsulation of the SkyTrain guideway and the mural. (GBL Architects)

Prior to City Council’s decision to allow the project to proceed, the developer received TransLink’s preliminary approval for the encapsulation, although final approval over the technicalities is still required in order for a development permit to be issued. 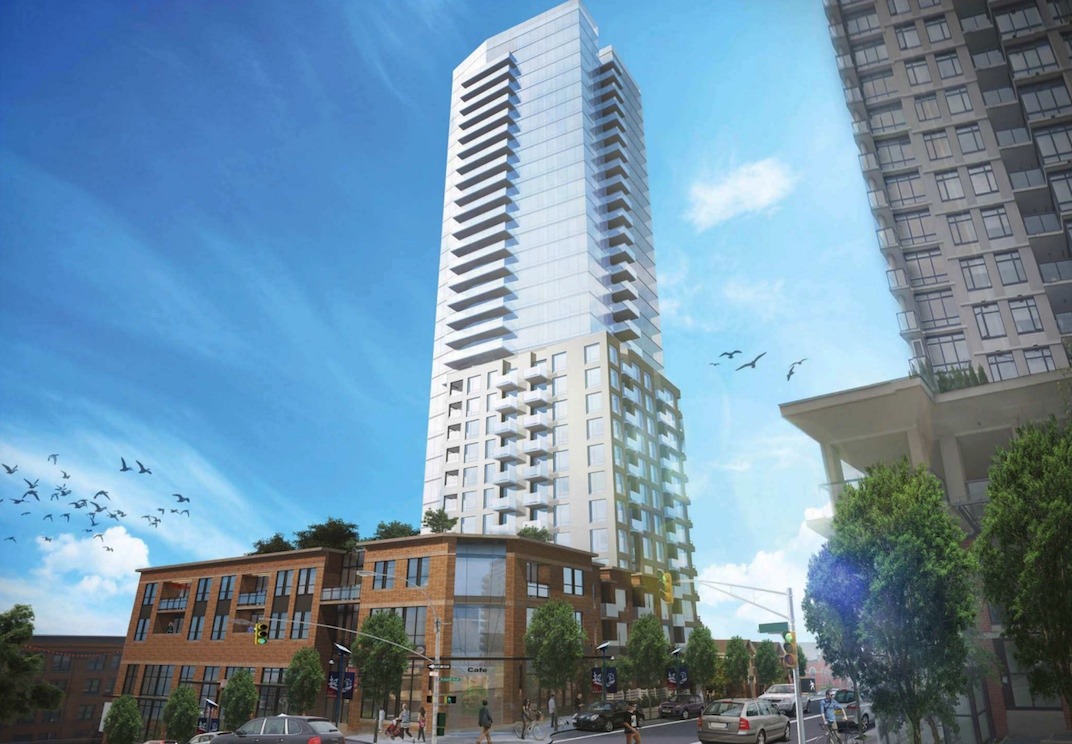 The SkyTrain tunnel portal on the southern edge of the site. (Google Maps Streetview)

Residents will have access to three separate indoor amenity spaces totalling about 2,600 sq. ft., plus outdoor amenity space in the internal courtyard and next to the townhouses on top of SkyTrain.

The project also includes about 5,700 sq. ft. of ground-level commercial space, 325 parking stalls, and a small 938 sq. ft. pocket park on the southeast corner of the site.

Throughout the marathon public consultation process, the project attracted opposition from neighbouring residents over the proposed density and the resulting loss of views from their buildings, but the developer addressed some of these issues by acquiring an adjacent site to preserve the views for the residents.

On top of all of this, a cash contribution of $2.9 million will be made towards the City for public serving amenities.