Artistic rendering of the Bombardier Innovia Metro Mark III train now in use on SkyTrain's Expo and Millennium lines. (TransLink)

The municipality on the easternmost terminus of the Fraser Highway Corridor rail rapid transit project has formally revealed for the first time that it wants SkyTrain technology, not street-level light rail transit.

In a meeting this evening, Langley City Council is expected to approve a resolution that states its clear preference for a seamless extension of SkyTrain’s Expo Line from King George Station in Surrey to Langley Centre.

Today’s proposed resolution states that the City of Langley will continue to lobby the federal government, provincial government, and TransLink to secure additional funding for SkyTrain technology.

This funding pursuit is based on Langley City Council’s conclusion on its preferences for SkyTrain technology in a previous resolution that was approved in a closed meeting in December 2017.

“Langley City Council concludes that the SkyTrain technology for Stage 2 – Fraser Highway Corridor between King George Station and Langley is superior to Light Rapid Transit (LRT) based on the perspective of safety, travel time, reliability and potential for future extensions,” reads the December 2017 resolution, which was released publicly for the first time this week.

The SkyTrain and LRT options for the 16-km-long Fraser Highway route have a similar number of stations, although station platform lengths for SkyTrain will be 82.5 metres – more than double LRT.

But there are significant travel time savings with SkyTrain, with a travel time of 22 minutes and no required transfer from the existing Expo Line. In contrast, LRT running mainly at street level will take up to 35 minutes.

This, of course, goes against the City of Surrey’s very well known preference for LRT for both the Surrey Newton-Guildford and Fraser Highway projects, and this is now the approach adopted by TransLink as well.

Map of the new station locations for the SkyTrain Expo Line extension along the Fraser Highway from King George Station to Langley Centre. (TransLink) 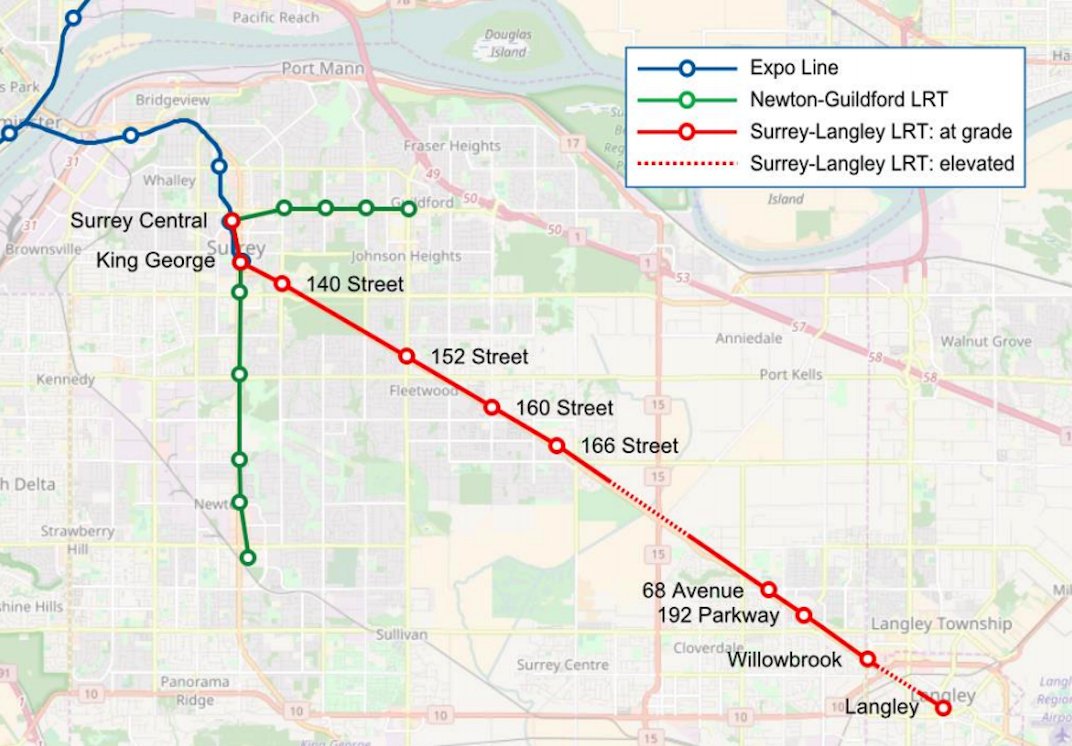 At the same time, Langley City Council does not want to delay the project given the $965 million cost difference between SkyTrain and LRT. Last week, TransLink released a report that found that SkyTrain on this route will cost $2.91 billion while LRT will cost $1.95 billion based on 2022 dollars and with the inclusion of a high 25% contingency fund for any unexpected cost.

In its passed resolution last year, the municipal government only supported LRT over its concerns that additional funding for the more ambitious, long-term option of SkyTrain may not materialize, and that this would delay the funding approval of the overall 10-year Phase Two Investment Plan, which was achieved in late-June 2018.

Langley City Council’s “acceptance” of LRT technology is linked with a number of stipulations on the design, including a sufficient road width on Fraser Highway for future bike lanes, adequate pedestrian connectivity and interface infrastructure between the terminus station and the proposed bus depot north of Fraser Highway and east of 203rd Street, inclusion of a park and ride facility next to the terminus station, and provision of a future extension to the communities east of the municipality.

If construction begins in 2022, a Fraser Highway LRT line could potentially be open for service by 2027. It would be an extension of the same infrastructure laid out for the $1.65-billion, 10.5-km-long Surrey Newton-Guildford LRT project, which is expected to commence construction in 2020 for an opening in 2024. Procurement for the SNG LRT will begin later this year.