Speed and travel times are not a main priority for the design of Surrey’s rail rapid transit project, according to a planner with the City of Surrey.

Paul Lee, the municipal government’s program manager for the Surrey light rail transit (LRT) project, recently told Kwantlen Polytechnic University’s The Runner newspaper that the travel speed of the proposed ground-level train system is not a top consideration for the municipality.

“If you simply want to transport people at the fastest speed, and… affordability is not a consideration, then by all means, build SkyTrain,” said Lee. “A fast train is not what we want.”

He went on to emphasize the development potential that LRT would spur along the corridors it will be built on.

The project will be built in two phases, with the first phase being an 11-km-long, L-shaped line running between Guildford, Whalley, and Newton. It will have an end-to-end travel speed of about 27 minutes.

The second phase, which does not have a finalized technology, is a 16-km-long line along Fraser Highway from King George Station to Langley.

Both phases together are expected to cost at least $2.6 billion, with the first phase likely to come in at over $1 billion. 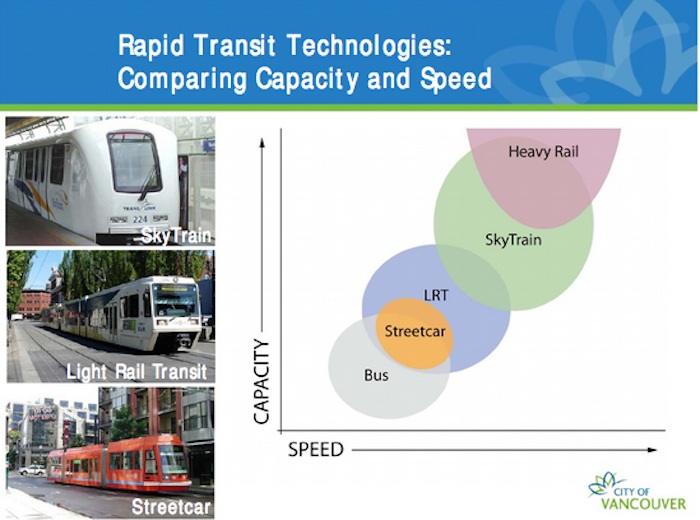 A comparison of the capable speed and capacity of SkyTrain, light rail transit, and streetcar. (City of Vancouver)

A previous study by TransLink that compared LRT, SkyTrain, and rapid bus alternatives for the project found that LRT has the worst cost-benefit ratio of all the options considered.

“One of the basic expectations surrounding major rapid transit projects in our region is that the service is faster than what it replaces,” Daryl Dela Cruz with the SkyTrain For Surrey advocacy group told Daily Hive.

“A system that is not ‘fast’ should not be considered ‘rapid transit’. The mistake in the Surrey LRT vision is that it advocates for street-level train lines which are still relatively costly to build, but they are not fast. This is not a good investment of the region’s money.”

The LRT project’s business case still requires approval from the BC Ministry of Transportation and Treasury Board.

When Daily Hive asked TransLink about how LRT aligns with the public transit authority’s mandate of enabling regional mobility and the movement of people and goods in an efficient and quick manner, a spokesperson said:

A number of factors led TransLink and the City of Surrey to determine that light rail is the best technology for King George Boulevard and 104 Avenue, including speed, capacity, technology, cost, and community planning.

TransLink is committed to improving transit in Metro Vancouver to keep people and goods moving quickly and easily around the region. TransLink works closely with municipalities to determine appropriate solutions that will address transit issues in local communities.

The Surrey-Newton-Guildford light rail project will provide fast and reliable transit well into the future while improving the livability of the region.