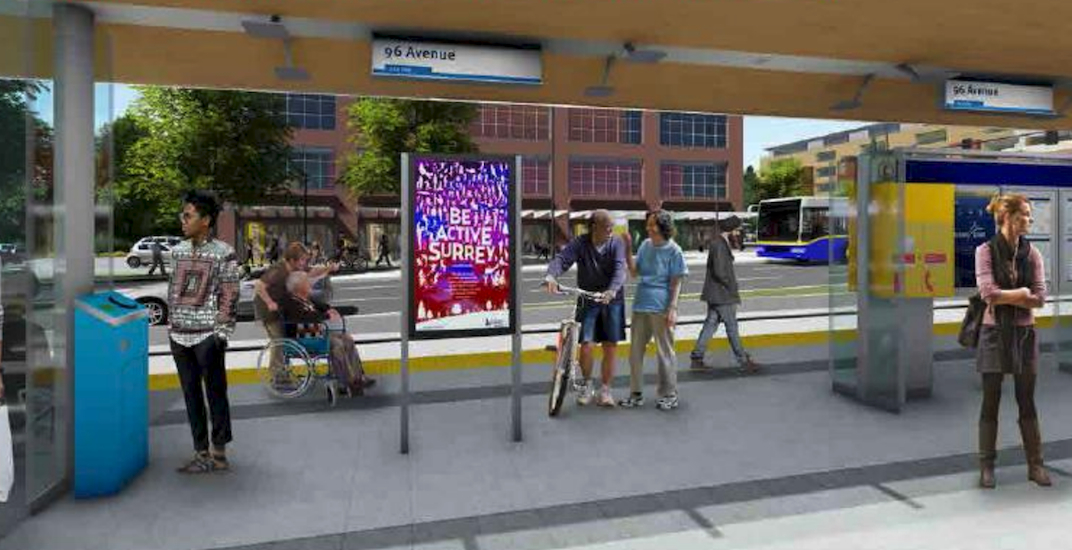 Earlier today, planners with the City of Surrey and TransLink provided an update on the 10.5-km-long, 11-station, L-shaped street-level light rail line that will run along 104 Avenue and King George Boulevard between Guildford Town Centre, Surrey City Centre, and Newton Exchange. This update marked the start of a new round of public consultation to be held over the next two weeks.

When SNG LRT opens in 2024, it will have an initial light rail train fleet of 16 low-floor vehicles, with each 30-metre-long, single articulated car train vehicle holding a capacity of about 200 passengers – approximately 80 more passengers more than a B-Line articulated bus.

Station platforms will be 60 metres long, allowing for the doubling of train lengths in the future. 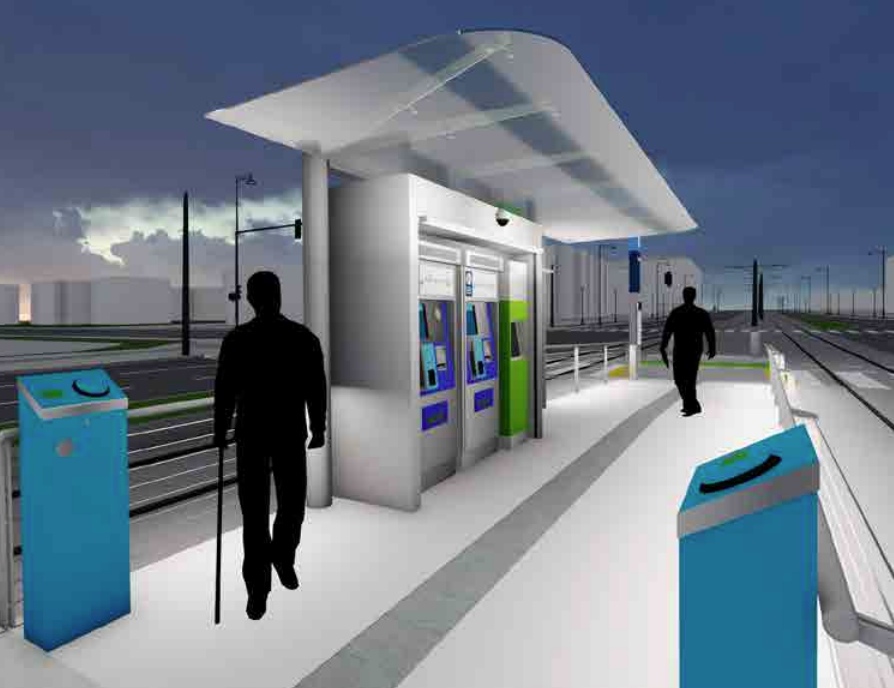 The carrying capacity of the system will be 2,040 passengers per hour per direction (pphpd) upon opening, and this could theoretically increase to an ultimate capacity of 6,000 pphpd with the operation of 32 two-car vehicle trains.

Comparatively, the Canada Line currently has a peak hour capacity of about 6,000 pphpd, with the ability to expand to up to 15,000 pphpd. The Expo Line’s current peak capacity is 15,000 pphpd, and it can be increased to at least 25,000 pphpd.

Trains on the SNG LRT will operate at a maximum speed of 50 km/hr given that the system runs at street level and must obey local traffic speed limits, although it will have its own transit-only lanes and extensive traffic signal priority. Its average operational speed will be 25 km/hr to 35 km/hr.

In contrast, SkyTrain’s maximum speed is 80 km/hr and and its average operational speed is 45 km/hr.

And the end-to-end travel time is projected to be 27 minutes, just two minutes faster than the existing 96 B-Line’s travel time of 29 minutes on the exact same route. 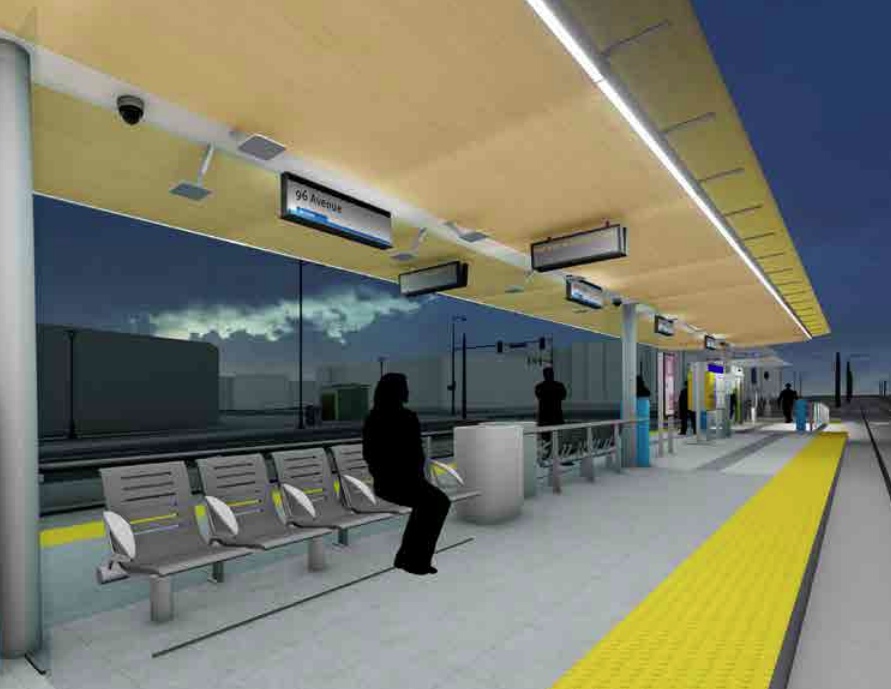 The SNG LRT will require its own operations and maintenance centre, which will be located at a large site on King George Boulevard in the Newton neighbourhood near the southern terminus of the line. 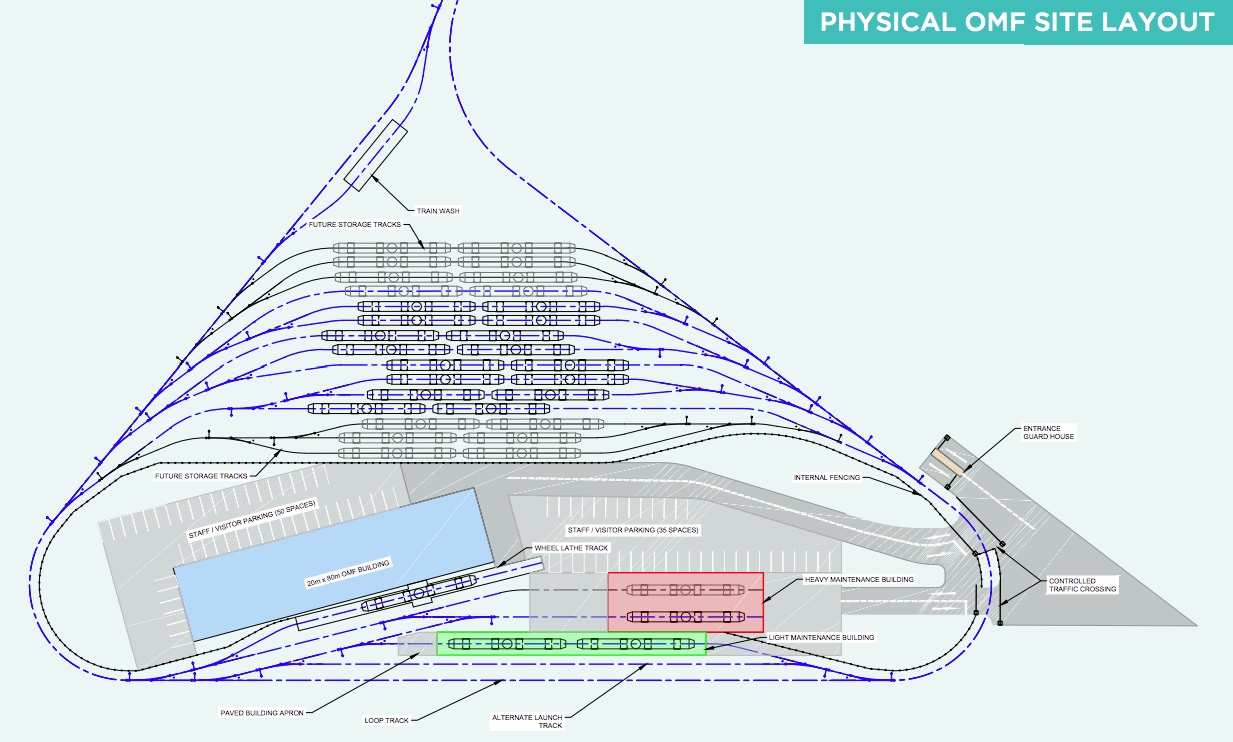 Layout of the Operations and Maintenance Centre for the Surrey Newton-Guildford LRT. (TransLink)

Following the previous round of public consultation, a number of changes were made to the system’s design to address some of the public’s concerns.

The roof structures of the stations have been extended to cover most of the platform area to better protect passengers from the elements, and ATMs, additional information boards, and bright LED lighting will be installed.

A number of safety and security elements will also be incorporated into the station designs, including SkyTrain station-like features such as emergency call phones, next train digital signage, and Compass Card validators. No fare gates are planned.

Diagram of a typical station for Surrey Newton-Guildford LRT. (TransLink) 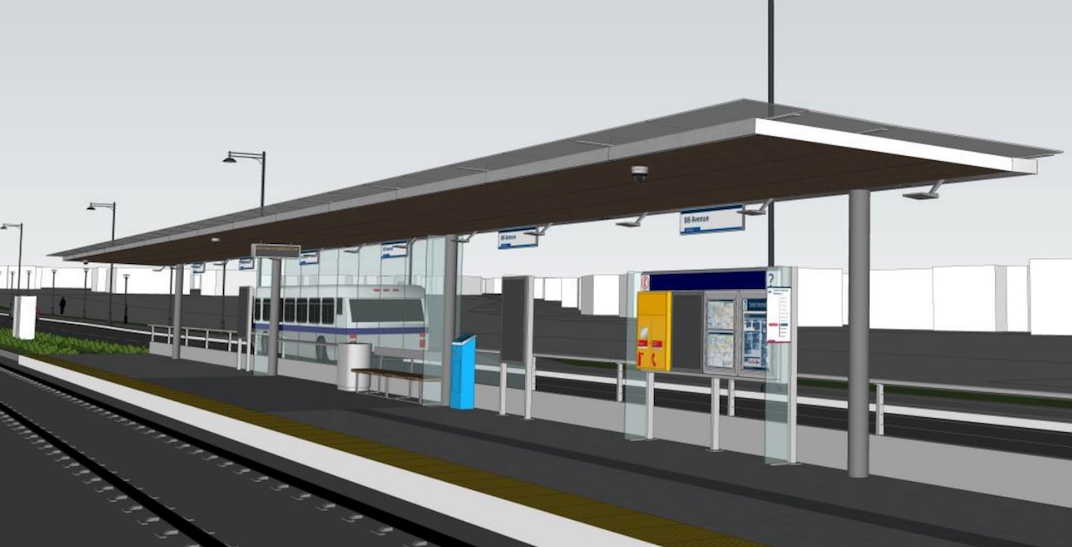 To protect passengers from train movements and the adjacent vehicle roadway, as the platforms are located either in the median or on the side of the road, the stations will feature safety rails and barriers on either side of the station access ramp and all side platforms adjacent to the roadways. 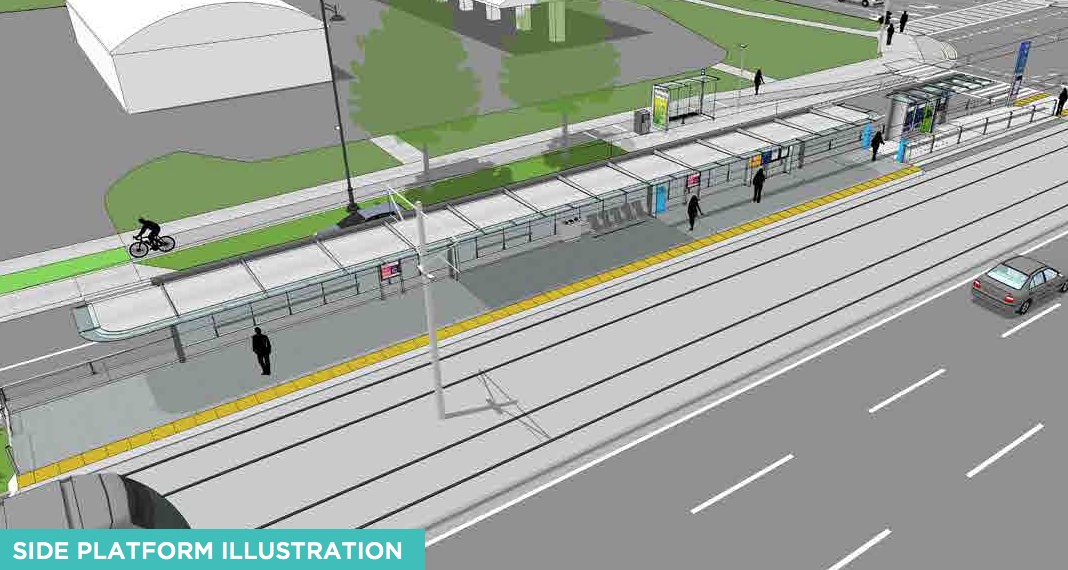 As for changes to road designs to increase road safety, the plan is to create dedicated crosswalks for cyclists at major intersections along King George Boulevard and establish protected green light left-hand turns where left hand turns are only allowed when signalled by the light.

To address concerns over heavy congestion, 104 Avenue will be retained as four lanes for 70% of the LRT path along the road, with the remaining 30% as two lanes with wider widths. It will also have the added improvement of more right-hand turning lanes.

Previous plans called for two lanes along the entire LRT stretch on 104 Avenue, which is a primary arterial route between Surrey City Centre and Highway 1. 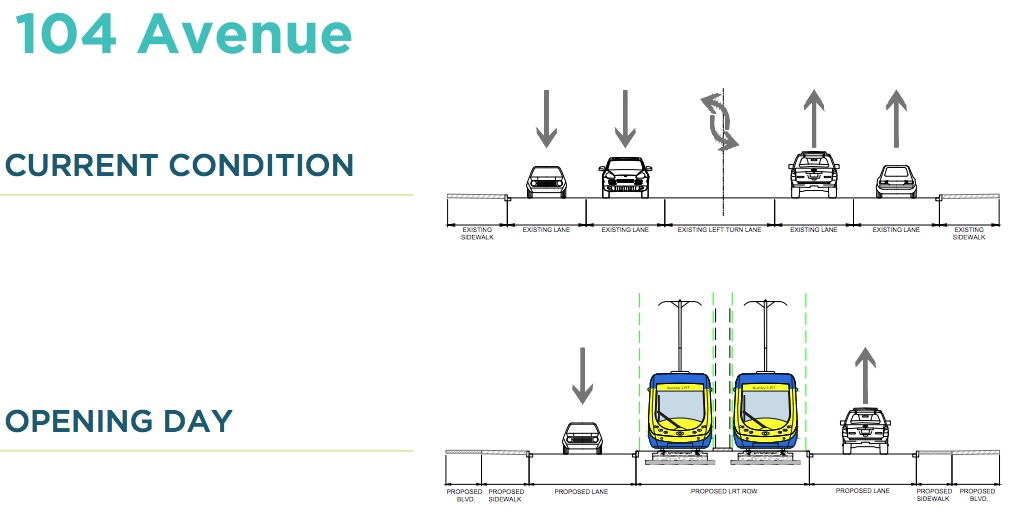 Before and after road configurations for Surrey Newton-Guildford LRT. (TransLink)

Before and after road configurations for Surrey Newton-Guildford LRT. (TransLink)

TransLink plans to work with emergency responders to create protocols that ensure the process to clear train collisions with pedestrians, cyclists, and vehicles is designed to be as quick as possible, so that train operations can resume shortly after an incident.

And as street-level light rail trains are new to the region, ICBC and Road Safety BC will be creating traffic safety education programs before the system opens for service.

During the construction phase, measures will be taken to ensure all businesses remain open and traffic keeps flowing. Construction on the roadways will occur over three stages to ensure a minimum number of lanes remain open while work occurs. A storefront project office and 24/7 information phone line will be established to address any public concerns and questions throughout construction.

If all goes as planned, with procurement starting in late-2018, construction will begin in 2019.

Meanwhile, the projected ridership of the SkyTrain’s Millennium Line Broadway Extension is 140,000 per day upon opening in 2025, and the Canada Line currently similarly carries about 135,000 per day.

The SNG LRT connects to SkyTrain at its interchange stations at Surrey Central and King George. 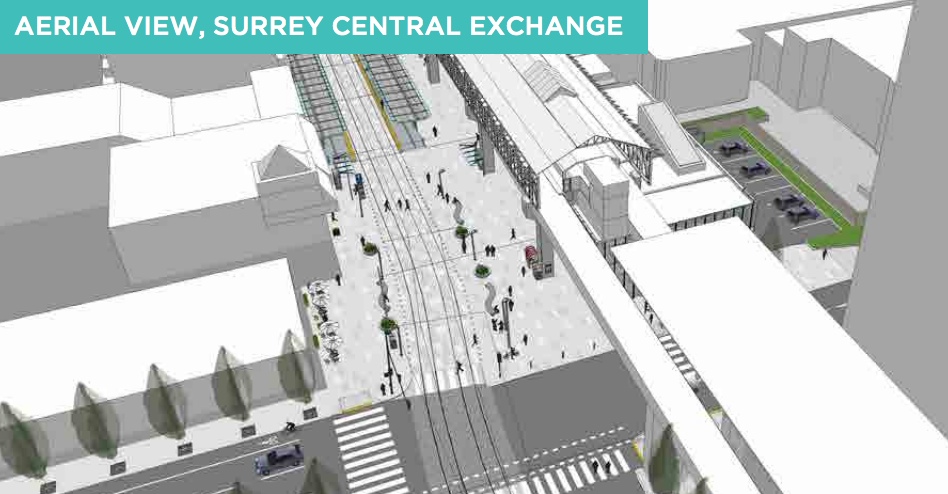 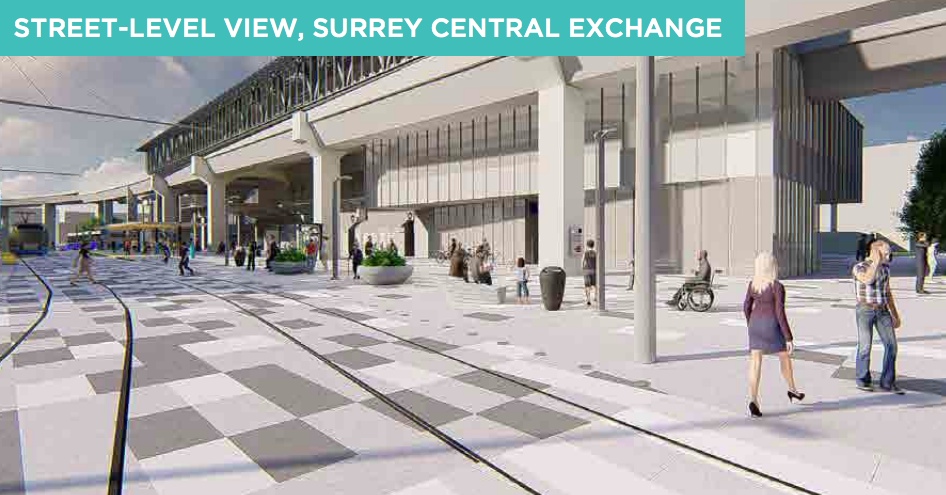 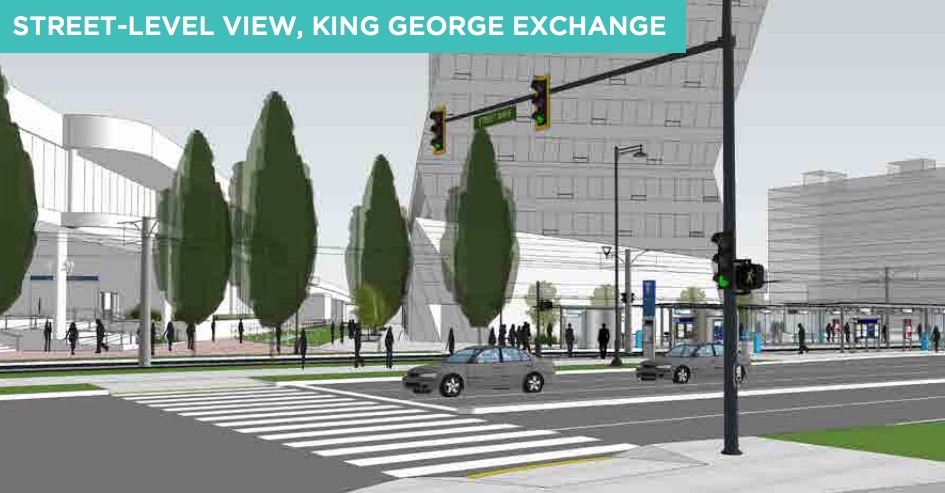 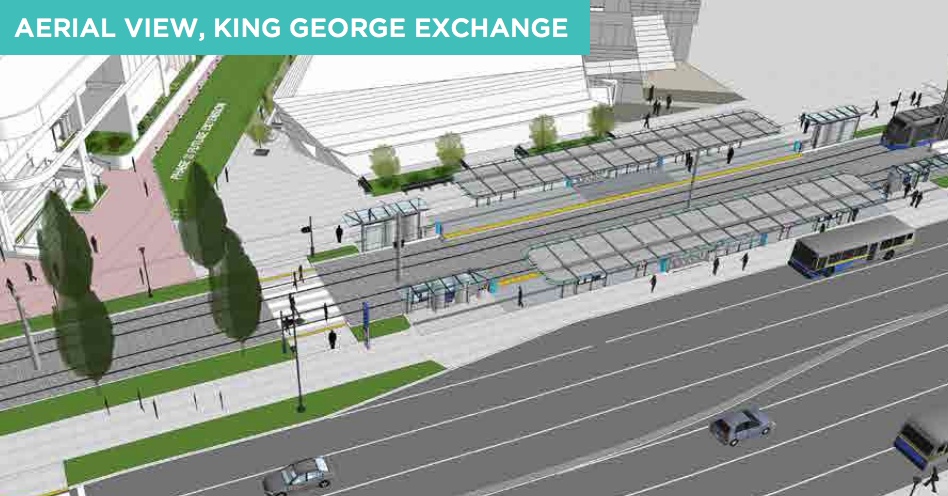