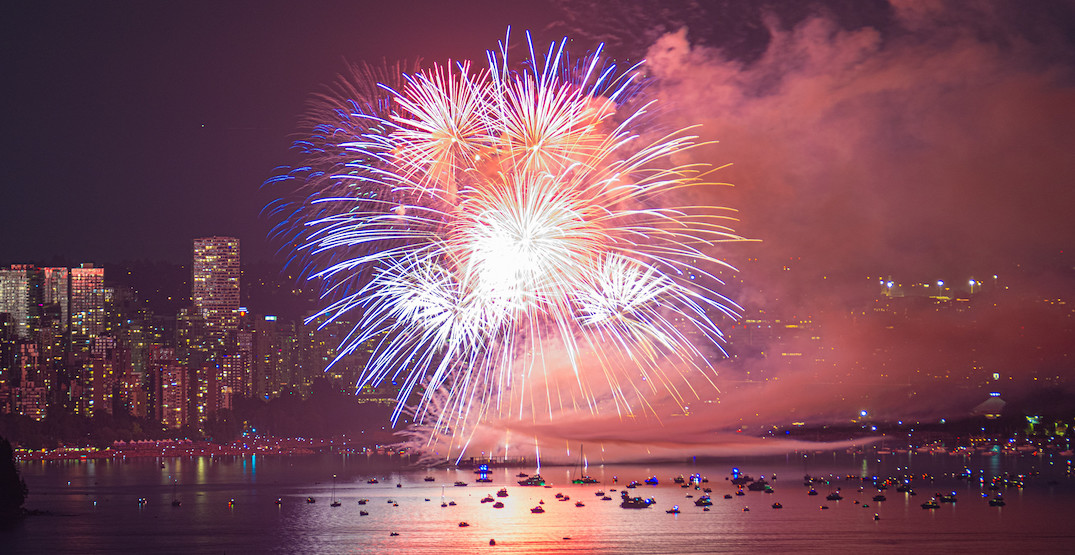 The decision has been made: Team Canada has won the championship title of the 2022 Honda Celebration of Light in Vancouver.

Midnight Sun Fireworks, a volunteer-based group of pyrotechnics experts from the Yukon, represented Canada in the fireworks competition on the second night, July 27.

While Akariya Fireworks participated in this year’s competition, they were not present on-site, instead relying on local organizers to assemble their show on the barge. The Japanese team opted not to attend due to strict and lengthy quarantine requirements upon their return home.

A panel of judges weighed each fireworks show based on the good balancing of show size (10 points), overall design and artistry (30 points), synchronization (20 points), originality of effects (15 points), quality of soundtrack (15 points), and the quality of fireworks and technical precision (10 points). Each show was scored out of 100 possible points.

“Canada executed their performance to near perfection, taking advantage of the barge space and maximizing the limitations of their equipment to deliver a show we’ll be talking about for years to come,” said Kelly Guille, president of Archangel Fireworks, which staged the fireworks competition on behalf of the local organizers.

“There wasn’t any moment that didn’t feel carefully curated – the visuals, soundtrack, and overall energy was utilized to its full potential. In fact, all three teams delivered performances that were indicative of the joy and excitement felt throughout this year’s festival. Congratulations to all the participating teams, we couldn’t have asked for more.”

Tonight’s Honda Celebration of Light by Team Canada 🇨🇦 even had a “Pirates of the Caribbean” ship battle! #CelebOfLight pic.twitter.com/xOz5vADMRa

Fireworks synchronized to the #YMCA 🏳️‍🌈 song is something you didn’t know you needed until now.

The show began with a “pirate ship battle” between two fiery ships perched on the fireworks barge, with the Pirates of the Caribbean film soundtrack cementing the theme of this segment.

Later on, the sequence transitioned to the supporting soundtracks of classic rock and disco songs, including the “YMCA” by the Village People. Rockets were used to literally spell out “YMCA” repeatedly.

Midnight Sun Fireworks put on their first pyromusical in their hometown of Whitehorse, Yukon, in 2014, and they won their first international fireworks competition at Fête du Lac des Nations in Quebec in 2017. The 2022 Honda Celebration of Light was the team’s largest pyromusical design yet, and their second championship title.

The Honda Celebration of Light is organized each year by the Vancouver Fireworks Festival Society and Brand Live. It is estimated that about a total of 1.3 million spectators attended this year’s three-night festival on the beaches, parks, and seawalls in and around English Bay.

“We’d like to extend a huge congratulations to team Canada for their award-winning performance at the 2022 Honda Celebration of Light,” said Michael McKnight, co-chair of the Vancouver Fireworks Festival Society.

“As we reflect on what was a truly marvellous 30th anniversary campaign, we are proud to have been able to return and put on a festival that is synonymous with the summer traditions of so many Vancouverites. We’re sincerely thankful for the incredible support of all those who attended this year’s event, and we’d also like to thank everyone working behind the scenes that made it successful.”