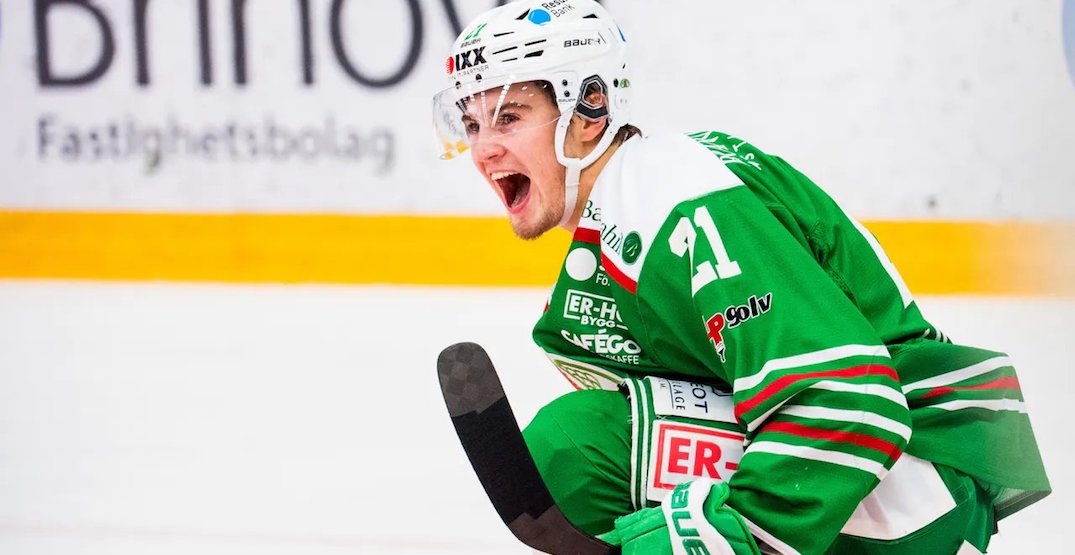 These are the dog days of November for Canucks fans, which is a phrase I don’t think we’ve ever uttered.

It’s been over two months since the Canucks played a game, and a month since the draft and free agency dominated the news. And given the uncertainty regarding when next season will begin, there’s not a lot to get excited about right now for local hockey fans.

Except of course, another edition of Snapshots!

It was a good day for the Canucks’ two most promising prospects today, as both Vasily Podkolzin and Nils Hoglander both had two-point games for their respective teams.

The highlight of the day came from Hoglander, the 19-year-old prospect who is on loan with Rogle BK of the Swedish Hockey League. Hoglander (#21) earned an assist after he danced into the offensive zone, drawing two players to him before a sweet feed to a teammate in the slot.

What a play by Nils Höglander!

He gets the primary 🍎assist🍎 on this power play goal after a couple great moves in the offensive zone.

Vancouver Canucks prospects are having a DAY today! pic.twitter.com/1KzklG8LhB

Hoglander added a goal, picking up a rebound by kicking the puck to his stick — and he made it look easy.

Another point for Nils Höglander as he finishes off the play.

The Canucks kids are alright this morning. pic.twitter.com/E3juTYlu4C

Hoglander also had three shots on goal in 14:37. The talented Swede now ranks fourth in scoring on his team, with nine points (2-7-9) in 13 games.

As for Podkolzin, the Canucks first-rounder was given a rare opportunity to succeed, and the 19-year-old took full advantage. Podkolzin played 12:55, which is the most ice time he’s received since COVID-19 put many of his teammates out of the lineup in late September, and he rewarded his coach with a goal and an assist.

Podkolzin scored on a wraparound in the second period:

Looky looky what a little deployment and confidence can do.

Vasily Podkolzin with the wrap finish. He has 1+1 on the day so far.

He also picked up the second assist on this goal:

Vasili Podkolzin (#92) with the 🍎assist🍎 on SKA's fourth goal of the game. pic.twitter.com/KW7Ze7YUq8

Podkolzin recently got a shot in the arm with an excellent performance at the Karjala Cup in Finland, despite the fact that Russia sent a U20 team to the men’s international tournament. He scored five points in three games for Russia, which included this beautiful shootout-winner:

It may not be long before we see one or both of Hoglander and Podkolzin in a Canucks uniform. Hoglander is eligible to play this season, though he probably needs some AHL seasoning before his NHL debut.

Podkolzin is eligible to play after his KHL season wraps up. Given his team’s last regular season game is on February 27 and the NHL season is likely to run late this year, Podkolzin could get into more NHL games than a normal season.

Given where he was drafted, it goes without saying that Podkolzin is an important prospect to the organization. As a gritty playermaker that plays a 200-foot game, Podkolzin could be the perfect compliment to Bo Horvat.

Given the apparent hole in the Canucks’ lineup, Podkolzin can’t arrive soon enough.

He’s not in the Canucks’ plans anymore, but this goal in the KHL by Nikolay Goldobin was a thing of beauty.

Opinion appears to be split with Canucks fans over their reverse retro jersey, which hasn’t been fully unveiled yet.

Details from the past. Remixed for the future. adidas #ReverseRetro coming soon. pic.twitter.com/WECPe9td9s

It appears the new threads will be a blue/green version of their early 2000’s alternate jersey, which featured a maroon gradient on a navy jersey.

I’ll reserve judgement on the new uniforms until I see them in full, but doesn’t it seem curious the Canucks will wear four different jerseys next season and the Flying Skate won’t be one of them?

The black, red, and gold uniforms were worn last year for the team’s 50th anniversary, but there are no plans to use them going forward.

I’m no mathematician, but if you’re selling a jersey so fast that your fans need to pre-order them during a pandemic, maybe it makes sense to keep wearing them.

It is back! Pre-order your #Canucks Black Skate Jersey in store or online at https://t.co/7X2Sql1auF pic.twitter.com/qz6G3aOMLk

I’ll give Bo and Holly Horvat a pass on this because of the pandemic.

Finally, happy birthday Elias Pettersson, who is providing us with lots of important off-season content.

How about a fun fact about Pettersson?

The second-year Canuck scored 18 points in his first postseason experience, which already places him tied for 25th in franchise playoff scoring. He just needs five more playoff points to crack the top 20 and he’s already more than halfway from catching Markus Naslund and Stan Smyl (33 points) for 13th all-time.