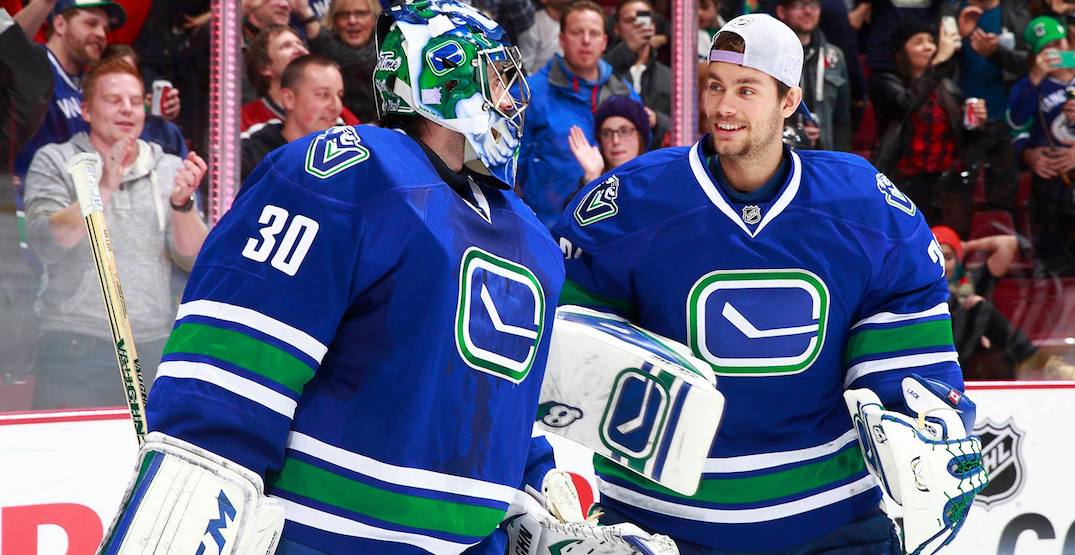 Is there anyone more consistently popular in the city of Vancouver over the years than the Canucks’ backup goalie?

It doesn’t seem to matter who it is, the backup inevitably becomes a fan favourite — sometimes involving fans chanting his name. The beauty of the position is it’s low pressure, as the No. 2 netminder isn’t relied upon to be “the man.” Plus, it’s really hard to let in goals from the bench.

With that said, let’s take a look at the top backup goalies in Canucks history, with a few rules.

First, only seasons as the “backup” count in this list.

So for example, Jacob Markstrom’s two seasons as Ryan Miller’s back up in 2015-16 and 2016-17 count, while his past three years as the Canucks’ starter do not.

We’ll define a backup as a goalie that played the second-most minutes in any given season, in addition to backups who wound up playing the most minutes due to trades or injuries.

With apologies to Frank Caprice, Troy Gamble, and Petr Skudra, here are the top 11 backup goalies in Canucks history.

For those wondering, @SNJohnGarrett was 4-5-1 in his first 10 starts with the #Canucks. pic.twitter.com/osUBTwLUyq

Before he became a lovable television broadcaster and hamburger connoisseur, John Garrett was technically an All-Star goalie with the Vancouver Canucks. Though he played in the 1982 NHL All-Star Game due to an injury to teammate Richard Brodeur, Garrett actually posted a winning record and a .905 save percentage in 1982-83, well ahead of Brodeur’s .873 mark that year.

In Garrett’s only other season as the team’s backup, he posted another winning record, 14-10-2, which was well ahead of the other goalies’ combined 18-29-7 record.

Glen Hanlon served in many roles with the Vancouver Canucks, starting as a backup in 1978-79, before supplanting Gary Bromley as the starter the following season. He played the third-most minutes in 1980-81, and was the backup in 1981-82 until he was traded to St. Louis in March, narrowly missing Vancouver’s run to the Stanley Cup Final.

Roberto Luongo is unquestionably the best goalie in Canucks history, but he’s not the best backup of all-time.

Luongo played precisely one lockout shortened season where he was considered the Canucks’ backup, in 2013. In just 18 starts, Luongo posted a 9-6-3 record, with a .907 save percentage. It was his worst season in Vancouver, by his high standards.

Thatcher Demko had an up and down season in his first full year as the Canucks’ backup goalie, but his spectacular three-game run in the playoffs rockets him up the charts. It’s an absurdly small sample size, but he currently holds the franchise record for all-time playoff save percentage, with an eye-popping .985 mark.

“Backup Bob” gets extra marks for his cult hero status, which was cemented in his only season with the Canucks in 2000-01. Essensa actually wound up playing the most games of any Canucks goalie that season, but was the backup until Felix Potvin was run out of town.

Fans chanted Essensa’s name that season, as he was the only Canucks goalie to post a winning record (18-12-3), leading the team to their first playoff appearance in five years.

Corey Hirsch was a reliable backup for the Canucks, appearing in 101 games with the franchise. His best year came in 1995-96, when he outperformed starter Kirk McLean, posting a better save percentage (.903) and goals against average (2.93), as well as more wins (17) in just 38 starts. He went on to start five of six playoff games that year, in place of McLean.

Before entering the Vezina conversation, Markstrom was a steady young backup goalie, playing behind Ryan Miller. In 2015-16 and 2016-17, there wasn’t much of a drop off from Miller to Markstrom, which was reflected in his combined .913 save percentage, which was just two points lower than Miller’s (.915).

Kay Whitmore was once so highly thought of, that the Canucks traded away longtime defenceman Doug Lidster for John Vanbiesbrouck to avoid having to give up Whitmore in the 1993 expansion draft. Whitmore posted better numbers than McLean, albeit in fewer games (31), in 1992-93.

Alex Auld had a very unusual tenure as a backup in Vancouver.

The team’s third-string goalie in 2003-04, he leapfrogged No. 2 netminder Johan Hedberg to play three playoff games that year after Dan Cloutier got hurt. Auld entered 2005-06 as the No. 2 option, but appeared in 67 games after Cloutier was injured again early in the year. Though he couldn’t get the team into the playoffs, Auld was named team MVP after the season.

Eddie Lack was so good in his rookie season that then-Canucks coach John Tortorella decided to start him in favour of Luongo in the Heritage Classic. While that may have been misguided, Lack finished with a .912 save percentage in 37 starts that season. He was even better in his second season, posting a .921 save percentage in 35 starts, leading the Canucks to the playoffs while Miller was hurt.