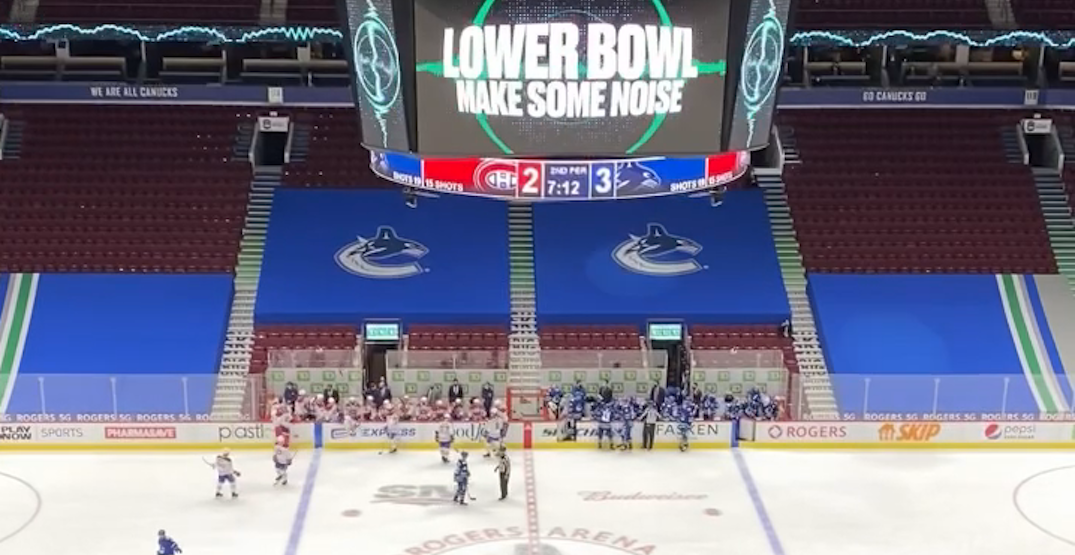 It was a Vancouver Canucks home opener like no other.

And that may have been true even if there were fans in attendance.

The first game at Rogers Arena in 316 days, the Canucks and Montreal Canadiens played a highly entertaining game, with back-and-forth action, ending in a 6-5 shootout win for the Canucks.

Off the ice, it was the first opportunity to see what the Canucks had up their sleeves to put on a show, for those watching on television and the few people in attendance, which included only team staff, volunteers, and assembled media (including yours truly). Health screening at the door, mandatory mask-wearing, and physical distancing was in place for everyone on hand.

Much of the show is unchanged. There’s still a lot of pomp and circumstance before puck drop, with a pre-game hype video, and light/smoke show. PA announcer Al Murdoch still introduces the team as they hit the ice, and Barron S, the team’s DJ, is still filling the arena with music.

New this year is a land acknowledgement, which came on the same night that goaltender Braden Holtby debuted his new mask, which was designed in collaboration with an Indigenous artist. The camera-facing seats have tarps covering them, with Canucks logos behind both benches, and sponsor logos on the seat covers behind each net and in the corners.

The national anthem was sung by a pair of frontline workers — a nurse and her partner, who works in childcare. Instead of it being performed on the ice, it was sung from the upper bowl, as a health and safety precaution.

They still crank the siren too, as a husband and wife duo — a firefighter and nurse — did the honours.

You’ll see fans with jerseys walking outside the arena before the game, but they’re on their way to the Rogers Arena Sportsbar, a restaurant open to the public which has televisions playing the game, but the curtain drawn blocking any views of the ice surface.

You know the fake crowd noise? That’s not just a thing you can hear on TV. It plays in-arena, annoying some of us in the media, but also removing potentially awkward silences for the few people on hand.

Fake #Canucks crowd is really getting into it pic.twitter.com/9oMQjXfrXH

Canucks rookie defenceman Jalen Chatfield took it one step further, saying that the fake crowd “kind of gets you going a little bit,” after the game. It was his first NHL game, so he wasn’t about to complain about anything.

But perhaps the funniest moment came during a third-period commercial break. With nobody in the stands, the video board invited everyone to “make some noise” while some serious pump-up music blared.

Hey, it’s nice to see the game presentation team has a sense of humour.

The third period singalong is still a thing — sort of — as a video of “Nearly Neil” serenaded those on hand with a rendition of “Sweet Caroline.”

Was it weird being at a game with no fans? Of course. But at the same time, it kind of felt right.

I don’t know if “nature is healing,” but either way, it’s nice to have hockey back at Rogers Arena.