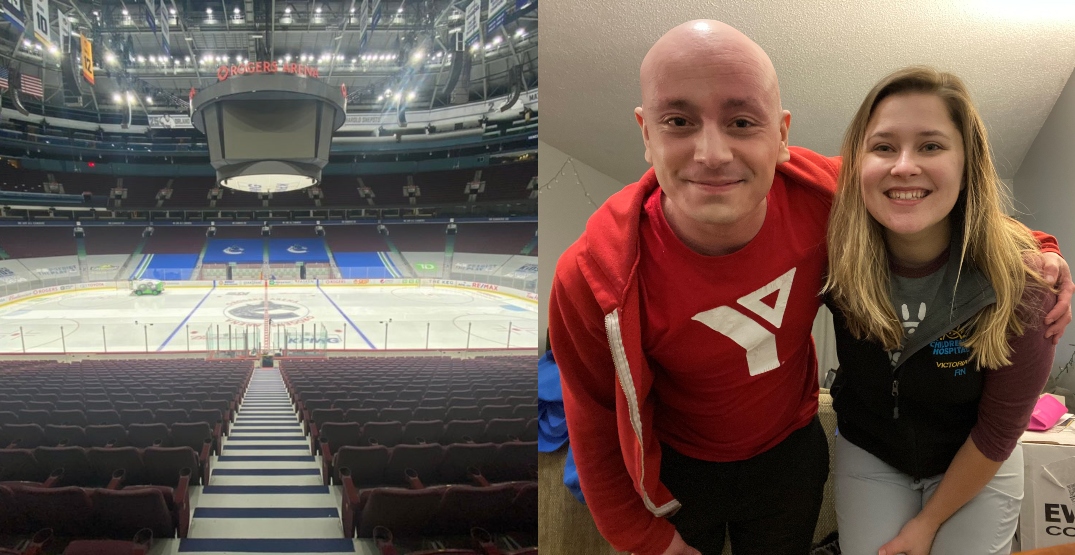 Victoria Groff and Chris Clute will be singing O Canada at the Canucks home opener tonight.

For the first time in 316 days, the Vancouver Canucks will play a National Hockey League game at Rogers Arena.

For the first time in 316 days, the #Canucks play a game at @RogersArena. pic.twitter.com/ZCQ5fwuIhf

While the seat coverings are in, and no tickets are allowed to be sold to this game, there will be some special guests in attendance.

The Canucks are incorporating frontline workers into tonight’s pre-game ceremonies.

Cranking the siren will be Amanda Kopchia, a registered nurse at Peace Arch Hospital, and her husband John, who is a firefighter with Vancouver Fire Rescue Services.

Tonight’s national anthem will be sung as a duet, by Victoria Groff, a registered nurse at BC Children’s Hospital, and her partner Chris Clute, who works at the YMCA in child care. Groff has experience singing anthems for the Vancouver Canadians, while Clute collaborates with local production duo Sound of Kalima.

The couple has been singing together a lot during quarantine, and of course, they’ve been practicing O Canada quite a bit since being asked to sing at Rogers Arena.

Certainly, it’s been a difficult 10 months for these essential, frontline workers.

Apart from having to spend extra time putting on PPE and wearing a mask for 12 hours a day, Groff told Daily Hive that at times during this pandemic, she has been “really scared” about potentially infecting others.

“I felt like I had to be careful, not just for me and my family, but also my patients,” she said.

Other challenges, Groff said, included how the couple interacted with children at their jobs.

“I found that you had to learn how to communicate differently with different kids when you’re wearing a mask all the time, or kids that are hard of hearing, you have to learn different ways to communicate with them or with their parents.”

On the prospect of performing in front of 18,000 empty seats tonight, Clute said it might be a little “strange.”

“But I mean, we haven’t performed in front of a full stadium either,” he joked. “We’ll still be performing for the players.”

“I think we’re just going into it with a pretty positive outlook and we’ve practiced a lot. We love singing. We love watching hockey, so we’re just excited for the experience. I think it’s gonna be really good.”

For fans of Marie Hui, so far, she’s scheduled to sing at least three times this season, with her first game set for Thursday next week. The Canucks cut ties with their previous go-to anthem singer, Mark Donnelly, after he lent his support to an anti-mask rally last month.