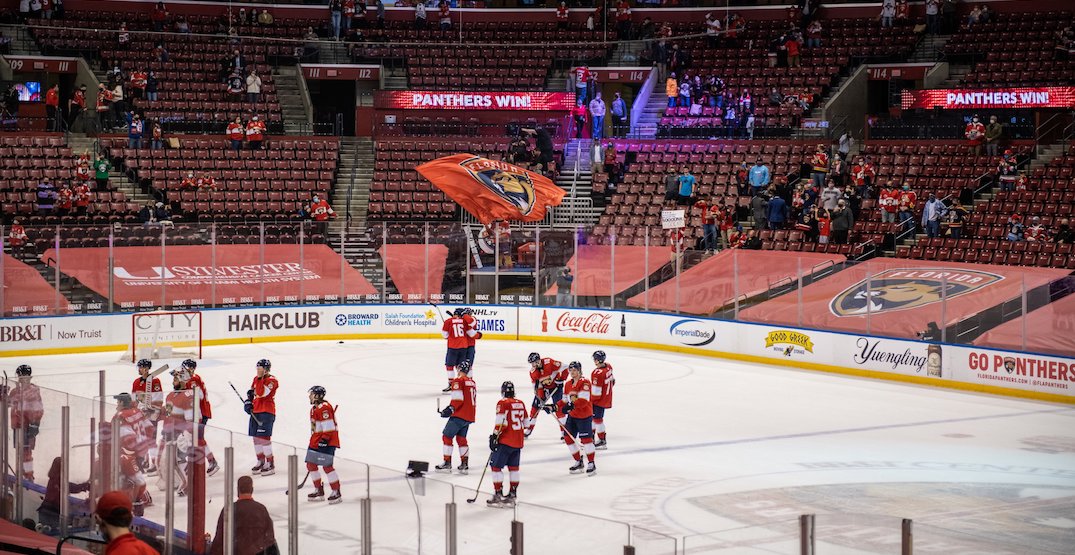 The NHL is back, but the games look different.

The most obvious change is in the stands, as most of the NHL’s 31 teams — including all seven teams in Canada — are not allowed to host fans at games.

However, some teams south of the border have had clearance from their local health authorities to have a limited number of fans at home games.

So far, just three teams — the Dallas Stars, Florida Panthers, and Arizona Coyotes — have the ability to sell tickets, with varying levels of capacity.

Other teams have allowed friends and family, as well as first responders, into arenas.

The Panthers opened their season with 25% capacity, with just 4,147 fans in attendance during their home game on January 17.

Some new health and safety protocols include cashless orders on concessions, contactless ticketing, and further health screening questions before entering the arena.

Fans are sitting in socially distant in-bowl pod seating to ensure all fans are seated at least six feet apart.

Today’s Florida Panthers vs #Blackhawks game at BB&T Center was the 3rd game this season with a public fan attendance, drawing a crowd of 4,147 (21.5% capacity, max allowed is 25%). #FlaPanthers pic.twitter.com/wFVjFm6hNu

Florida panthers have the same amount of fans in the stands this year as they did last year 👍🏻 pic.twitter.com/U8veko9NFz

The Coyotes have started the season with a maximum of 3,450 fans allowed for their home games in Arizona.

At games, Arizona fans are encouraged by the team to download an app that helps to verify the identities of people who come to games and give attendees the ability to answer health screening questions to enter. The app was one of the critical parts used as part of the NHL playoff bubbles in 2020 and adapted for Coyotes home games.

Great action packed night at the @ArizonaCoyotes game!🏒 So nice to have NHL back. This young team has a lot of potential! We have highlights this morning on GMAZ! pic.twitter.com/Wx8Z6awHfc

Excited to finally be back in our favorite arena!! Gila River, we've missed you so much!! So excited to cheer on our coyotes alongside my daddy!! #DaddyDaughterDate #LetsGoYotes @NHL @ArizonaCoyotes pic.twitter.com/Og6jXX3jTA

Dallas put a 30% cap on attendance with around 5,000 fans being allowed to enter. However, due to an outbreak positive COVID-19 cases within the team, their season will not begin until January 22.

The Stanley Cup champion Tampa Bay Lightning were planning on having fans to start the year, however, due to the rise in coronavirus cases in the Tampa area, fans are no longer allowed at Amalie Arena.

Although paid attendance will not be allowed at most arenas, some teams are inviting special guests to watch the games live.

The Blues, who are allowing fewer than 300 fans to their games in St. Louis, are having medical workers and public safety employees attend.

“We are proud to welcome this group of local heroes as our guests to the arena as a way to express our admiration and appreciation for their selfless work to keep the St. Louis area healthy and safe,” said Blues President of Business Operations/CEO Chris Zimmerman.

The Blues will no longer permit bags inside the arena, and concessions/retail locations will now be cash-free.

The Nashville Predators decided to honour first responders by inviting them to their home opener. They also honoured first responders who helped evacuate citizens prior to the Christmas Day bombing in downtown Nashville.

The Detroit Red Wings are allowing up to 250 fans, but only people who are friends and family of players, coaches, and staff.

Ottawa Senators owner Eugene Melnyk put out a plan that would have 6,000 fans attend but quickly retracted the article and released a new statement that said the time was “not right” to have fans in the stands.

Most arenas, however, are without anyone in the arena seats, leaving ice-level staff to cheer on the team, as was the case in New Jersey.

Arena staff are loving it pic.twitter.com/dtaCTk0Jz3

Many NHL teams are playing the waiting game as new guidance from state and local governments will dictate if, when, and how many fans can attend games.

Teams like the Columbus Blue Jackets and Pittsburgh Penguins need to have clearance from local authorities to play. However, NHL Deputy Commissioner Bill Daly hopes those two teams will have in-person attendance soon according to Sportsnet’s Chris Johnston.

Having fans in the stands allows those teams to recoup some of the lost revenue due to the pandemic and will keep teams from losing even more than the $1 billion NHL Commissioner Gary Bettman said the league is expected to lose during the 2020-21 season.