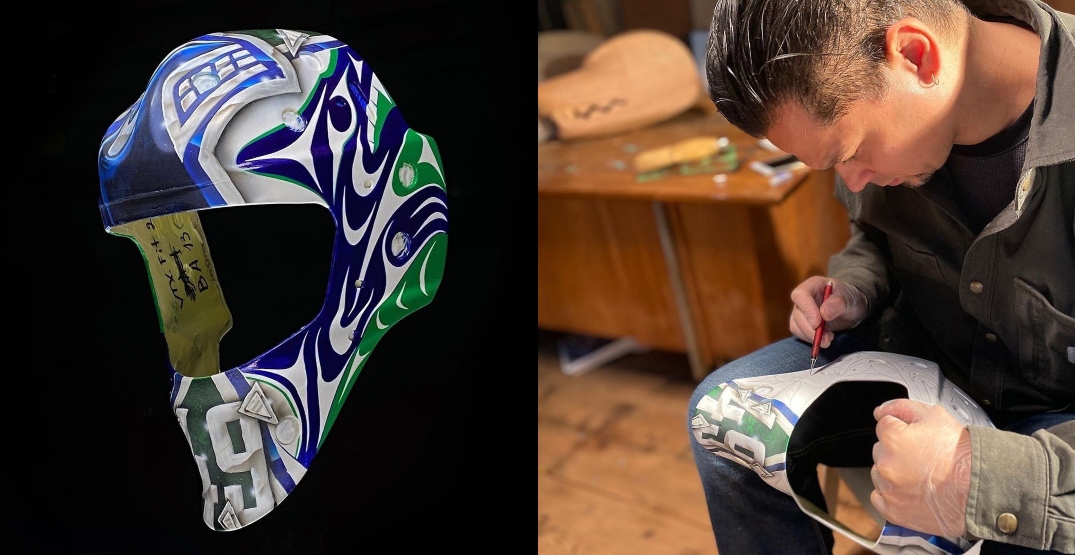 After his first goalie mask drew criticism due to cultural appropriation, Braden Holtby’s new Canucks lid is a work of art that everyone can enjoy.

Holtby quickly apologized for the first mask, which featured First Nations-style artwork but did not involve an Indigenous artist. The new Canucks goalie made his debut last night, helping Vancouver to a 5-3 win, wearing another temporary mask while a new mask is being worked on.

The new mask is a collaboration between Coast Salish artist Luke Marston and Swedish artist David Gunnarsson, who specializes in goalie mask artwork. It’ll debut in games soon, the Canucks announced on social media, adding it’s “inspired by the legend of the orcas and the wolves, transforming in packs to hunt the land and in the ocean.”

This beauty will debut in games soon. 😍

For now, enjoy a sneak peek of Holtby’s new mask – a collaboration between Coast Salish artist, Luke Marston, & @daveartofficial. Inspired by the legend of the orcas & the wolves, transforming in packs to hunt the land & in the ocean. pic.twitter.com/64xiXMAcWB

“It was lovely to collaborate with Coast Salish artist Luke Marston to create Braden Holtby’s new Canucks mask,” Gunnarsson said in an Instagram post today. “My new friend Luke painted this awesome art on the sides of Braden’s mask, and I painted a clean Canucks logo design on the top and chin with Braden’s number.”

“It has been an exciting couple of weeks,” said Marston on his Instagram page. “Thank you to Francesco Aquilini, [Johnna Sparrow-Crawford], Braden Holtby, and [David Gunnarsson] for the opportunity to collaborate and create a new mask.”