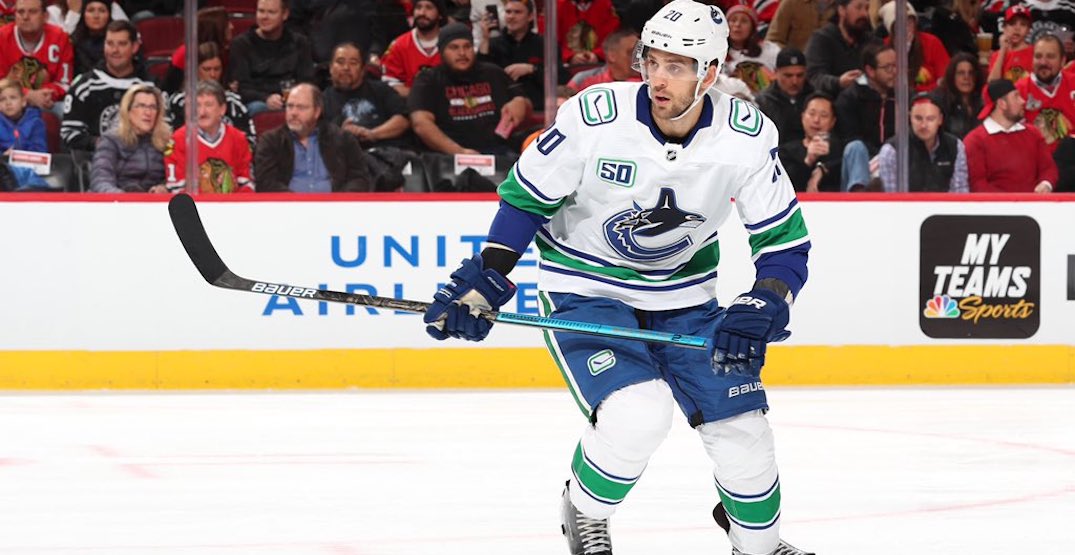 Ten NHL teams have chosen to buy out one of their players this offseason, but the Vancouver Canucks aren’t one of them.

At least, not yet.

On the surface, it’s a curious move. After all, the Canucks are suffering a salary cap crunch, with Benning admitting that he was going to try to shed salary.

“We’re going to just have to decide what players that we want to sign here going forward. And other players maybe can move on and recover draft picks. That’s the circle of life in our business,” Benning said at his end-of-season media availability last month.

“I’ve already started talking to GMs on the weekend,” he said in an interview with Sportsnet 650 on September 8. “I’ve had a couple calls this morning. I’m going to continue to touch base with all the GMs in the league and just try to figure out what the marketplace looks like, if we’re able to move money out, what it looks like. I’m going to be active in that market if we can be.”

Needless to say, the Canucks did not recover any draft picks. They also weren’t able to move out salary in a trade. In fact, they’ve done just the opposite, adding Nate Schmidt and his $5.95 million cap hit for a third-round pick — though that was a positive move for the team.

The only salary-shedding that’s taken place has been in the form of losing free agents to other teams. Jacob Markstrom and Chris Tanev are now members of the Calgary Flames, getting money and term that was too rich for the Canucks to afford. They also lost Tyler Toffoli (Montreal) and Troy Stecher (Detroit), who signed elsewhere for reasonable money and term.

The Canucks appear to be nearly done with their offseason tinkering, but there’s still one major move left to be made.

Jake Virtanen is the lone unsigned restricted free agent left, among Canucks regulars. He has an arbitration date set for next week, on October 28, with the team and player ideally coming to an agreement before then.

Whenever Virtanen signs, it will put the team over the salary cap, even if they decide to send players like Loui Eriksson or Sven Baertschi to the minors.

There’s the potential for Micheal Ferland to go on long term injury reserve, saving $3.5 million on the cap, but they likely won’t have that assurance before camp. If Ferland tries to play again, and that seems likely, the Canucks will need to prepare for next season with his money on the books. And they’ll need to shed some salary.

The Canucks would surely like to move one of their many undesirable contracts, but that would necessitate adding a sweetener in the form of a draft pick to get it done. They could move a player like Virtanen or Tanner Pearson in a trade to save money, but that would make them paper thin at forward.

Then there’s another option: a buyout.

While the regular buyout window has come and gone, the Canucks will have one more opportunity to rid themselves of a contract whenever Virtanen signs — whether that gets decided in arbitration or both sides settle on a deal beforehand, according to CapFriendly.com.

Teams that have a player that files for arbitration are allowed to perform a buyout outside of the regular window, in order to become cap compliant. That window will open three days after Virtanen signs, for a period of 48 hours. The catch is that the player being bought out needs to have a cap hit of at least $4 million.

Because the structure of Eriksson’s deal is virtually buyout proof, that makes Brandon Sutter the lone buyout candidate.

Buyouts aren’t a get-out-of-jail-free card, as two-thirds of the remaining contract value counts against the cap, spread out over twice the remaining term left.

For Sutter, this means his cap hit would drop from $4.375 million to $2.042 million next season. The catch is that instead of being done with Sutter’s contract forever after next season, the Canucks would add $1.167 million of dead money on their books for the 2021-22 season — a year in which they need to give big raises to Elias Pettersson and Quinn Hughes.

But given the options available to the Canucks at this point, buying out Sutter may still be the most palatable.

The above roster would still allow room for an affordable free agent defenceman, provided the cap hit is below $1 million.