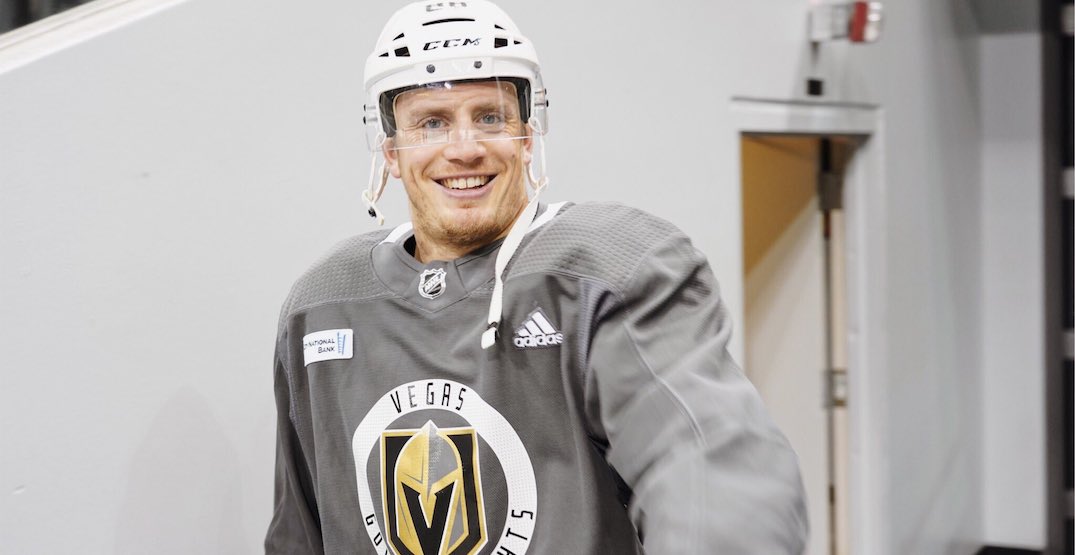 When the Canucks announced that they had acquired Nate Schmidt from the Vegas Golden Knights, fans were excited.

They knew all about the player — a 29-year-old top pairing defenceman that’s talented offensively and good in his own end.

I’m not sure as many people knew about his personality, because let me tell you, he is a beauty.

Schmidt met with the Vancouver media via Zoom on Tuesday for the first time as a Canuck, and he’s already the best quote on the team.

His Zoom call lasted more than 25 minutes, which may be a club record. His answers were long and thoughtful, and he couldn’t wipe a big grin off his face, despite admitting that it was hard getting the news that he had been traded.

Schmidt has already smiled more than every other #Canucks player combined on Zoom calls since March. pic.twitter.com/XvpxKd5DC7

“(Getting the news) last night was hard,” said Schmidt. “You put down some roots in a place, you’re there from the beginning, which is always something special. Not many guys can say they’ve been at a place from the ground up.”

Schmidt arrived in Vegas three years ago in the expansion draft when he was left unprotected by the Washington Capitals. One of the “Golden Misfits,” he quickly established himself as a bonafide top four defenceman and set career highs in games played (76), goals (5), assists (31), and points (36) in his first season in Las Vegas.

The native of St. Cloud, Minnesota was a salary cap casualty, with the Golden Knights needing to shed his $5.95 million cap hit after they signed UFA defenceman Alex Pietrangelo.

If Schmidt was feeling sad about having to leave a Stanley Cup contender, he hid it well. But honestly, I don’t think he’s that good of an actor.

Wearing a blue “Fargo Force” sweatshirt, which he made sure to show off because it was the closest he had to Canucks colours, Schmidt oozed charisma.

And he already loves Vancouver, apparently.

“Vancouver has been my favourite place to come visit on the road. It’s always my favourite city. Always a buzz around the rink. You’ve got a passionate fanbase,” said Schmidt. “With each hour, the excitement has been building with the opportunity to be in a Canadian market and play for a team that’s got a lot of talent.”

All players say they’re excited to join a new team, even when they aren’t. But few share details about the new city’s Christmas market.

“They have this awesome Christmas market that I buy my mom ornaments from every year and I bring them home.”

Who’s going to tell him it’s closed this year?

At one point Schmidt was interrupted by a phone call.

“That’s a landline my mom and dad have,” he said, laughing.

Seriously, this guy’s going to be a lot of fun to have around for the next five years.

On the ice, Schmidt will provide a big boost to the Canucks’ back end. He’s a left shot, but has no problem playing the right side, which is where he’s expected to slot in on Vancouver’s defence.

Whether he plays with Quinn Hughes or Alex Edler, Schmidt’s pairing is the likely choice to play in a matchup role.

“I take pride in playing against the other team’s top lines and doing my damndest to shut guys down as best you can and give our guys an opportunity to be successful in their own right.”

If you want the scouting report on Schmidt, he’ll be glad to give it to you.

“Be rock solid, keep my feet moving, defend hard, eat a couple pucks for dinner, and just be ready to step into a role where I might be one of the oldest guys on the team.”

Yes, he said “eat a couple pucks for dinner.”

He also admitted to calling for pucks with a type of “battle cry,” that The Athletic’s Thomas Drance picked up on watching games in the bubble.

“Don’t tell anybody, but they pay me to have fun every day.”

Off the ice, Schmidt should fit in well. He knows Jay Beagle and new goaltender Braden Holtby from his Washington days, and described Holtby as one of his best friends in hockey.

Certainly, he knows all about the Canucks, playing seven games against them in the playoffs, not to mention four times a year as a division rival during the regular season.

“I can remember Mr. Petterson spinning me into a top last year,” he said, adding he was happy not to have to face him any longer.

He may eat pucks for dinner on the ice, but he’ll dish jokes in the dressing room.

“I hope the guys aren’t too sensitive about me being loud and goofy sometimes.”

If he can charm his teammates like he did the media, there should be no problem there.