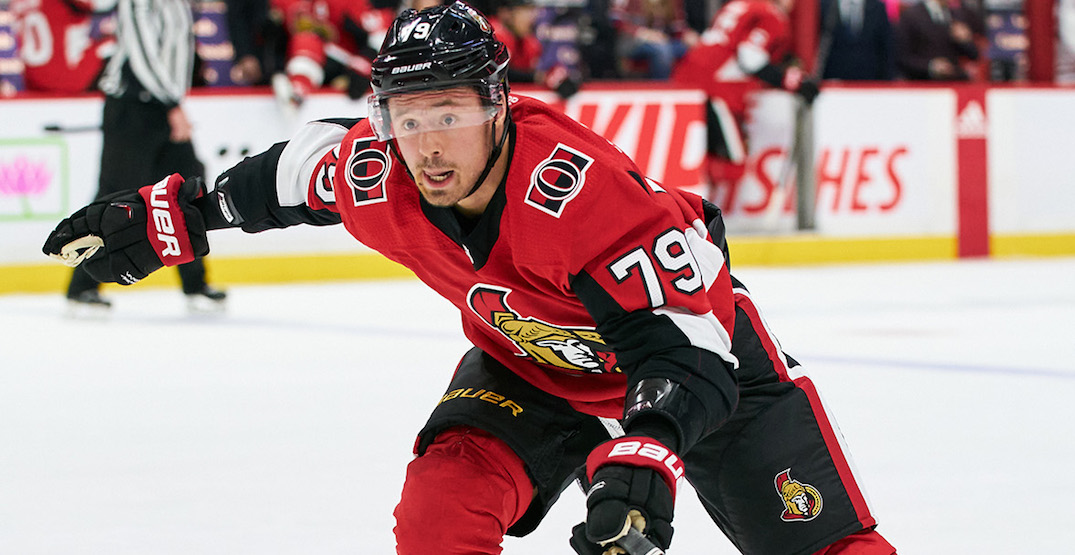 New Canucks winger Jayce Hawryluk met with the media on Monday, likely facing more questions in one day that he would in a month while a member of the Florida Panthers.

Among the topics he discussed was a terrifying experience back in March, when he was with the Ottawa Senators.

Five Senators players and one staff member tested positive for COVID-19, likely contracting the virus during a road trip in California. Among them was Hawryluk, who is one of very few NHL players to publicly disclose a positive coronavirus test.

Hawryluk’s last game in LA on March 11 came the same night that the NBA suspended its season, and turned out to be the last NHL game played during “normal” times. Feeling more fatigued than usual during that game, Hawryluk later told Thomas Drance of The Athletic that he now believes he played the game with COVID-19.

The 24-year-old from Yorkton, Saskatchewan admits he was scared.

“When I came in contact with it, obviously it was a scary feeling. There’s a lot of unknown that come with it, and I think that was probably the scariest thing,” Hawryluk said during Monday’s Zoom call.

“I didn’t go to the hospital… I wasn’t dying or anything, but it’s still scary. You see all the numbers out there of people dying. You’ve got to take this thing seriously.”

“It’s definitely something I was terrified and scared about, but it’s over now. I’m just thankful that I’m ok.”

The NHL paused its season just as Hawryluk was finding his groove.

Having been picked up off waivers by Ottawa in February, Hawryluk was finding his groove with his new team. Seeing an immediate uptick in ice time with the Senators, he tallied seven points in 11 games. Because the Senators weren’t among the 24 teams that participated in the NHL’s restart this summer, Hawryluk has now gone more than seven months since playing a competitive game.

“Last year was definitely a crazy year, obviously getting picked up by Ottawa on waivers and joining the team there. They gave me a great opportunity to play and show my potential and what I can do out there.”

A big part of Hawryluk’s decision to sign with the Canucks in free agency has to do with the team’s belief in him as a player.

“They’ve seen potential in me,” he said.

Before Jim Benning’s first draft with the Canucks in 2014, Hawryluk said that Vancouver was one of the teams that expressed the most interest in him. He wound up getting taken 32nd overall by Florida, four picks before the Canucks chose Thatcher Demko with the 36th pick.

As for what kind of player the Canucks are going to get, it seems likely that Hawryluk will fit well into the way that Travis Green likes his players to play. And if he sticks in the lineup, bet on the hard-working, trash-talking agitator to become a fan favourite.

#Canucks' Hawryluk says he's not shy about chirping the other team: "We’re not out there to be friends."

“I’m just out there to compete with all I’ve got. Everyone’s out there for one reason, and that’s to win the game. And to win the game, that entails doing all the small things right, because you’re not going to score goals if you’re not winning the battles on the wall and you’re not getting to pucks first. I just pride myself in all those little details and working as hard as I can and leaving it all out there.”

Details? Oh, I think Travis Green’s going to like this guy.

Hawryluk’s next challenge will be to come into training camp ready to earn a spot in the opening night lineup. He requires waivers to be sent to Utica, but he’s also on a two-way contract, so nothing’s guaranteed.

“Obviously it wasn’t the right fit and the coach didn’t see me in the lineup consistently [in Florida]. It’s unfortunate and that’s the way it is. It’s part of the game. I’m looking forward to a fresh start to a team that sees potential in me and wants me.”