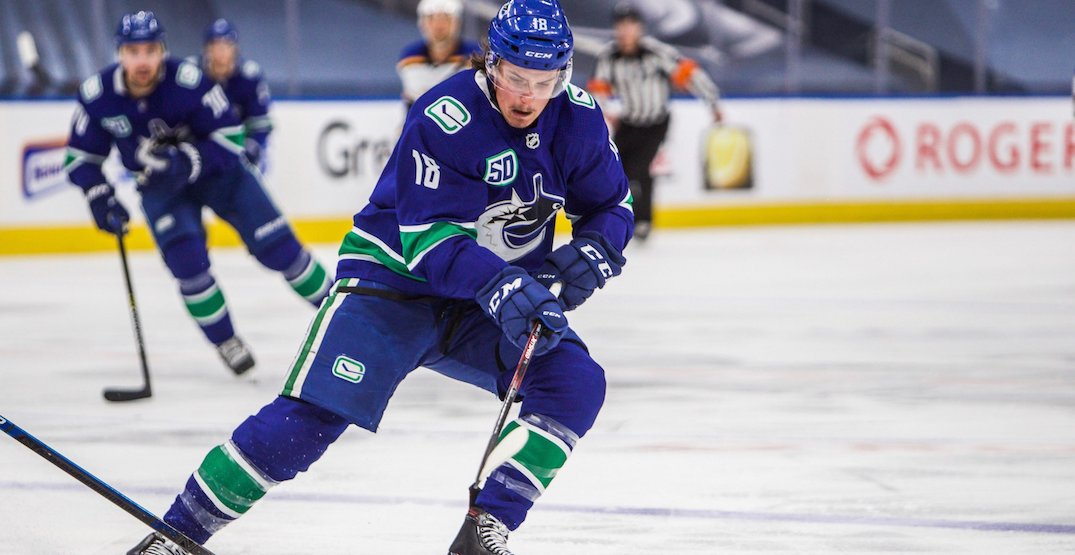 Following a surprise playoff run, this offseason promises to be one of the most intriguing in recent memory for the Vancouver Canucks.

It’s going to be a difficult task to bring everyone back next season, given Jacob Markstrom, Chris Tanev, and Tyler Toffoli are all pending unrestricted free agents. Add in restricted free agents like Jake Virtanen, Adam Gaudette, Tyler Motte, and Troy Stecher, and it appears that salary-saving moves are inevitable to fit a roster under the salary cap, which is remaining flat next season at $81.5 million.

Despite Thatcher Demko’s sensational playoff debut, Benning says he wants to bring Jacob Markstrom back in the fold next season. He surely wants Tanev and Toffoli back also, though there’s likely not enough money to go around.

“We have a lot of money to work with,” Benning said at the team’s end-of-season media availability. “We’re going to just have to decide what players that we want to sign here going forward. And other players maybe can move on and recover draft picks. That’s the circle of life in our business.”

The Canucks don’t have a first or second-round pick in next month’s draft because of the J.T. Miller and Toffoli deals, though Benning expressed an interest in recouping picks. That’s easier said than done of course, and has proved to be difficult in past years for the Canucks GM.

It will depend on who Benning is willing to move, which apparently may include some “young players.”

“We’re going to have to make some tough decisions maybe even on some young players to make sure we give ourselves the best chance next year to be competitive and to keep growing as a franchise.”

Speaking with Sportsnet 650, Benning revealed that he’s looking to shed salary in trades.

“Yeah, I am,” Benning confirmed to hosts Dan Riccio and Randip Janda. “I’ve already started talking to GMs on the weekend. I’ve had a couple calls this morning. I’m going to continue to touch base with all the GMs in the league and just try to figure out what the marketplace looks like, if we’re able to move money out, what it looks like. I’m going to be active in that market if we can be.”

Benning was emphatic that he wouldn’t trade first or second round picks in future drafts to shed salary, but brought up the idea of trading away restricted free agents on his roster.

“I’m not going to be giving up first and second round picks to lose money. We’ll have to figure out a different way. But we have to make decisions on maybe some of our RFA players and those are conversations that I’m going to have with coaches and our hockey ops group next week.”

Stecher’s future with the team could be in doubt, given the Richmond native is due at least $2.325 million, if not more in salary arbitration.

But an RFA that will surely become more expensive is Virtanen, who scored 18 goals during the regular season but wasn’t very productive in the postseason.

When asked about the Abbotsford product, Benning expressed disappointment in Virtanen’s recent play.

“I thought he worked and competed hard in the playoffs,” said Benning. “He scored that big goal for us in Game 6 (of the Vegas series). To be perfectly honest with you though, I was expecting more from Jake in the playoffs. He can skate, he’s strong. He can get to the net. He’s a guy that we’re going to talk about here moving forward.

“We’ve been patient with him in his development but he’s a guy that I was expecting to produce more for us. Those are the types of decisions that we’re going to have to make here going forward.”

Virtanen made $1.5 million this season and will have a case to make for a big raise in arbitration given his regular season stat line. But the sixth overall pick in the 2014 draft has never been a favourite of head coach Travis Green, who made Virtanen a healthy scratch at the start of the postseason.

Though he played the majority of the playoffs on the third or fourth line, Virtanen scored just three points (2-1-3) in 16 games, which ranked 10th among Canucks forwards — behind the likes of Brandon Sutter (6 points), Motte (5), and Antoine Roussel (4).  Virtanen wasn’t much of a physical presence either, being credited for just 36 hits, which ranked fifth among Vancouver forwards.

Now 24 years old, it may be time for the Canucks to move on from Virtanen. We should find out for sure in the next four weeks, as the NHL Draft is reportedly scheduled to begin October 6 and free agency is set to open on October 9.