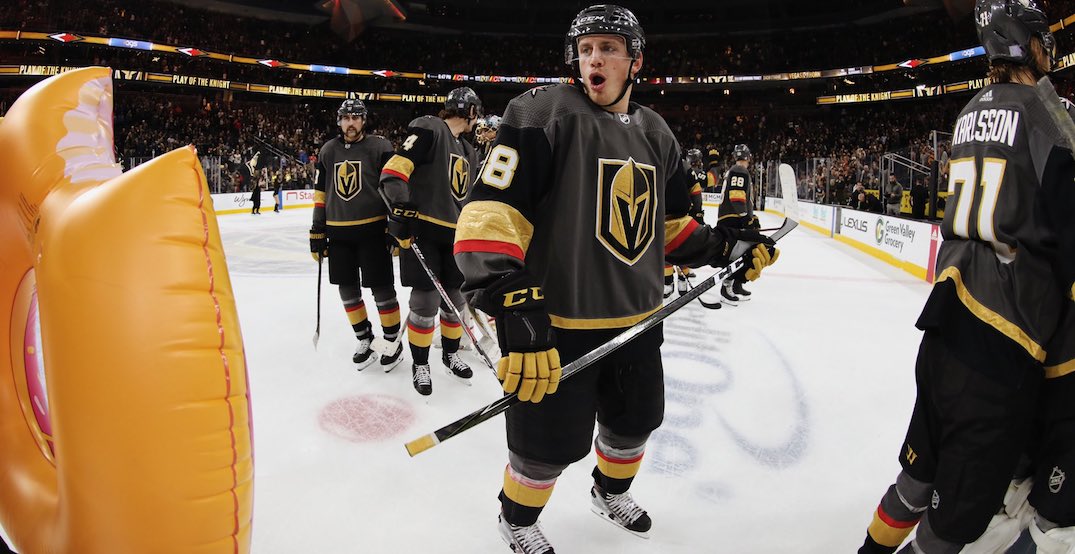 Dyson should look to sponsor Vancouver Canucks broadcasts next season, because if there’s one place where their moves always seem to look okay, it’s in a vacuum.

After the mass exodus of the Canucks’ free agents out of Vancouver, confidence from the fanbase in the team’s management group was seemingly at an all-time low. The announcement that the Canucks had pulled off a fantastic trade for Schmidt was enough to keep the team’s reputation from teetering on the precipice of disaster, but not enough to salvage the week.

This tension between the clear win the Canucks pulled off by getting Schmidt for the low price of a third-round pick and the clear loss of letting their free agents walk for nothing in return gave rise to an unprecedented level of the use of the term “in a vacuum.”

In a vacuum a 3rd for Schmidt is a steal. Canucks offseason still reads as weird though.

This Schmidt deal is the kind of "weaponizing the cap space" deal a lot of people have been hoping management would take advantage of in the past.

In a vacuum, this is an absolute win for the Canucks, they got a top 4 dman for a 3rd

– In a vacuum, Schmidt for a 3rd is a good trade (he's also a pretty likable guy)
– The contract probably looks iffy length-wise
– This is counter-intuitive to all the internal cap stuff we've been hearing
– The Canucks massively bailed out Vegas

So, we’ve established that the Schmidt trade looks great in a vacuum. What I am going to do is something that has never before been attempted in the history of hockey analysis. I’m going to determine how the deal looks not in a vacuum, but in the real, material world. This seems like a far more pertinent question, and the answer is: still pretty good, actually.

Schmidt has a sparkling underlying profile that indicates he is a high-end, play-driving top-pair defenceman. Over the past three seasons, the native of St. Cloud, Minnesota has been in the top 60 in shot attempt differential (CF%), unblocked shot attempt differential (FF%), and expected goals for percentage (xGF%) among defenders with at least 2,000 minutes of even-strength ice-time over that span.

In other words, since joining the Vegas Golden Knights in 2017, he’s played like a bonafide No. 2 defenceman, the role he’s likely been earmarked to play in Vancouver for the duration of his time here. He took a bit of a step back last season, but for most of his career he’s had a positive isolated impact on his team’s offence and defence according to HockeyViz.com.

One thing that sticks out about Schmidt’s profile is that he’s generally provided more value on the offensive side of the puck than the defensive side. On aggregate, he provides a lot of defensive value by keeping the puck at the other end of the ice, but in-zone defensive play isn’t exactly a strength, which makes him a less-than-perfect replacement for Tanev. The Canucks’ biggest issue this season was their defensive permissiveness, and Schmidt won’t necessarily be a huge help in that regard, even if he makes the defence stronger overall.

An area where Schmidt will help the Canucks is in transition. There has been a lot of hemming and hawing in this market about the team’s need to find another high-end puck-moving defender and they appear to have found such a player in Schmidt, even if swapping Troy Stecher and Tanev out for him creates holes in other areas.

During his time with Vegas, Schmidt has been far above average in terms of shot contributions, and has been among the league’s best defenders with regards to controlled zone entries and exits. 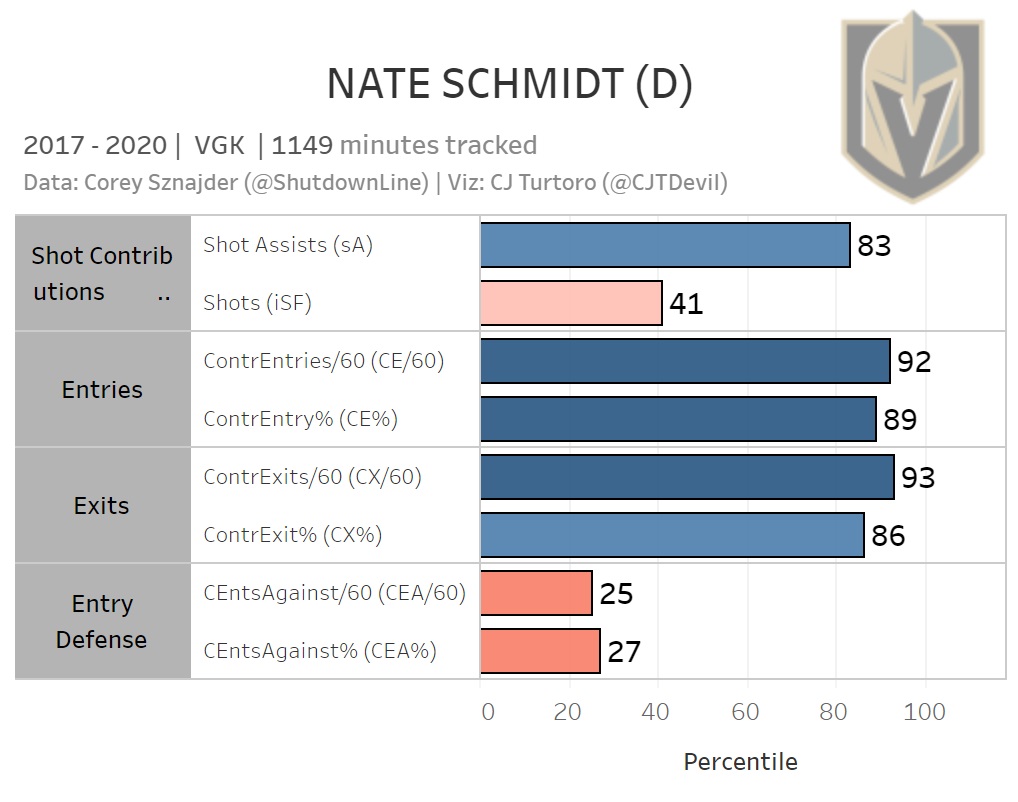 Schmidt can also play both sides, but is a natural lefty, which is an interesting wrinkle given Travis Green’s reticence towards playing defenders on their off-side. While the 6-foot-0, 194-pound defenceman certainly looks poised to be the Canucks’ top ride-side blueliner this season, don’t be surprised if the long-term plan is for him to replace Edler on the left side once more options on the right side become available in the future.

Schmidt’s contract has the potential to become a bit of a stumbling block later down the road for the Canucks, but the 29-year-old is a decent bet to provide value at least near his $5.95 million cap hit over the next five seasons. While perhaps a bit rich from a term perspective, Schmidt’s contract is also far from the most onerous on the Canucks’ books at the moment, but that’s an issue in and of itself. As the Canucks have accumulated more and more bad money, their margin for error has decreased significantly, and Schmidt’s deal is right on the line.

The chance to acquire a defenceman of Schmidt’s caliber for a third-round pick doesn’t come around very often, and there’s no question that the trade is a huge win for Vancouver from a value perspective. In fact, it may be the best trade of Jim Benning’s career.

What it is not, however, is a refutation of the criticism he received over the past week for going 0-for-4 on his attempts to re-sign his team’s free agents. In spite of how good Schmidt is, acquiring his services probably still isn’t enough to say the Canucks have broken even on their offseason so far. The trade also appears to have been the result of opportunism rather than careful planning. Even if losing out on Markstrom, Tanev, Stecher, and Toffoli and bringing in Schmidt and Holtby was the plan all along, that’s a questionable plan to begin with.

In a vacuum, Schmidt is a better defender than either of Tanev and Stecher. Outside the vacuum, I’m not sure he quite matches their total value, especially if the Canucks end up having to look to their farm system to fill the final spot on the right side.

This may all seem like nitpicking, but at this stage in their development, it’s important to consider how individual moves factor into the larger picture. Fans and the media can be myopic at times when looking at individual trades and signings, placing emphasis on whether or not a team has “won” a deal rather than whether or not the deal fits into a coherent plan. In Schmidt’s case, it’s obvious the Canucks added a great player, but it’s unclear if the sum total of their offseason moves has made them a better team. The point isn’t just to win trades, it’s also to win games.

Over the past year, the Canucks have greatly improved their trade record while also showing a remarkable uptick in the quality of players they’ve targeted, paying a fair price for Miller and Toffoli, and now acquiring a top-four defenceman for significantly under market value. When you look at the pieces that have moved out over the same time frame, however, it’s clear that the attempts to clear a path towards Stanley Cup contention are still a work in progress.