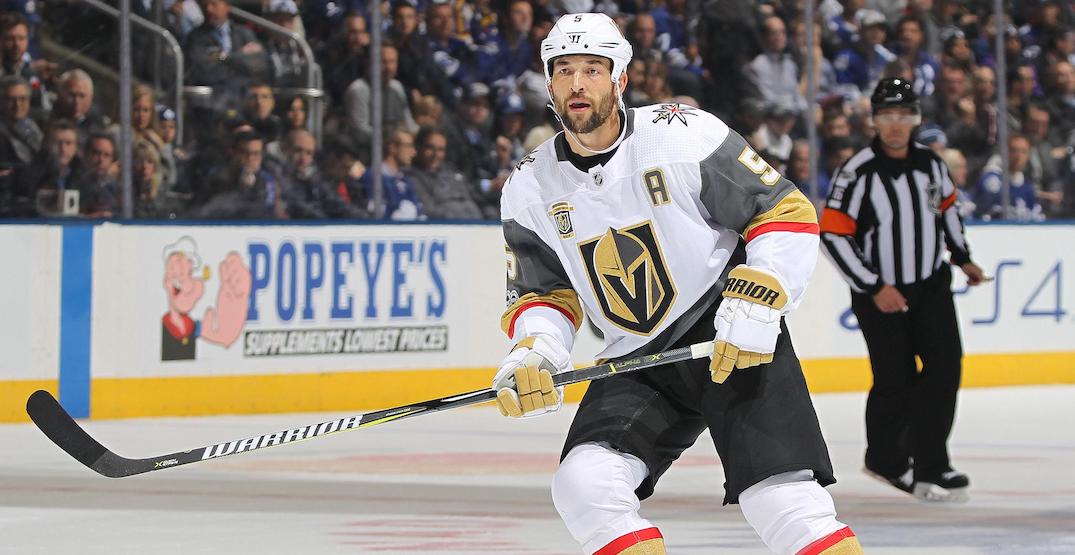 It’s been a busy offseason for the Vancouver Canucks already.

Some longtime Canucks are gone, as Jacob Markstrom and Chris Tanev left for Calgary in free agency, while Troy Stecher signed with Detroit. Meanwhile, first-line winger Tyler Toffoli has landed in Montreal.

It hasn’t been a total loss though, as Braden Holtby will share the Canucks crease with Thatcher Demko, and defenceman Nate Schmidt was acquired in a steal of a trade from the Vegas Golden Knights.

There’s still business to be done though.

The Canucks have 21 contracts on the books, meaning they need to add at least two more players, with only $1.998 million in cap space according to CapFriendly.com. That’s not going to be enough money to re-sign their two remaining restricted free agents, Jake Virtanen and Adam Gaudette, so another move will need to be made.

Some money could be freed up by burying a player like Loui Eriksson or Sven Baertschi in the minors, though that would make only a very minor impact. Teams can save a maximum of $1.075 million off their cap when they send a player to the AHL, but to fill that roster spot, they have to spend at least $700,000, which his the NHL’s current minimum salary.

So if the Canucks sent Loui Eriksson to the minors and replaced him with a player on a league-minimum salary, they’d save only $375,000.

Instead, expect a trade of some sort, to free up money. Perhaps that’ll be in the form of Virtanen, who is in line for a raise and has an arbitration date set for October 28, or Jordie Benn, who is in the last year of a $2 million contract. The team could also move on from someone like Brandon Sutter, who carries a $4.375 million cap hit for one more season, but they’d likely have to part with a draft pick or retain salary, or both, in order to get that done.

In any case, the Canucks appear to be in need of a defenceman. They have five blueliners locked into spots on the team next season, in Quinn Hughes, Alex Edler, Tyler Myers, Benn, and Schmidt.

They do have some young defencemen that could warrant a promotion to the NHL next season, notably Olli Juolevi, Brogan Rafferty, and Jake Rathbone.

But to count on two of those three defencemen to fill spots on the opening night roster would be risky. What would make the most sense is for the Canucks to add at least one more defenceman with NHL experience, on an affordable contract.

The biggest names still out there are Zdeno Chara, Travis Hamonic, and Sami Vatanen, but unless the Canucks can clear out significant space for them, that’s not likely a fit. The second tier of rearguards includes the likes of Ron Hainsey, Cody Ceci, Dmitry Kkulikov, Andy Greene, and Ben Hutton, although all of those players have faults, and may not come cheap enough anyway.

So let’s look deeper into the free agent crop, all the way into the bargain bin.

Jan Rutta wouldn’t exactly qualify as a sexy offseason addition, but the Czech defenceman does have size and experience. He’s been used sparingly on a deep Tampa Lightning team the last two seasons, and missed a lot of time due to injury in the postseason, but the right-shot blueliner was trusted to appear in four games during the Stanley Cup Final.

During the regular season, Rutta had the third-best Corsi-for percentage (53.17%) of all Lightning defencemen, behind only Kevin Shattenkirk and Victor Hedman.

If size, toughness, and leadership is what you’re after, Deryk Engelland checks all the boxes. The only question about the 38-year-old is how much gas is left in the tank.

Engelland fell out of favour with new head coach Peter DeBoer last season, not getting into a single postseason game for the Golden Knights, despite the fact the team was short on right-shot defencemen. He’s been offered a front office job by the team, but hasn’t decided if he’s going to retire yet. Maybe there’s one more season in him.

Slater Koekkoek would represent a younger option on defence, after the Chicago Blackhawks chose not to qualify him as a restricted free agent. The 10th overall pick at the 2012 NHL Draft, clearly Koekkoek hasn’t lived up to expectations in his career.

A left-shot defenceman, he did play a regular shift on a Blackhawks team that won a play-in series against the Edmonton Oilers, playing in all nine postseason games for Chicago.

Looking at his underlying numbers, Koekkoek could be a bit of a diamond in the rough, as he produced a team-high 51.86 Corsi-for percentage, albeit in only 42 games.

Michael Stone has never been able to replicate his 36-point season, a career high, which he accomplished with the Arizona Coyotes in 2015-16. Perhaps a change of scenery would do the right-shot defender good, because it’s been a less-than-stellar four years with the Flames.

What do they say about the devil you know?

In many ways, Oscar Fantenberg delivered everything the Canucks asked for last season. After waiting until December to make his debut, he quickly supplanted Jordie Benn for the job as sixth defenceman, with a style that was low on flash and high on grit.

If that puts Fantenberg in line for a raise, perhaps he’s priced out of Vancouver. But with a flat cap and every team losing money due to the pandemic, he may have to settle for a league-minimum salary. If so, why not Vancouver?