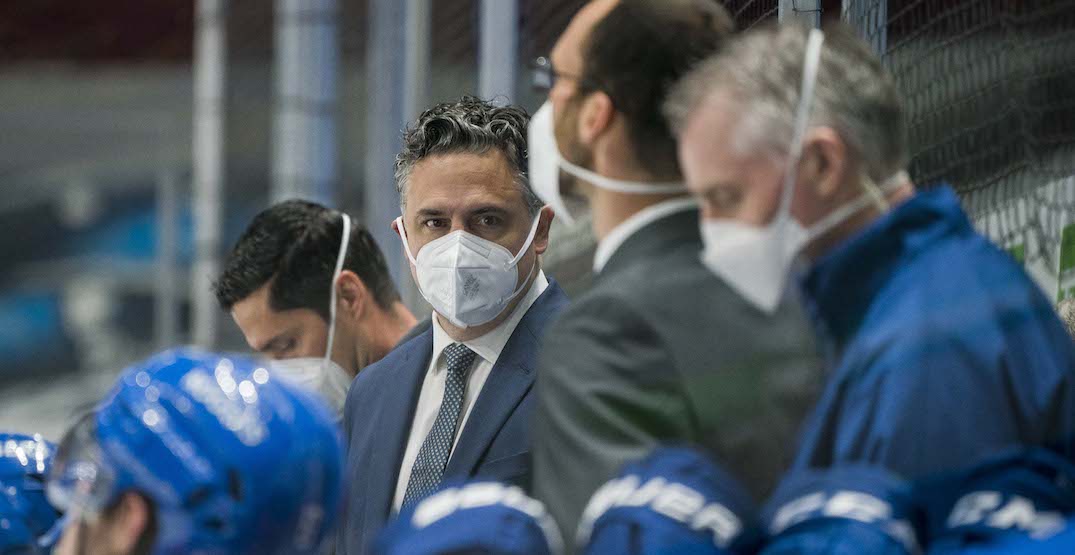 Most of the speculation this season regarding the future of Canucks coaches involved head coach Travis Green, and goaltending coach Ian Clark.

That was for good reason, as both Green and Clark are well regarded around the NHL, and both were in the final year of their respective contracts.

The Canucks finally signed Green to a contract extension last month, and GM Jim Benning calmed the masses last week with how confidently he spoke about re-signing Clark in an interview with Don Taylor and Rick Dhaliwal on CHEK.

The Canucks haven’t announced extensions for any of their assistant coaches, however, and that is leading to more speculation.

“I’m having a conversation with Travis and we’re going to go through the [coaching] staff… and make decisions on these guys,” Benning said on CHEK last week regarding the team’s assistant coaches.

Manny Malhotra left the Canucks last offseason for a bigger role with the Toronto Maple Leafs coaching staff. The Canucks replaced him with Jason King, an in-house promotion from the Utica Comets that may have been about cost-saving during a pandemic.

Dhaliwal is reporting today that Kirk Muller may be someone the Canucks would consider adding to Green’s staff, which raises some more questions.

The #Canucks appear to be looking at adding a member to their coaching staff and Kirk Muller is potentially a name to watch.@DhaliwalSports had some info..https://t.co/h4e2SKLzpb pic.twitter.com/jIvrlSO43S

If the Canucks add Muller, a 55-year-old ex-star player with an extensive coaching resume, it would be hard to imagine that he would simply takes ove King’s spot in the press box as the third assistant.

Muller, who was let go by the Montreal Canadiens when the team fired Claude Julien in February, has 12 years of experience as an NHL assistant, and had a 80-80-27 record in three seasons as head coach of the Carolina Hurricanes. If that’s a coach the Canucks hire, you’d have to think he would take a spot on the bench as Green’s right-hand man.

Those spots are currently held by Nolan Baumgartner, who handles the defencemen, and Newell Brown, who is in charge of the forwards. Muller played 1349 games as a centre in the NHL, scoring 959 points, and would be the natural choice to take over the forwards.

Muller was in charge of the power play in Montreal, which wasn’t an area of strength for the Habs during his last 4+ years there.

Brown is most well known for being a power play guru, though the results have been mixed since he rejoined the Canucks in 2017. The Canucks’ power play ranking dropped to 25th last season, down from being ranked fourth in 2019-20. Vancouver was ninth on the man advantage in 2017-18, but 22nd in 2018-19.

Muller mixed well with 21-year-old Habs centre Nick Suzuki, I’m told. Suzuki has quickly developed into a reliable two-way centre in two seasons with the Habs, so perhaps Muller would be a good fit with Vancouver’s young players.

Whether Muller finds his way to Vancouver or not, the Canucks have a number of areas for improvement. Without Elias Pettersson for much of the season, the team ranked 24th in goals-for (2.64) and gave up the sixth-most goals against (3.34), despite stellar play from Thatcher Demko.

Vancouver was particularly leaky defensively early on in the season though, before injuries took hold, with Green later admitting to needing to make in-season tweaks to his system.

“We’ve subtly been changing a couple things here and there, from game-to-game, a couple things in our neutral zone play,” Green said in February. “We’ve talked about making a few, bigger changes, but… you need some practice time for some of those things.”

Perhaps changing the mix on the bench will improve results on the ice. Stay tuned.