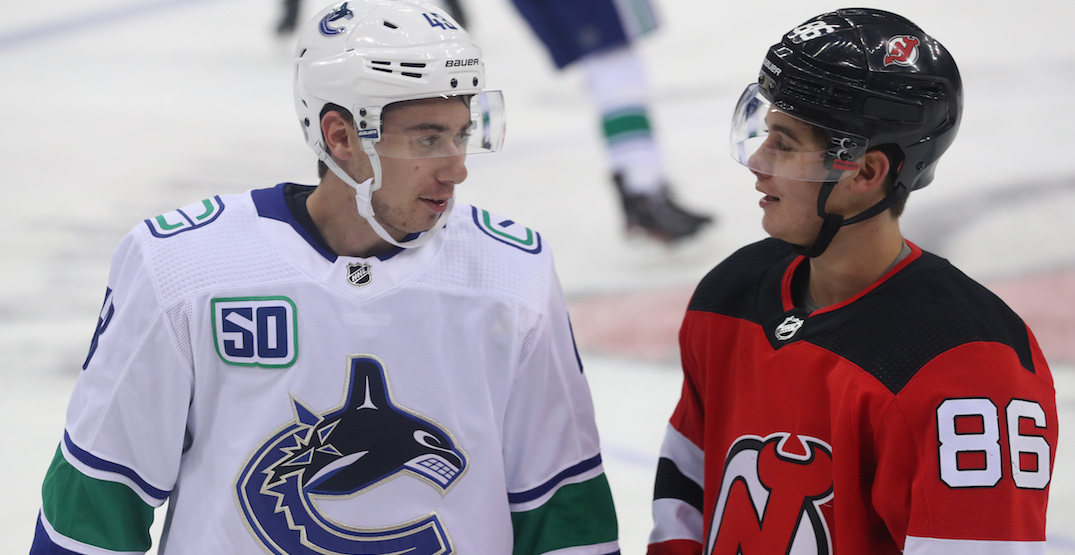 Move over Staal brothers, the next great brother trio is set to arrive in the NHL.

Luke Hughes, the brother of Vancouver Canucks defenceman Quinn Hughes and New Jersey Devils centre Jack Hughes, is expected to be a top 10 pick in the draft next month.

And it just so happens that both his brothers’ teams have top 10 picks — the Devils will pick fourth, while the Canucks pick ninth.

A 6-foot-2 left-shot defenceman, Luke is the bigger younger Hughes brother. Luke scored 15 points in 18 USHL games last season and tallied 34 points in 38 games with the US National U18 Team.

While NHL teams don’t always choose players based purely on bloodlines, Hughes does seem like the type of player the Canucks or Devils need given they’re each already set for years to come with a pair of excellent young centres in the fold.

Hughes is one of the youngest players available in the draft, which should increase his value, as he doesn’t turn 18 until September. He’s committed to the University of Michigan next season.

“While Hughes’ ability one-on-one is advanced, and his puck handling blends well with his speed, he struggles to incorporate teammates at times, and the translatability of these offensive drives are also a question mark at higher level hockey,” Gee adds. “While exerting sustained offensive pressure, Hughes possesses some manipulation off the point, and will need to continue to work on his upper-body centric shot.

“Hughes is a fairly aggressive defender transitionally, who flexes his lateral ability to suffocate entering attackers. While this aggressiveness can backfire, his skating allowed him to recover in many of these scenarios. He has some issues with strength and can be bullied around the slot, but that shouldn’t be much of an issue after further physical development.”

Hughes is ranked fourth among North American skaters by NHL Central Scouting, but this promises to be the most unpredictable draft ever due to the pandemic. Most leagues around the world either had significantly-shortened schedules or cancelled seasons, and many scouts were unable to travel to a lot of games for in-person viewings.

Prospect rankings are all over the map. Elite Prospects has Hughes ranked 11th, while FC Hockey has him ranked first — though other rankings have him listed somewhere in between those two extremes. It’s fair to assume team lists also carry more variance than usual this year.

A pair of notable mock drafts, from Sam Cosentino (Sportsnet) and Corey Pronman (The Athletic) have Hughes going fourth to New Jersey. While that seems like a smart bet, we have been surprised at the draft before. Remember when two Finnish players were ranked second and third in 2016, and the NHL’s only GM from Finland (Columbus GM Jarmo Kekalainen) held the third pick, but instead chose Canadian centre Pierre-Luc Dubois?

That turned out to be a wise choice by the Blue Jackets, and if the Devils are smart, they’ll take the best player regardless of family ties.

Quinn Hughes was never supposed to fall to the Canucks in 2018, but Vancouver snagged him with the seventh overall pick.

If the Devils pass on Luke Hughes, he could fall too. Craig Button (TSN) has Hughes going eighth to Los Angeles, one pick ahead of the Canucks, in his mock draft.

It remains to be seen how high the Canucks are on Quinn’s younger brother, but if he slips to their pick it’s hard to imagine Jim Benning passing on him. The biggest area of need for the Canucks is defence, and there are projected to be only four blueliners picked in the top 10 this year: Owen Power, Simon Edvinsson, Brandt Clarke, and Hughes.

There’s zero chance that Power slips to the Canucks’ pick, and maybe none of the other three do either. We’ll find out for sure on draft day on July 23.