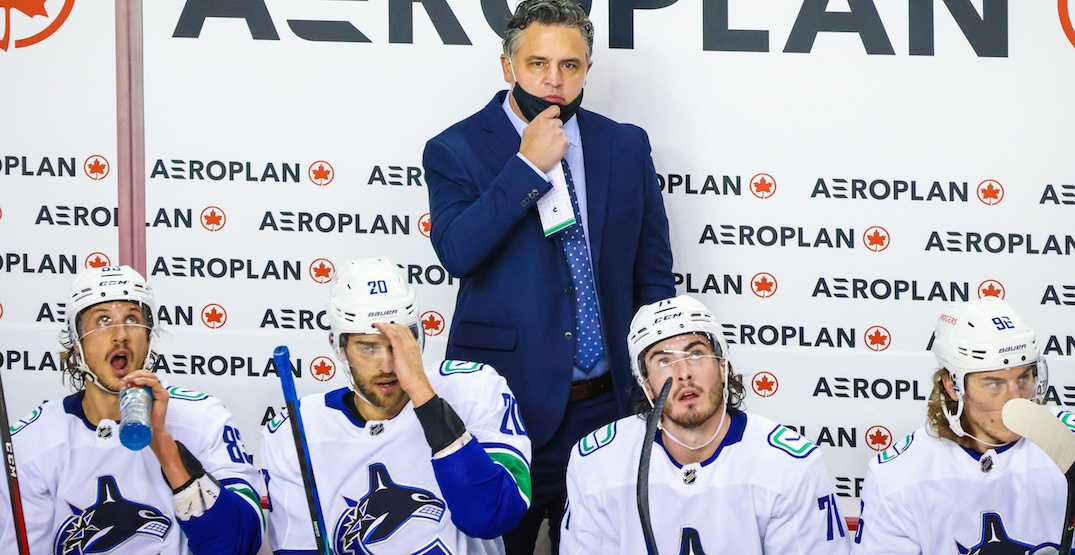 This is not a blip, it’s no longer a slump, and it’s not “still early” anymore.

The Vancouver Canucks are a bad defensive team, and if they want to turn things around, they’re going to have to make some changes.

That’s a harsh reality the team needs to face, after a feel-good season that saw the Canucks return to the playoffs for the first time in five years and nearly make it to the Western Conference Final.

The Canucks are finally paying the penalty for years of salary cap mismanagement. I won’t bore you with the lengthy list of regrettable contracts — you likely know them all by now — but the result was a talent-drain out of the organization.

Let’s dive into it, with some Snapshots.

Canucks are one of the NHL's leakiest defensive units this season pic.twitter.com/2zS5tafNbQ

If it weren’t for three games against the league-worst Ottawa Senators, it would be even uglier.

In the 11 games they’ve played against teams not from Ottawa, the Canucks have given up over five goals eight times.

The Canucks have played 14 games, which means they have completed 25% of their 56-game schedule already.

Those 14 games played lead the league, as for some reason Vancouver has played at least two games more than any other team. In the North Division, they’ve played three to four games more than every team other than Edmonton.

Fatigue could be an issue, and Travis Green referenced that after Thursday’s loss.

“I thought we looked like a very tired team tonight, playing against a fast, skilled team,” said Green. “We were a day late, second behind, everywhere on the ice.”

Playing more games than every other team also means the Canucks have had fewer chances to practice than anyone else. They look like a team in desperate need of practice right now, that’s for sure.

Is the system to blame?

Blaming “the system” after poor defensive outings is usually an uninformed take, because of the subtleties of systems that are near-impossible to pinpoint by fans and media without inside knowledge.

Coaches and players are generally loathed to speak about the details of their system, though Green did acknowledge he has made some tweaks to it already.

“We’ve subtly been changing a couple things here and there, from game to game, a couple things in our neutral zone play,” said Green. “We’ve talked about making a few, bigger changes, but… you need some practice time for some of those things.”

Can Canucks’ best players get them out of this?

But defensively, most of these players haven’t been as good as we’re used to.

As TSN 1040’s Jeff Paterson points out, Hughes has been on the ice for more goals against at even strength this season than anyone else in the league — six more than Boeser, who is second.

When paired with Chris Tanev last season, Hughes was used in a matchup role against the other teams’ top lines at times, so this is a major development.

Hughes doesn’t have Tanev anymore of course, and Travis Hamonic didn’t provide much stability before he was injured. Jordie Benn is filling in as Hughes’ partner now, and while they had some initial success together, that’s still a massive downgrade from Tanev.

I believe these players are better than they’ve shown this season, and should snap out of it.

Who do you trust?

Which defence pairing do you trust the most to defend?

What I would do next game

Say what you want about Eriksson, but the Canucks could use some boring stability right now. So why not put him in for his first NHL game of the season?

Jake Virtanen and Adam Gaudette have offensive upside, so why not put them in a position to succeed while trying to spread the offence onto three lines, rather than just two?

And on defence, it’s time to load up two pairings and ride them at five-on-five. Hughes needs a stable partner, so put him with Nate Schmidt, who has probably been Vancouver’s most reliable defender this season.

Alex Edler and Tyler Myers have had success together before, put them together.

Then spot in Benn and Olli Juolevi, who deserves another look.

I think it’s worth a shot:

Use Horvat’s line in a hard matchup against Auston Matthews’ line, and see if Gaudette and Virtanen can flourish with Miller against Toronto’s third and fourth lines.

Ice T has a question

Serious Question: Why is Hockey the only sport that they let the players fight? Don’t say tradition.. https://t.co/C60I0bGaUS

Benning on the hot seat

Heads will roll if the Canucks continue like this — whether that be in-season or more likely after the season.

Green was Teflon prior to this season, so giving him the axe seems premature.

The biggest problem with this team is its salary cap situation, and given that Jim Benning has been in charge for nearly seven years, I would suggest if anyone pays the price for missing the playoffs, it will be him.

You shouldn’t get to try three different coaches if you’ve missed the playoffs five times in seven years. At some point, it’s time to look in the mirror.

Even Gord Miller is backtracking

Is a trade coming?

Trades are hard to complete during normal times, but you have to wonder when Benning decides to pull the trigger on a deal.

They need a defenceman, but they also need a reliable third-line centre. Virtanen and Gaudette seem like obvious trade chips to me, especially with Vasily Podkolzin on the way — perhaps before the end of this season.