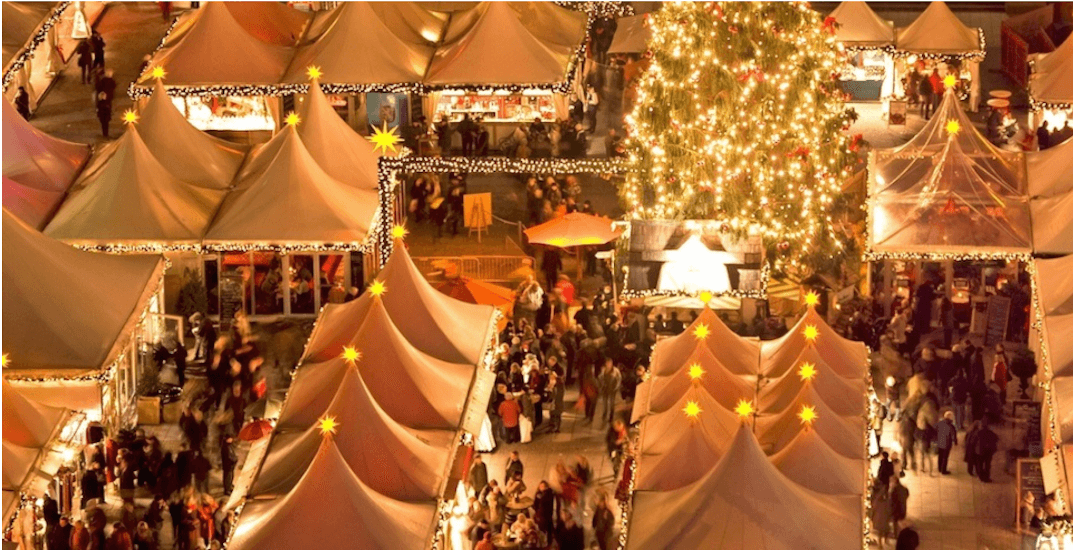 Courtesy of Holiday Fair in the Square

There’s no denying that December is always one of the most expensive months of the year.

To ensure you can still get out and have some fun this month (without breaking the bank), we’ve put together this free events guide that’s filled with a variety of fun and festive events happening almost every night of the month.

What: This free concert series takes place in one of Toronto’s most breathtaking and intimate spaces. The series will feature artists from around the world as they share their talent and passion in six series: vocal, piano, jazz, dance, chamber and world music.

When: Concerts take place most Tuesdays and Thursdays at noon, and some Wednesdays at noon or 5:30 pm. Check event website for full details.
Where: Richard Bradshaw Amphitheatre, 145 Queen Street West

When: Now until December 19
Where: Surf the Grates, 276 Carlaw Avenue

When: November 25 to December 31
Where: Wellington Park, 50 Bonnie Drive, Simco

When: Now until spring
Where: Harbourfront Centre, 235 Queens Quay West

What: Street Curling is coming to the Winter Village at Evergreen Brick Works this winter and it’ll be FREE to play! The synthetic ice sheet will be open every day of the Winter Village from 10 am to 5 pm. It’s available on a first-come basis and will be located under the covered pavilions alongside other activities including ball hockey, bocce ball, an indoor board game lounge, and a rotating line-up of food trucks

When: December 1, 7 pm until mid-February
Where: At the foot of Leuty Avenue, The Beach, Toronto

CBC Toronto’s Sounds of the Season

What: Enjoy this annual charity drive to help support local food banks. Admission is free, but if you can, please bring a cash or food donation. See live radio and television broadcasts of CBC shows including Metro Morning, Here and Now and CBC Toronto News.

What: The Liberty Village BIA invites you to the first annual holiday bash on December 5.  Make sure to wear your ugliest holiday sweaters, as there will be prizes for the craziest holiday getup.

What: Calling all movie buffs! Join Tafelmusik and the Tales of Two Cities creative team for the launch of Tafelmusik Media’s newest DVD/CD, featuring a FREE screening of the performance that was filmed before a live audience at the Aga Khan Museum last December.

What: Come and enjoy paper crafts and festive treats, as you catch up on your holiday correspondence and mail your letters to Santa.

What: Come and enjoy a showcase of the best LGBT themed short films from around the world today. There will be films from Canada, the US, UK, and South Africa presented. These are simply the best short films made in the last year.

What: The Jewish holiday kicks off the at The Drake Hotel with this complimentary Hanukkah Feast courtesy of Bespoke Butchers, Lox & Schmear, Mad Maple + Rosen’s Cinnamon Buns. Look forward to chopped liver, latkes, lox, and rugelach.

What: If you’re looking to give more one-of-a-kind gifts this holiday season, you’ll find them at the 4th annual Etsy Christmas Market. Hosted by the Toronto Etsy street team, this festive marketplace will feature awesome handmade, vintage, and delicious wares all made by the team members.

What: Come and enjoy a fun evening of games, crafts, and activities, followed by a story, music, and even a delicious turkey dinner!

What: Nathan Phillips Square is hosting a massive New Year’s Eve celebration to ring in 2018. The final send-off to the year-long celebration of Canada’s 150th birthday will kick off at 8 pm at Toronto’s City Hall and will include an exhilarating evening of entertainment with dynamic DJ’s, live electronic music, site animations, a DJ skating party sponsored by Tim Horton’s and a stunning fireworks display at midnight.