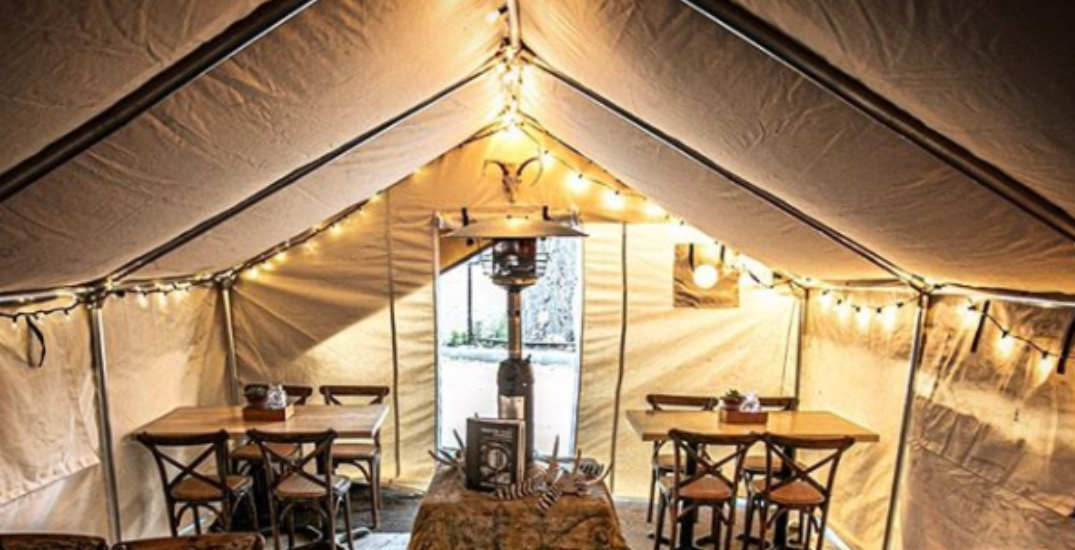 Antler Kitchen and Bar has opened a hunt camp-themed patio behind their Dundas West restaurant.

Called the Antler Hunt Camp, the covered and heated patio is an extension of the restaurant known for using foraged ingredients and game meats to celebrate the “wild culinary delights of Canada.”

Meant to resemble an authentic hunt camp, the 16-person patio is decked out in camo, string lights, and hunting décor, including animal skulls. Two sides of the tented structure are open per legal requirements, the restaurant said on social media.

Antler was previously the site of multiple animal rights protests and became a worldwide sensation after Chef Michael Hunter butchered and ate a leg of deer in front of activists.

So far though, social media responses to the patio have been positive, with potential patrons saying the concept looks “cozy” and “epic.”

Antler Hunt Camp is one of the many creative ways Toronto restaurants are responding to the hardships of the pandemic, including bubbles, pods, and yurts.

It’s currently up in the air when indoor dining will resume in Toronto.

While the city was slated to reduce some restrictions on November 14, Premier Doug Ford announced on Monday that Toronto would instead be moving into the red zone of his government’s new COVID-19 response framework.

Under the “Control” level, indoor dining of up to 10 people would still be allowed. However, Toronto’s Medical Officer of Health Dr. Eileen de Villa can add or change guidelines at her discretion and is expected to announce new restrictions for the city on Tuesday.