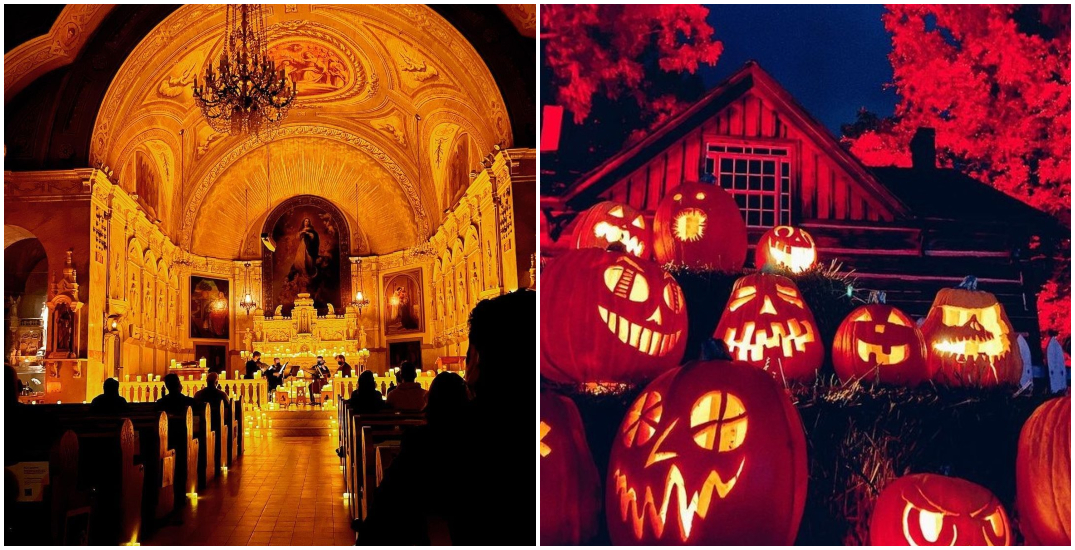 Halloween isn’t typically associated with the dating scene, but there are a lot of fun things going on across Montreal that might be more fun to tackle with your significant other.

Besides cozying up on the couch and watching a scary movie, why not take your lover by the hand and cruise through a pumpkin patch?

Here are a bunch of great date ideas to get you and yours into the Halloween spirit.

Be sure to check out our romantic restaurants, too, in case you’re hungry afterwards.

How about you and yours attend the largest Rocky Horror Picture Show event in North America on Halloween?

A screening of the 1975 film takes place at The Dollar Cinema on October 31, where guests are encouraged to dress up, yell, sing, dance, and throw special props around the room.

The film follows two young lovers, Brad and Janet, who set out to visit their old teacher. On the way there, their car breaks down, and they’re forced to walk up the road to a creepy castle to find a phone. Instead of finding a phone, they find a mad scientist, a.k.a a “sweet transvestite from Transylvania,” who has chosen to bring his own creation to life.

Get dressed up and have a night.

Illumi in Laval is showcasing a Halloween light show that guests can either check out on foot or in their car.

There are over 25 million LED lights and fixtures erected in different Halloween themes, including ghouls, monsters, and witches.

It’s going to be eerily romantic.

A post shared by Candlelight Concerts by Fever (@candlelight.concerts)

How much more romantic can you get than candlelight concerts?

Get ready to shive during a series of concerts at the breathtaking Chapelle Notre-Dame-de-Bon-Secours.

From timeless classics to horror themes from movies, emotions will come to life offering guaranteed goosebumps featuring concert renditions of Michael Jackson’s “Thriller,” Danny Elfman’s “This Is Halloween” from The Nightmare Before Christmas, the theme from Psycho, and much more.

How about marvel at tens of thousands of pumpkins?

Because Pumpkinferno showcases over 7,000 handcrafted pumpkins lit up at night along a one-kilometre path against a 19th-century backdrop. Some are individual pumpkins, and some are fused together to make some outstanding and pretty impressive art pieces.

Phot worthy, for sure.

If you’re looking for thrills and frills on a date, look no further than La Ronde’s spooktacular Halloween events calendar.

After you’re done screaming for your life on Le Ednor, get chased around the park by ghouls and monsters.

At least you’ll have each other, right?

If you and yours want to fill up the car with pumpkins this month, this farm outside of Montreal might be tough to top.

Laval’s Ferme Marineau, a pumpkin patch that has been in operation since 1927, has over 50,000 pumpkins that are ripe for the picking.

The farm even gives guests a wheelbarrow in order to capture and transport as many pumpkins as you can.

The farm has an impressive selection of fall-based activities on-site, including pumpkin tic-tac-toe, pumpkin bowling (which is exactly what it sounds like), a giant pumpkin house, corn maze, a petting zoo, tractor rides, and of course, food and drink.

When: Weekends from now until the end of October
Time: 9 am – 6 pm
Where: 4356 Boulevard Dagenais Ouest, Laval
Price: $4