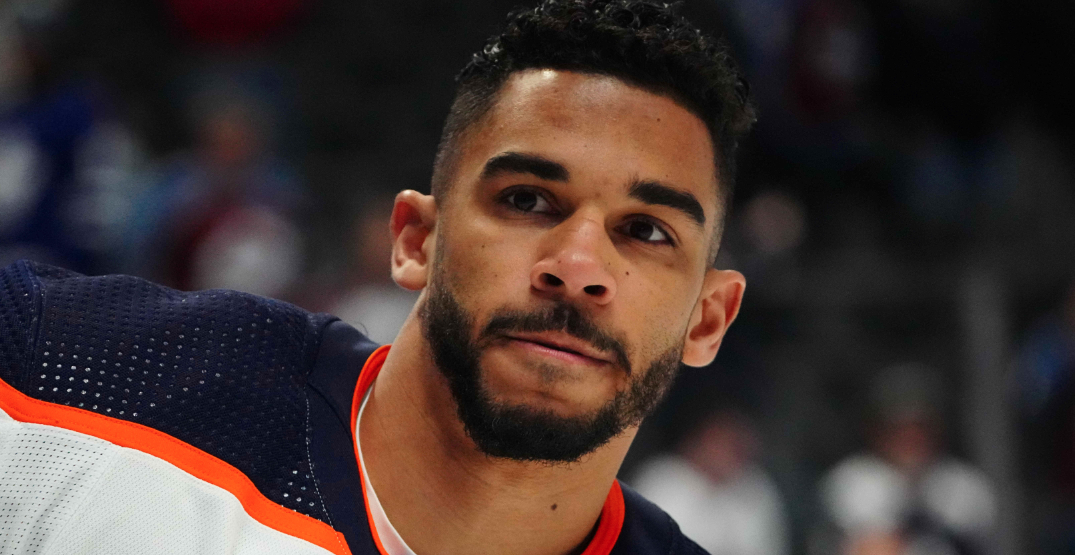 The Edmonton Oilers are interested in bringing Evander Kane back.

But whether they can bring him back is the multi-million-dollar query.

And Oilers general manager Ken Holland will go searching for the answer shortly.

“Obviously he’s an unrestricted free agent,” Holland said in his final address to media on Wednesday. “Am I interested in bringing him back? Yes. I think he had a big impact on our team, not only his ability to play goals but he plays with an edge. I thought there was wonderful chemistry between him and Connor (McDavid).

“Can I keep him?” Holland questioned. “His cap number is $2 million. I don’t expect him to play for a $2 million cap number next year. I don’t know what it is. I’d have to sit and talk to his agent, Dan Milstein. I’ve got decisions to make and have got to go through a process.”

It’d seem like a no-brainer to bring back a player that produced 22 goals and 39 points in 43 games in the regular season before upping the ante to the tune of 13 strikes in 15 games in the Stanley Cup Playoffs.

Kane was signed a one-year pact as an unrestricted free agent in January after having the balance of his previous seven-year, $49 million contract terminated by the San Jose Sharks after a run of off-ice issues.

The issue lies in whether or not the Oilers can afford Kane. His one-year deal, valued at just over $2.1 million, comes off the books.

It’ll line up a raise for Kane, and Edmonton is projected to have just over $7 million in cap space available with five forwards, two defencemen, and one goalie hitting unrestricted free agency this offseason.

Something he’ll undoubtedly weigh in a potential return.

“I think moving forward, obviously, there’s a lot of things that factor into a decision,” Kane said in his exit interview Tuesday. ” I’ve been very happy with my time here. The fans have been phenomenal. The people in the city have been phenomenal. This has got to be the best organization I’ve played for. No complaints. Just like everybody else, I’m sure, is looking forward to what happens.”

Kane, though, was non-committal when it came to declaring whether he wanted to return.

“There’s so many different variables,” Kane added. “We just finished the season [Monday]. There’s lots to sort through and figure out before I start thinking about that.

“I’ll go back to when I was in a similar but very different situation a few months ago where I had the opportunity to kind of pick where I wanted to go. Edmonton was interested in me and I was interested in them. The way I look at it… you’ve got two of the best players in the world. You’ve got a team that wants to win now and is primed to win now. I think me joining it had a great opportunity to win. I’m happy to say that we had some success doing that.

“I’m sure me and Kenny will talk a little bit about it, yeah.”

Holland and Kane will connect, for sure. Very soon.

And Holland will see if the sniper has interest in returning, or if he’ll have to look elsewhere to replace a player that projects to a 42-goal pace over an 82-game season at a minimal cap charge.

“Next week I’ll call the agents for some of these players.”