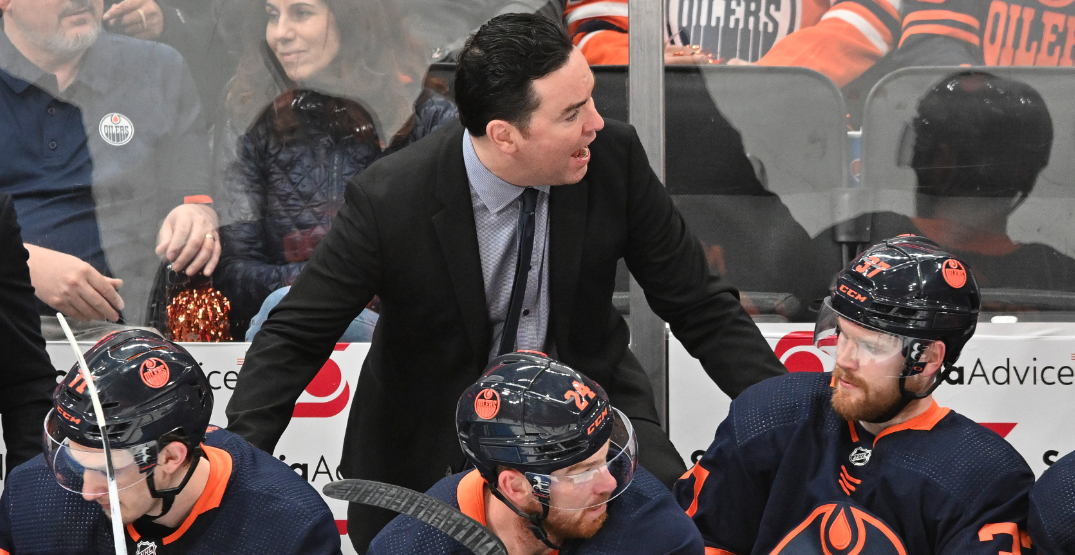 The Edmonton Oilers aren’t looking for another change behind the bench after watching Jay Woodcroft turn around their season in dramatic fashion.

Oilers general manager Ken Holland is hoping to have his coach back.

“I think Woody did a fabulous job,” Holland said.

“The team responded to him and I told him he and I would meet early next week, Monday or Tuesday and have a discussion. Would I like him back? Yes, I am interested in him coming back. I want to hear what he’s thinking. But I think he did a great job and was a big part of what we accomplished.”

“I’ve worked here for seven years,” Woodcroft said. “Proud member of this organization. This is my third different job title. I enjoyed it. I’ve enjoyed my time here. I don’t have any update on it. Ken and I are getting through our player meetings right now, and I’m sure we’ll sit down early next week and work through it.”

Woodcroft inherited an Oilers team that fell six points out of a spot in the Stanley Cup Playoffs.

“I felt that when I made the decision that we just needed a change just to try to jolt our team into getting back and getting going,” Holland said. “Jay did that. He came in and he took charge, made some tweaks, had an attention to detail, maybe moved some things around. And the players really responded. We started to get our confidence back.

“I think with Jay’s leadership, and getting our swagger back and our confidence back, that we got back up and running.”

After elevating the Oilers to second in the Pacific Division, Woodcroft helped guide Edmonton to a seven-game opening series win in the Stanley Cup Playoffs against the Los Angeles Kings. His team trailed 3-2 in the series before winning back-to-back do-or-die games to stay alive. The Oilers then dispatched of the Flames in the Battle of Alberta in the second round.

Ultimately, Edmonton was swept in the Western Conference Final against the Colorado Avalanche.

“I think it’s the job of the head coach to define what’s most important, to provide a sense of true north,” Woodcroft said. “That’s what I tried to do. A sense of hope at that time when the team was out of the playoff picture. Tried to present hope and a spirit of optimism.”

It’s fair to say he did.

The regular-season result was the Oilers’ seventh-best finish in franchise history. The postseason result had Edmonton advance beyond the first round of the playoffs for just the second time since 2006, and a trip to the Western Conference Final was their first since losing to the Carolina Hurricanes in the 2006 Stanley Cup Final.

The coach nets a lot of the credit for the turnaround.

“I think Jay came in and grabbed the group, took charge, made some tweaks, and that’s what was needed to get us going,” Holland. “Did a fabulous job.

“He was a big part of us getting to the final four.

“I think Jay came in. He took charge.”