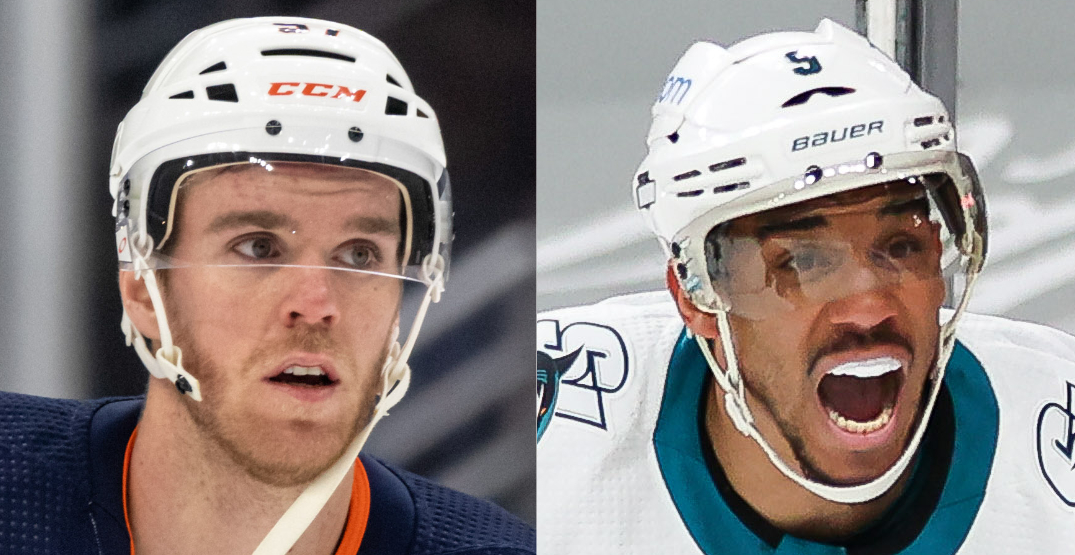 Connor McDavid is more fixed on what controversial free agent forward Evander Kane can bring to the Edmonton Oilers on the ice, and not the extra-curriculars that could come off of it.

The Oilers are rumoured to be one of the teams willing to invest in Kane, whose contract with the San Jose Sharks was terminated last week after he reportedly travelled to Vancouver without proper medical clearance while COVID-positive in December.

“It’s a situation that I don’t think we need to talk too much about until something is a little bit more official,” McDavid told media Wednesday. “Evander’s a great player and can help us a lot on the ice, and that’s first and foremost.

“Right now it’s all speculation and obviously Evander is an amazing player. He’s had lots of success over the last couple years.

“Whatever else has been going on is not something that I look into much.”

The Sharks placed Kane on unconditional waivers on Saturday and, after clearing, eliminated the final three-and-a-half years on his seven-year, $49 million contract on Sunday. The NHLPA has filed a grievance on Kane’s behalf.

He was suspended for 21 games by the NHL earlier this season after submitting a fake vaccination card to the Sharks, and was eventually vaccinated, according to SJ Hockey Now’s Sheng Peng.

In August, Kane’s ex-wife accused him of parental/spousal neglect, domestic abuse and claimed that he was throwing games as part of a gambling operation. The NHL said there was “no evidence” to support those claims following an investigation.

“But we’re not that far yet. I’m not jumping into that game yet. We’ve got nine players on the ice today for practice. There’s lots more to worry about with our group than whether a player decides he wants to come play for us.”

The Oilers have nine players currently in COVID-19 protocol, according to website Left Wing Lock.

Tippett side-stepped when asked about the Oilers’ current COVID outbreak in relation to Kane’s earlier suspension.

“I’m not going to try to coach a guy that’s not on our team,” Tippett said. “If he ends up in Edmonton you can ask me all those questions. But right now, it’s a moot point for me. I haven’t even thought about it.”

“I believe in second chances,” Oilers general manager Ken Holland said Tuesday. “It’s hard to be perfect. We’re all people. We all make mistakes. Some make big mistakes. Some make little mistakes. But it’s hard to be perfect. I think if somebody makes a decision or does something in their life and make a mistake, I think they have to try to learn from it and try to change and should be entitled to a second opportunity once they do some of those things.”

He had two goals and eight points in five games in a stint with the San Jose Barracuda of the American Hockey League after being assigned to the minors following his suspension, and last played on December 18, before entering COVID protocols on December 22.

“Kenny has our full support in what he does.”