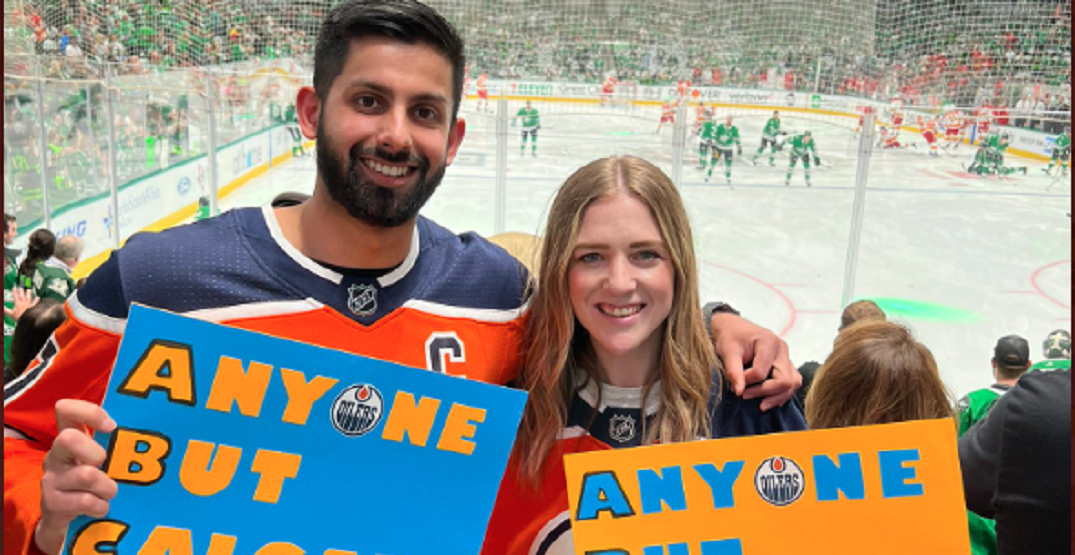 It’s just a fact at this point that Edmonton Oilers fans are a different breed with the lengths they’ll go to support their favourite team.

They’re hitting massive 50/50 totals, known for cheering so loud they can interrupt the team’s press conferences, and have travelled in droves to the team’s away games against the Los Angeles Kings in their own playoff series.

So much so that a pair of Oilers fans even pulled up to a Flames playoff game in Dallas to boo their cross-province rivals.

Decked out in matching Edmonton jerseys, Taylor Riar and Allie Larson made it pretty clear that they weren’t so much cheering for the home team, but rather rooting against their provincial rivals.

Sporting an ABC: Anybody But Calgary sign, the pair cracked the TNT broadcast of last night’s Game 3 at the American Airlines Center in Dallas.

Riar showed off the signs a bit more close up on Twitter.

The Oilers fans probably had a great night, as the Flames fell 4-2 to the Stars and are now trailing 2-1 in the series.

Riar explained that they were in town to catch a pair of Dallas Mavericks playoff games on Friday and Sunday, and flew down from Edmonton to support his favourite basketball team.

“All credit to Allie for making the signs before we took off,” he said. ” The Dallas fans were super welcoming and fun to be around.”

The Oilers themselves shouted out the pair on Twitter, saying “respect” for the move.

Meanwhile, the Stars themselves seemed alright with the move.

On the flip side of the signs, the pair had “Calgary Sucks” splattered on the poster board.

“We’ll allow it!” the Stars replied on Twitter. The enemy of my enemy is my friend, I guess?

Should the Oilers advance in the playoffs, they’ll take on the winner of the Calgary-Dallas series. But there’s still plenty of hockey for everyone to play before we can think too far ahead to second round matchups.

And while they went viral for their signs in Dallas, the pair is planning to be back at Rogers Place once the Oilers return home on Tuesday.