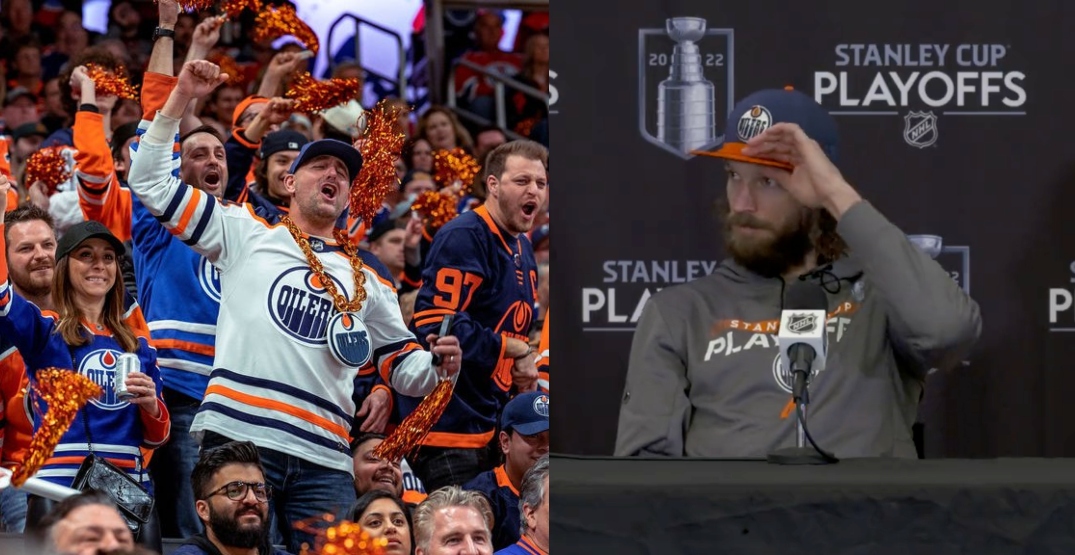 After watching their team win a playoff game with fans in attendance for the first time since 2017, Oilers fans took the party outside.

And they didn’t stop cheering.

Hundreds of Oilers fans could be heard throughout the post-game press conference, held in a unique spot at Rogers Place, in plain view of fans.

You can hear a pin drop in most post-game pressers, other than the reporter asking the question or the player/coach answering them. But not in Edmonton.

Fans could be heard chanting “Smitty Smitty” for Mike Smith, while the Oilers goaltender was speaking following his shutout performance. There were even chants of “we want the Cup,” with 15 wins to go.

"A bounce back is always important & tonight the team played up to the capabilities we're able to play."

“It is incredible, to be honest. They’re about 30 deep out there, I think,” said Smith. “I don’t know how long it goes on for, but it’s pretty incredible when you have a fan base like this, and they’re that excited about us having a chance to play for the Stanley Cup. We want to do anything possible to make that happen.

“Obviously it’s one game, we’ve won one game but it’s great to see the city feeling it and they deserve it because it’s a been a long time coming since they’ve been back in the building and the playoffs have been in Edmonton. Hopefully we can just keep this going and it’s a long road ahead and you can’t do it without loyal fans.”

Darnell Nurse was impressed too.

“This is an electric building at this time of year. As players, you feed off the energy they bring,” the Oilers defenceman said. “We want to be playing as long as possible to be enjoying this as long as possible. It’s a lot of fun to have the fans not only in the rink but celebrating after games (in the streets). It gives a lot of life to the group.”

"We stayed calm, believed in our structure & believed in the way we can play. With that said, it's one game. Still a lot of hockey left."

“I think we have the best fans in the NHL,” Oilers coach Jay Woodcroft added. “The most passionate, most knowledgeable and our team feels everybody’s support. It drives us forward and pushes us forward… We want to make this community proud.”