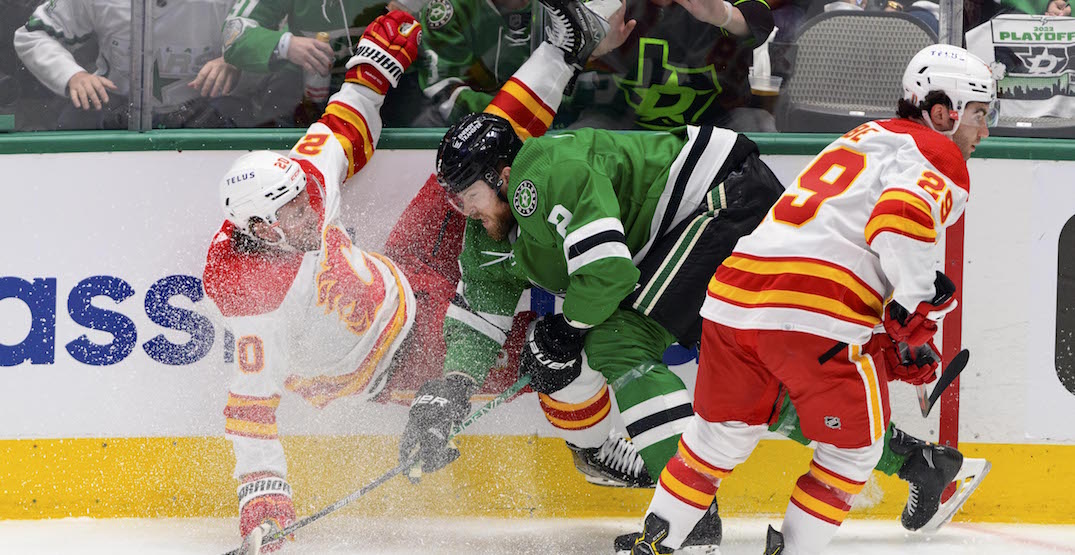 The Calgary Flames found the back of the net more than once for the first time in these playoffs but still came up short in a 4-2 loss to the Dallas Stars in Game 3.

Joe Pavelski scored two goals, including the game winner, and now has three of the five goals for the Stars in the series.

The Flames had a great chance to tie the game in the final minutes when Johnny Gaudreau was sprung on a breakaway, but Jake Oettinger made one of his 39 saves on the night.

The 23-year-old Stars netminder has stymied Calgary through the first three games of the series, stopping 93 of the 96 shots that he’s faced.

The Flames will need to figure out a way to get to Oettinger and the stingy Dallas defence, and after sticking with the same lineup in the first three games, it’ll be interesting to see if Darryl Sutter makes any adjustments ahead of Game 4 with their season suddenly in a bit of jeopardy. The first line’s two goals through three games is below their average output from the regular season, while the second and third lines have been held off the scoresheet entirely.

Game 3 had more goals through 40 minutes than the first two games combined, with both teams scoring a goal in each of the first two periods.

After the Stars went up 1-0 early, Calgary’s fourth line tied the game on a goal from Trevor Lewis that was challenged for goalie interference but determined to be a good goal.

Cleaned that rebound right up. pic.twitter.com/y9DOrw9KPC

The Flames top line gave them the lead in the second period, with Elias Lindholm potting his second goal of the postseason.

Matthew Tkachuk, wins a board battle.

Johnny Gaudreau, scoops up the puck and gets a perfect pass off his stick.

Elias Lindholm, rips a shot off from his office.

The Stars evened things back up later in the period despite an incredible glove save from Jacob Markstrom while stacking the pads earlier on the play.

What a save by Markstrom. What a response by Pavelski. 🤯

Though the Flames went 2-0-1 in the regular season series against Dallas and finished with 13 more points, they now find themselves trailing 2-1 in this best-of-seven series.

They’ll try to even the series in a pivotal Game 4 on Monday. Puck drops at 7:30 pm MT.