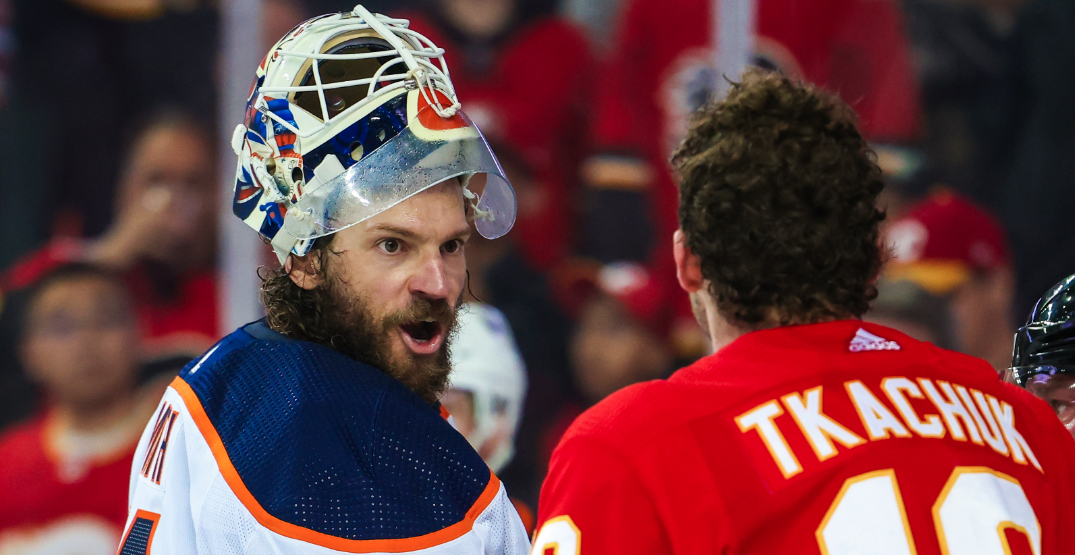 It didn’t take long for goaltender Mike Smith to start hating on the Calgary Flames.

Truth is, he might’ve started fuming before joining the Edmonton Oilers.

Smith, who played two seasons in Calgary before signing to Edmonton in October of 2020, quickly took to switching sides in the ‘Battle of Alberta’ after the Flames opted not to bring back the starting netminder, he told Sportsnet’s Colby Armstrong in a sit-down interview released Friday.

“You don’t become a puck-handling goalie by doing everything right, I can tell you that right now.” 😂

Mike Smith spoke to @armdog about bringing his fiery style of play to the @EdmontonOilers and how it felt to change sides in the Battle of Alberta.#StanleyCup | #LetsGoOilers pic.twitter.com/TkW7Nytxb8

“It was strange at first when I switched to Edmonton, but I was kind of choked when I left Calgary, so it was an easy transition to hate them off the bat,” Smith told Armstrong. “I really liked Calgary as a city. I really liked playing for the Flames. I loved the players on the team. So I hated the Oilers.

“Now you’re like, ‘okay, they didn’t want me back’ … that kind of left a bitter taste in my mouth. When someone doesn’t want you, especially with my personality, that really fired me up to go over here now, Oil Country, to really want to stick it to them.”

The rivalry has been sparked of late, thanks in large part to both franchises finding footing after floundering for much of the 2000s. The additions of Connor McDavid and Matthew Tkachuk have had wrinkles, as has Smith’s double-agent duty.

In 2020, things ramped up to a level not seen in decades with the Tkachuk-Zack Kassian feud, and Smith himself made national headlines when he and then-Flames goalie Cam Talbot dropped the glove and blocker for a bit of a lopsided brawl a month later.

The intensity hasn’t waned since, and heightened again this season when the Flames beat the Oilers in an energetic, entertaining 9-5 win on March 26 — the last meeting between the two teams.

The now 40-year-old Smith has helped the Oilers take a 2-1 series lead against the Los Angeles Kings in the opening round of the Stanley Cup Playoffs.

The Flames, coincidentally, are tied 1-1 in their series against the Dallas Stars.

Should each team win their respective series, the two teams would meet in the second round — their first matchup since a Smythe Division Semifinal in 1991.

Any playoff meeting would spark the ‘Battle of Alberta’ even further.

One, potentially, taken to new levels should things fall into place.