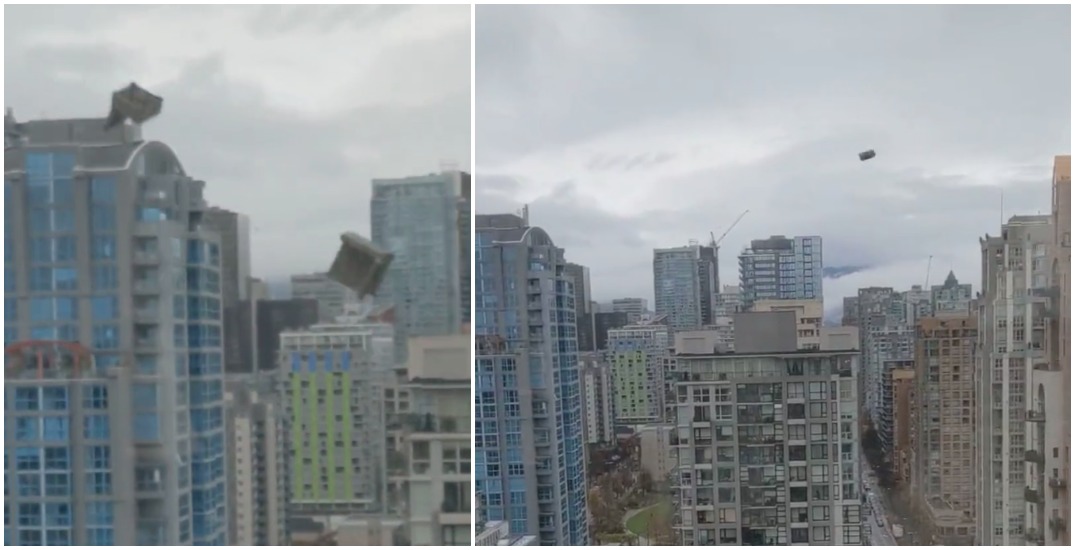 With all of Metro Vancouver under a wind warning as extreme weather causes devastation across the region, condo dwellers in Yaletown experienced an eye-popping sight Monday as gusts threw patio furniture off high-rise balconies.

Franklin Sayre shared a video from inside a building near George Wainborn Park showing people’s patio furniture becoming airborne over the downtown core.

Sayre said he was on the 30th floor of the building, and the furniture included lawn chairs and “big heavy stuff.”

He also captured video of a nearby high-rise that apparently had lost some of its blue and white exterior construction sheeting, which workers were trying to re-secure.

One of the pieces of furniture ended up on top of the awning of the Farm to Table Market on Richards Street, according to a Daily Hive reader.

also since taking this video this building has lost a ton of that white and blue sheeting. There’s guys up there working to secure it. pic.twitter.com/MAXJr5Vfcw

It wasn’t just patio furniture getting tossed in the gusts today. On the nearby Stanley Park Seawall, a loose unmoored barge ran aground at Sunset Beach, shocking onlookers.

Multiple weather warnings were in effect Monday across Metro Vancouver. Environment Canada warned that areas near the coast will experience strong wind gusts, with northwest winds reaching 70 km/hour and gusts up to 90 km/hour.

Winds were expected to remain strong throughout the afternoon.

In all areas, Environment Canada says people should exercise caution as high winds can cause tree limbs to break and cause power outages. High amounts of rainfall can cause rivers to flood and roadways to washout.