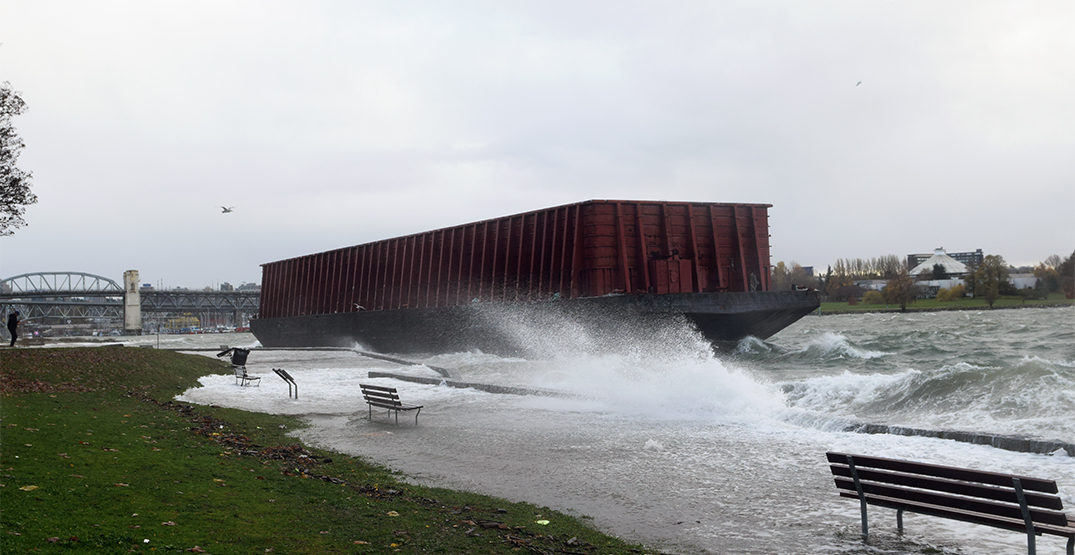 Editor’s note: A previous version of this story identified the boat as a container ship, which is incorrect.

A loose barge got blown into the seawall near Sunset Beach on Monday afternoon as heavy winds hit Metro Vancouver following an atmospheric river rainstorm.

Witness Jorge Amigo captured video of the waves carrying the boat to shore, with the Burrard Bridge visible in the background.

Another witness, Ben Glassco, captured video of the barge drifting towards the seawall from above.

Godfrey Tait, communications manager for the City of Vancouver’s Engineering Services Department, told Daily Hive that the undethered barge came aground against the rocks across from the AIDS memorial on Sunset Beach.

He added the Coast Guard was on scene to determine next steps for removing the barge.

Barges typically don’t have their own motors or crew, and are usually towed by tugboats. They are typically anchored when staying still.

The barge was seen moored in English Bay before this.

Someone has already made a Twitter account for the boat, and is using it to make Vancouver-specific jokes.

Line for @leesdonuts_ca always so long. Mind if I barge in? pic.twitter.com/1IQ1isI7Uy

The account’s bio says “I will not be controlled. Free-spirited barge.”