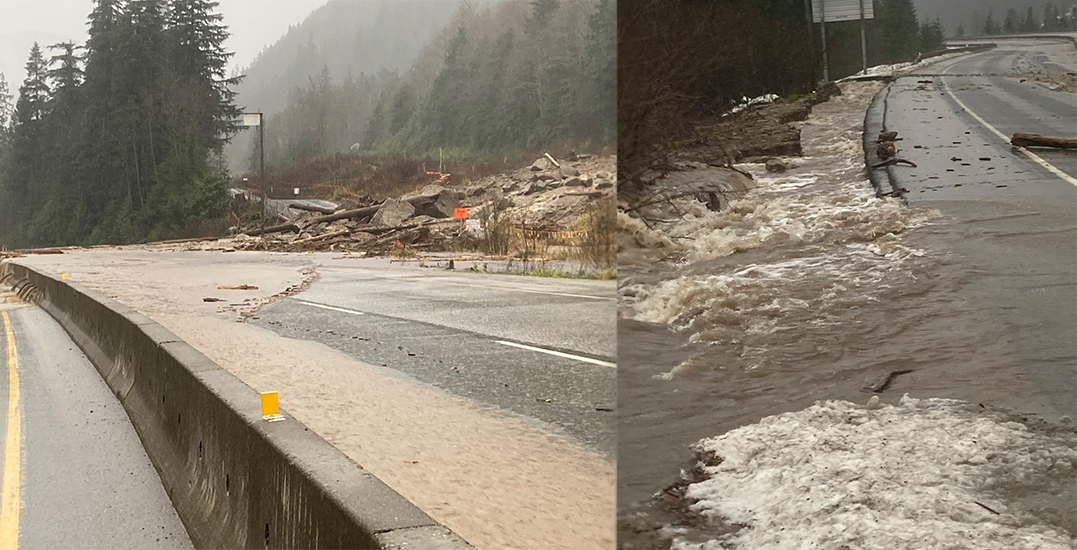 There are more than half a dozen highway closures in parts of British Columbia, as torrential rain, flooding and mudslides continues across the province.

And Vancouver is now essentially cut off from the rest of the province.

To leave the Lower Mainland of BC, you would need to use Highway 99, Highway 1, or the Coquihalla.

But all those routes have now been shutdown.

Highway 99 is closed north of Lillooet, with no estimated time of reopening.

Highway 1 is closed in both directions between Agassiz to Spences Bridge, as well as Sicamous to Revelstoke. Issues include heavy rain, mudslide events, flooding, and “sudden debris flow.”

The Coquihalla Highway also remains closed between Hope and Merritt, due to a mudslide between Exit 202 and Exit 217.

Southbound lanes of the #Coquihalla between between Larson Hill and Juliet. The lanes have been washed into the river.
Check @DriveBC for the latest info on #BCHwy5 and other highways impacted by the recent heavy rains. https://t.co/0sq39Ad5WN pic.twitter.com/X7HLUC5ZsC

Mudslides and flooding have also caused closures on Highway 3 at Sunshine Valley and east of Princeton.

In the Fraser Valley, Highway 7 is also closed between Maple Ridge and Hope, due to flooding between 240 Street and 272 Street for more than 6 km.

Highway 11 between Mission and Abbotsford is also closed due to flooding.

On Vancouver Island, Highway 1A in Cowichan Bay is also closed due to flooding.

Images and videos shared on social media detail the severity of the flooding and mudslides.

Oh your headed to #VancouverBC for a Monday morning delivery? You think you’re going to #PrinceGeorge, or #YEG? 🤣🤣🤣#BCHWY1 and #BCHwy5 CLOSED pic.twitter.com/CwjvuFdoLU

Reminder that #BCHwy3 east of #PrincetonBC is closed due to flooding. There is extensive flooding in some areas of the community. @TranBC @TranBC_OKS pic.twitter.com/trMRIyGIuK

A look at the #Coquihalla in the #BChwy5 Portia area. Crews are on site and engineers are assessing the risk and impact. Safety is our top priority.
Check @DriveBC for updates. pic.twitter.com/TjdHtkLEuP

Updates on highway closures across the province and other major transportation-related events can be found on Drive BC’s website or Twitter.