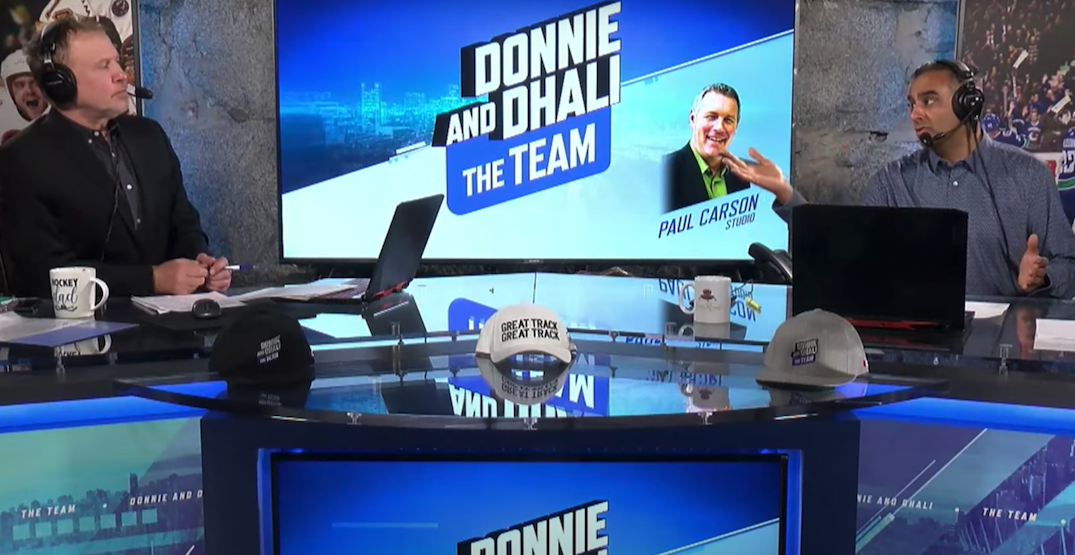 A number of changes were made across the Sportsnet Radio Network on Wednesday, and more changes locally could be on the horizon.

Sportsnet 650’s morning show is set with Halford and Brough, followed by a national show hosted by Jeff Marek that will run from 9-11 am. But what 650 will do after that is still a question mark.

Satiar Shah, Dan Riccio, Randip Janda, and Bik Nizzar all remain with the station, but how they will be utilized is still up in the air.

A 650 source told Daily Hive that “nothing has been confirmed here yet.” Expect that to be sorted shortly in time for the start of the NHL regular season.

While Don Taylor and Rick Dhaliwal have been enjoying success on television, an industry source confirmed that CHEK TV had been in talks to simulcast Donnie and Dhali on Sportsnet 650.

The two parties were unable to reach an agreement but those same sources have indicated that it could be revisited in the future.

Donnie and Dhali on CHEK runs from 10 am to noon. With Marek’s national show ending at 11 am PT, an agreement with CHEK TV, if it were to come to fruition, could potentially see the last hour of Donnie and Dhali airing on Sportsnet 650.

That hour would fit nicely into a schedule that would see the afternoon on 650 take shape with the remaining staff members.

Some industry insiders believe another syndicated program running from noon until 3 pm is still in the works with Vancouver’s lone sports radio station providing live local content in the morning and afternoon drive slots.

As we previously reported, a representative at Corus Entertainment has suggested that CKNW could be in the market to reacquire the Vancouver Canucks radio broadcast rights when they expire at the end of the 2021-22 season.

The Canucks have moved the team’s radio rights twice during the Aquilini ownership, first from CKNW to what was then TEAM 1040 in 2006, and then to Sportsnet 650 in 2017.

Rogers currently has exclusive negotiating rights for a renewal but in December, the Canucks can take those rights to market, and there will be interest.

“Sportsnet wants the Canucks back, but they haven’t hit a home run in the ratings at any point in their existence,” a source told Daily Hive.

Changes to the broadcast rights usually happen in the spring, but don’t be surprised if there’s an announcement early in 2022.

After calling games while viewing a monitor in Vancouver last season, Brendan Batchelor and Corey Hirsch are back on the road in 2021-22. They’re planning to travel to every Canucks away game for Sportsnet 650, which is something that not every radio team across the NHL is planning to do.

All the Canadian radio teams, with the exception of Toronto, have decided to travel this season to call games from the arena instead of their home radio station. Other teams traveling this season include the Bruins, Wild, Sharks, Blues, Blue Jackets, and Hurricanes. The Stars, Rangers, and Panthers radio teams are among the group staying home to start the season.

Surman and the Lions

Don’t be surprised if Karen Surman returns to BC Lions broadcasts or perhaps another role within the organization, following Sportsnet’s cancellation of the Rintoul and Surman show. Surman held the sideline reporter role when Lions games were broadcast on TSN 1040, but when she went to Sportsnet that relationship ended.

It could be a perfect fit for both parties.

Surman is currently working on getting healthy after an accident left her with an injured jaw and unable to perform on-air duties. We wish her a speedy recovery.

Go Goat Sports, the company behind Sekeres and Price, is almost set to open their new studio, located at the Sheraton Wall Centre near the corner of Hornby and Nelson.

People walking by will be able to see Matt Sekeres and Blake Price live in action, though they won’t be able to hear anything on the other side of the glass.

“Not open concept obviously, so you would need a device to listen along. But stop, gawk, and point like we’re zoo animals… yes,” Sekeres joked.