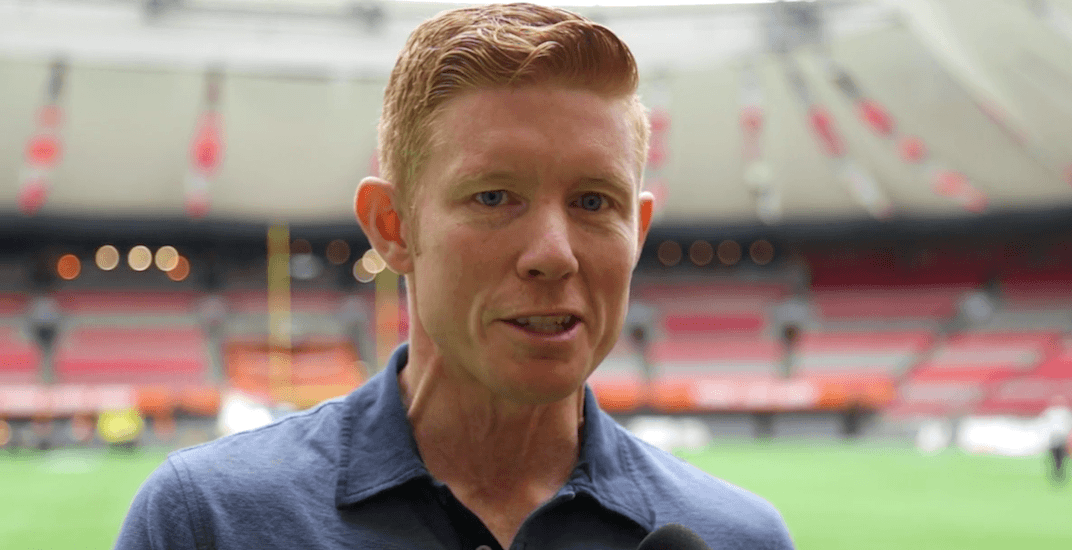 Today was another tough day on the local sports radio scene.

Scott Rintoul has been let go by Sportsnet 650. The longtime local broadcaster confirmed the news in a message posted to Twitter this morning. Rintoul had been hosting a four-hour-long show with Karen Surman, from 9 am to 1 pm PT, that aired in Vancouver and Sportsnet 960 in Calgary.

“Our show is part of the changes that Sportsnet has decided to make today,” Rintoul said, before thanking the people he worked with across the country. The always-classy broadcaster then thanked the audience, including the haters.

“I know there are exciting opportunities that lie ahead, and I’m eager to embrace them,” he added. “I look forward to sharing them with you ASAP.”

I’m pretty sure I’m supposed to lead with:

Rintoul was one of the original broadcasters hired by Sportsnet 650, when the station launched in Vancouver in 2017. He left TSN 1040 to host the station’s first-ever afternoon drive show.

Longtime on-air personality Adam Forsythe has also confirmed that he was also part of the layoffs today.

Surman, who was previously with TSN 1040, joined Sportsnet 650 in March. She is currently on medical leave due to an injury she suffered a few weeks ago.

“Really tough and sad news about the show today,” she said in a message posted to Twitter. “I worked with some really talented people over the past few months on that show and will be forever grateful for that.”

Of the original nine hosts on Sportsnet 650, just two remain from 2017: Satiar Shah and Randip Janda. Even program director Craig MacEwen has left the station, taking a job in public relations with the Vancouver Canucks last month.

The Rintoul and Surman time slot will be replaced, in part, by a new national show hosted by Jeff Marek.

The Jeff Marek Show will be heard in Vancouver from 9 am to 11 am — right after Sportsnet 650’s morning show, Halford and Brough.

“Sportsnet insider Jeff Marek is joined by a rotating cast of contributors during this new national NHL show airing daily across the Sportsnet Radio Network and available on-demand,” Sportsnet said in a media release.

Full Sportsnet release with many of the changes happening in Toronto. Nick Kypreos is back. pic.twitter.com/asB3yGj0LL

Among the additions to the Sportsnet 590 The Fan in Toronto is the rehiring of Nick Kypreos, who parted ways with Sportsnet two years ago.

It’s been a tough year for sports radio in Vancouver, as TSN 1040 was pulled off the air seven months ago, with Sportsnet 650 laying off three on-air hosts a month after that.

One former 1040 broadcaster is resurfacing in Seattle, according to a Daily Hive’s resident sports media expert Tyler Green. Former Canucks radio colour commentator Dave Tomlinson will be part of Seattle Kraken broadcasts on KJR, according to Green.

Tomlinson was part of Canucks radio broadcasts for seven years, taking over from Tom Larscheid in 2010 until TSN 1040 lost the broadcast rights in 2017.