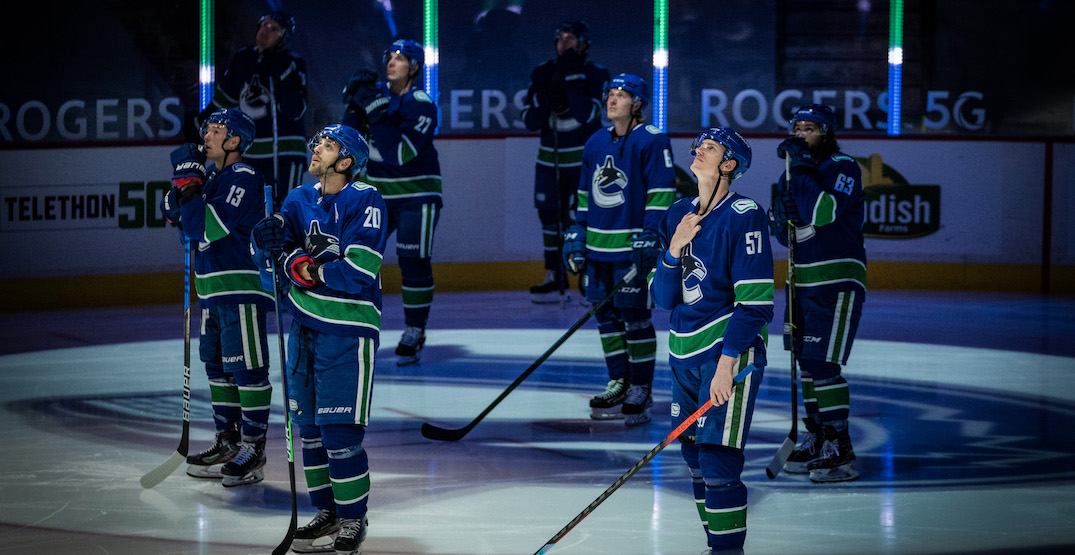 The local sports radio landscape could look different in the next few months and years, as things continue to evolve behind the scenes.

The latest potential change could see CKNW becoming a major player in the sports broadcasting game once again. Sources within Corus Entertainment, the group that owns CKNW, have confirmed to Daily Hive that the company is interested in making bid on the Vancouver Canucks radio rights next year.

“We want to take a serious look at the rights to bring the Vancouver Canucks radio back to the station where it all began,” a Corus source, who wished to remain anonymous, told Daily Hive.

CKNW aired every Canucks game on radio from their inaugural season in 1970 to 2006, before losing the rights to Team 1040. Rogers-owned Sportsnet 650 has held the Canucks radio rights since 2017, but that deal is set to expire at the end of the 2021-22 season.

Corus Entertainment secured the radio broadcasts rights for the Winnipeg Jets last October. That precedent is an indicator of Corus’ level of interest in being back in the sports game.

In Vancouver, Corus already has the radio broadcast rights for both the Vancouver Whitecaps and BC Lions. Both of those entities are broadcast on CKNW’s sister station, AM 730, which currently broadcasts an all-day traffic format.

Those moves have created speculation that AM 730 is ripe for a format switch to all-sports radio. A source inside Corus confirmed to Daily Hive that it is “something of interest.”

“The key factors are what it will cost and how much revenue it might be able to generate in comparison to what is currently being broadcast. As with everything, we will do an analysis and make a decision based on those factors,” the source said.

“We brought back the Jets to CJOB in Winnipeg, so that gave us an indication of what is needed for the Canucks on CKNW 980, but a sports radio station is another thing altogether. We will have to do our due diligence, but yes, it’s something of interest.”

Of note, I’m told a sports radio station will only happen if CKNW secures the Canucks rights. If those are retained by Sportsnet, it’s a non-starter.

At the time of publishing, Sportsnet 650 still hasn’t decided whether their Canucks broadcasting team of Brendan Batchelor and Corey Hirsch will be travelling with the team this season.

That’s still currently tied up in Toronto at Rogers HQ. Like most broadcasters last season, Batchelor and Hirsch called home games from Rogers Arena, and road games off a monitor back in Vancouver.

So far the Columbus Blue Jackets radio broadcast team is the only NHL team to confirm their travel plans to Vancouver for the 2021-22 season. With international travel still complicated due to the pandemic, as well as cost savings by keeping broadcasters at home, some teams may decide to sit at home again this season — or at least for the time being.

Changes at the top at Sportsnet 650

Speaking of changes, expect a few moves at Sportsnet 650 over the course of the next few weeks. Rogers Media announced that Dan Toman was hired as the director of audio programming, “overseeing audio and live radio programming at Sportsnet, including FAN590, Sportsnet650 and Sportsnet960.” Toman comes from a role of head of content at Yahoo Sports Canada.

The station will also need to fill MacEwen’s on-air role, as he has been co-hosting with Bik Nizzar during the early afternoon slot.

Sportsnet could hire someone to handle day-to-day operations responsibilities with the big picture stuff being handled under the direction of the national program director in Toman. Sportsnet 650’s current assistant program director under MacEwen is Art Factora. Factora has long been a background player in radio and an assistant programmer just waiting for his shot. This might be the perfect opportunity.

Trevor Martins, who was the program director for the now defunct TSN 1040, is also a strong candidate. Mike Whittingham, who was also a program director at TSN 1040 for a time, and currently produces the BC Lions broadcast on AM 730, could also be considered.

Other changes may come as well, as Toman will assess what’s happening in each of the markets. As with any organization, a new person at the top means they want to make their mark and leave their stamp on the product. What those changes will be, will have to wait until Toman has spent a bit more time in the role.