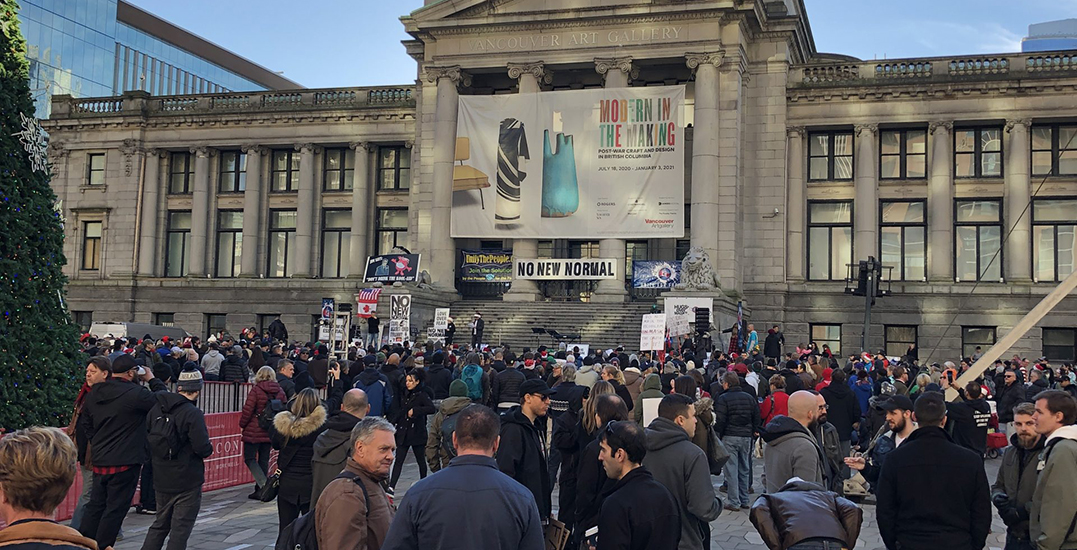 An anti-mask protest that took place in December 2020 (Submitted)

An open letter is calling on the Vancouver Police Department (VPD) for further action and more accountability ahead of an anti-mask rally taking place in downtown Vancouver this weekend.

The “BC Grand Freedom Rally” is scheduled for Saturday, February 20 between 12:30 and 4 pm at the Vancouver Art Gallery. It’s one of many anti-lockdown protests that have been held in downtown Vancouver since the start of the pandemic.

According to the event flyer and Facebook page, the gathering will have a “packed lineup of courageous speakers and truth warriors” and “COVID-19 and vaccine truths revealed by real medical experts.”

Mark Donnelly, former anthem singer for the Vancouver Canucks will also be in attendance. The Canucks cut ties with Donnelly in December 2020, after he was scheduled to sing at an earlier anti-mask rally.

Prior to this weekend’s protest, however, a group called “Unmask the Right” launched a website and open letter voicing their concerns over the upcoming event.

The website includes “profiles of the main instigators and rally speakers.” It also calls for people to sign an open letter to the VPD, demanding more accountability and enforcement over these gatherings.

Previous demonstrations have been attended by police but the organizers and attendees were not fined.

Fines and tickets have been issued in different jurisdictions in BC and Canada. For example, the organizer of a protest in Kelowna last December was fined $2,300 for breaking BC’s COVID-19 restrictions.

“It is possible the VPD is simply overwhelmed by the complexity of balancing these requirements,” reads the open letter. “However, we are gravely concerned by the lack of response to these activities to date and note the discrepancy between the lack of action here compared with many other jurisdictions in BC and across Canada.

As of British Columbia’s latest COVID-19 health orders, all events are suspended in an effort to reduce transmission and keep schools and workplaces open.

The order includes gatherings at hotels, bars, and movie theatres, as well as demonstrations and rallies of any kind.

The VPD tells Daily Hive that they’re “aware of the planned protest” and “will have officers on site that day to respond if anything should arise.”

Editor’s note: A previous version of this story erroneously stated the protest was taking place on January 20. The story has since been amended with the correct date.