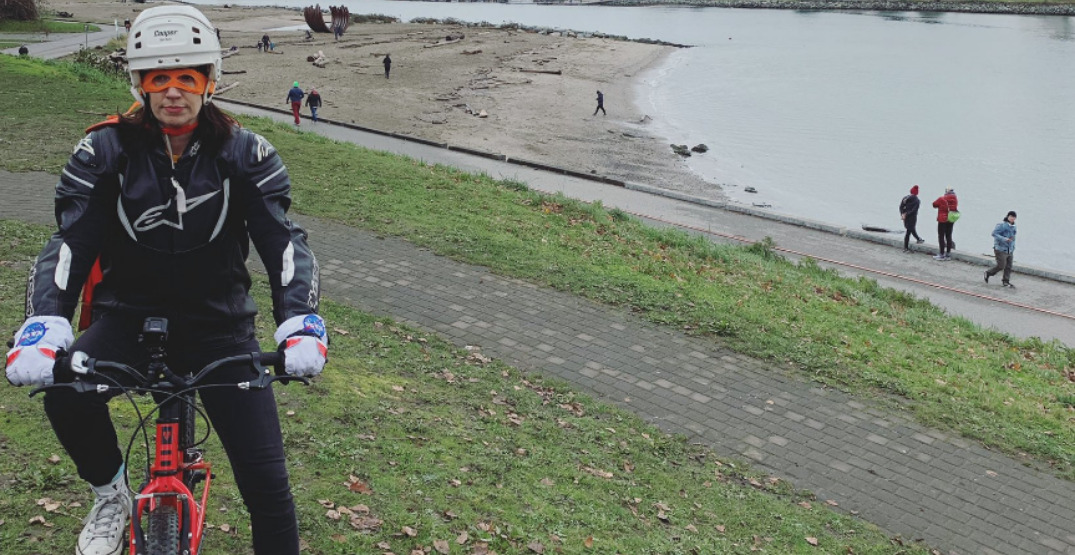 The English Bay barge has spawned memes, led to bridge closures and has now been the focal point of a daring stunt jump for a Vancouver radio host.

Peak 102.7 morning show duo “Super” Charis Hogg and Jeremy Baker were at English Bay on Thursday morning for the spectacle. If the jump went as planned, it would’ve seen the radio-host-turned-daredevil, Super Charis, flying over the beloved Vancouver barge.

In a conversation with Daily Hive, Super Charis talked a little bit about what inspired the event.

“The barge is inspiring in itself. It’s art, right in front of us. The only part of this whole disastrous event that can bring us some joy. So Jeremy said, I’m gonna build a ramp, why don’t you jump off it and see if you can clear the barge? And I said I have a cape and a bike, I’m in.”

Super Charis did indeed have a cape, a bicycle, and some fantastic safety goggles.

Super Charis ended up face-first on the ground, but she thankfully walked away with just minor injuries. “Some colourful bruising on my legs but nothing serious.”

“I hope the barge continues to bring the people of our city joy amidst all the chaos and sadness. At least until the tugs come and take it away.” 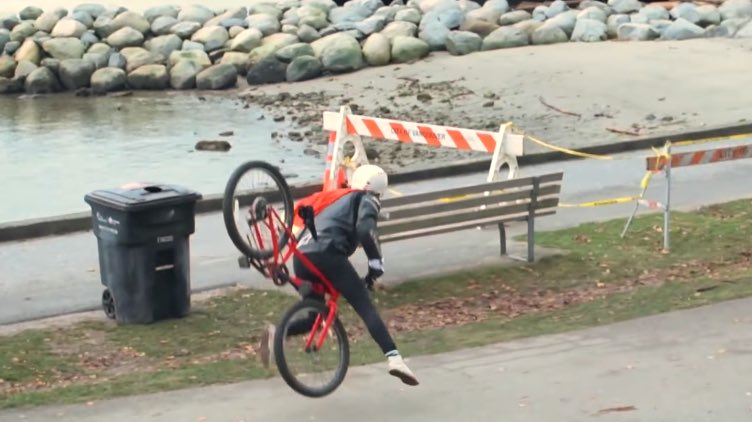 A makeshift ramp was put together by Baker, the “engineer” behind it. The main problem, as you can see in the video, was that Super Charis completely missed the ramp.

“I designed the sweet jump so that if Charis had hit it as intended, I believe it would have sent her soaring clear over the English Bay barge,” said Baker.

“Super Charis almost died in the making of our radio stunt. At this time we don’t have a sequel planned.”

“I think right at the end I missed the entrance to the ramp because the grass was slippery and the barge did move just a bit and it threw my calculations off. Had no time to recover,” said Super Charis.

Debate Club: what should Super Charis jump next? – @CharisHogg & @Jeremy_Baker

They won’t have much time to plan another jump, as the barge is going to be moved at the next king tide.