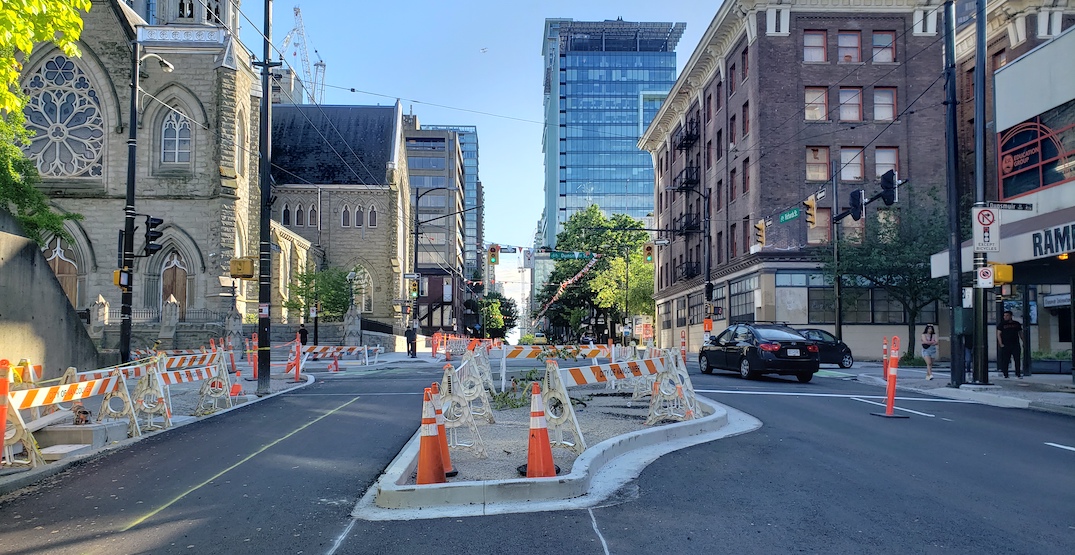 A number of new medium- to long-term infrastructure and civic facility projects, as well as some maintenance work, in the City of Vancouver’s pipeline have been impacted by COVID-19.

City council will review city staff’s pandemic impacts update report this week that includes details on a number of capital projects that have been affected, but not necessarily because of the municipal government’s fiscal crisis.

Physical distancing measures have prevented the city from performing the public consultation needed to progress on the City Hall campus renewal and expansion master plan, West End Community Centre and Joe Fortes Library project, new Bute Greenway with bike lanes, Chinatown Cultural Partnership, Chinatown Memorial Square renewal, and new Marpole Civic Centre at the intersection of Granville Street and West 6th Avenue. All of these are all projects currently in the early planning and scoping phase.

Other impacted projects, but in the more advanced phase of detailed design, are the Chinese Society Buildings renewal and the archive renewal and relocation project.

Municipal governments are usually provided with annual funding from TransLink to help cover the cost of maintaining and rehabilitating roadways that are considered part of the regional Major Road Network. But the public transit authority’s fiscal crisis has forced it to defer its 2020 funding program to municipalities.

For the City of Vancouver, this will mean reducing a number of activities that maintain the major roads in good repair, as well as temporary scope changes to the under-construction Nanaimo Street redesign, which will improve the street for pedestrians and cyclists. The city says due to the reduction in funding from TransLink, it is unlikely it will be able to fully repave the street this year, and an interim paint plan will be created only when the city can fully fund a repave in future years.

There were also some impacts to the Richards Street bike lane project, with construction slowing down slightly in April due to “resourcing impacts,” but construction is now back on schedule. Construction began in January and is anticipated to reach completion in Spring 2021.

Other COVID-19 related fiscal cutbacks of about $1 million have delayed new measures intended to improve street cleaning, including litter pickup and street sweeping in downtown and tourist areas, as well as off-leash dog parks and dog waste collection program.

When it comes to better management of the “volume and complexity of development,” the city has delayed staffing increases for its engineering and planning, urban design, and sustainability departments. These cuts will result in $1.73 million in savings in 2020.

As well, the development, buildings, and licensing department is reviewing new hiring and holding vacancies, which may impact permit processing times, timeliness of building inspections that could slow down granting occupancy, and property use inspections.

In other areas, the city-scale planning project of creating the new Vancouver Plan has been adjusted to include a framework that incorporates COVID-19 recovery. Additionally, this planning process has seen its budget reduced by $3.4 million in 2020 due to a significant downscaling in public consultation.

The city’s other concurrent city-scale planning project, the Broadway Plan, was originally set for City Council’s review and approval in late 2020, but this review of the final draft plan is not expected until the third quarter of 2021 due to the need for more public consultation.

Currently, the municipal government is forecasting a $136 million revenue shortfall for the 2020 budget, but this is being mitigated by $64 million in staffing changes such as temporary layoffs and hiring freezes, $20 million in operational efficiencies and capital project deferrals and scope reductions, and $52 million from reserves.