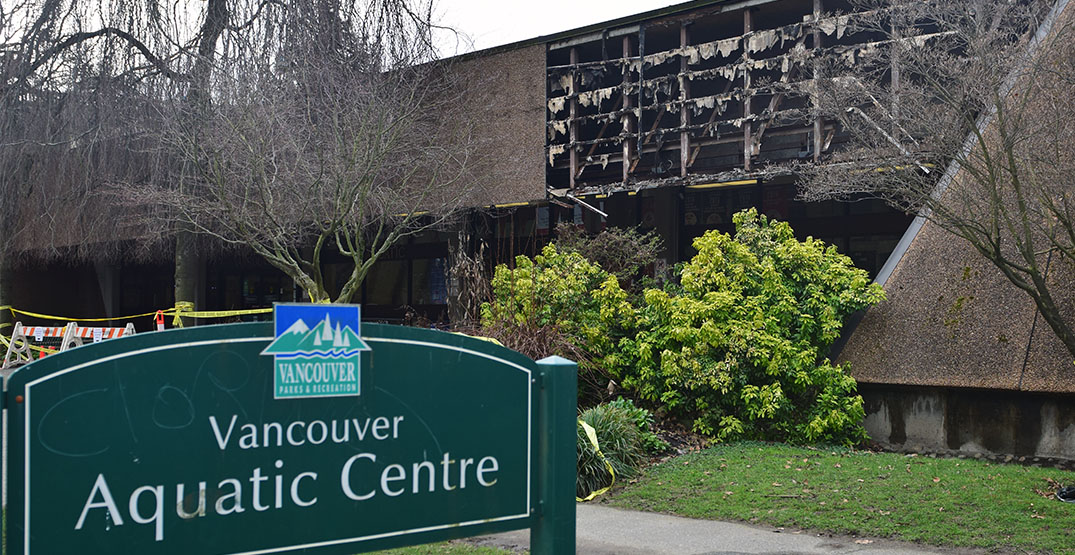 More than half of the community centre facilities owned by the City of Vancouver are in a poor condition, and there are now calls for a sweeping renewal program — but that could take decades.

In a report, Vancouver Park Board staff stated 11 community centres are either in “poor” or “very poor” condition, and will require major reinvestments for renovations or replacement over the next 10 to 20 years.

This report also comes just weeks after a portion of the exterior wall at the main entrance into Vancouver Aquatic Centre at Sunset Beach collapsed.

There are 27 community centres owned by the city, with 24 facilities under the jurisdiction of the Park Board, and three under the main city government.

Most of the 24 community centres under the Park Board were built between 1945 and 1980, according to Park Board staff. Many of these facilities have varying high degrees of seismic risk.

Several minor community centres opened over a decade ago, but the last major comprehensive community centre to open was Hillcrest Community Centre, which initially opened in 2009 with the funding support of VANOC for its use as the curling venue for the 2010 Olympics. 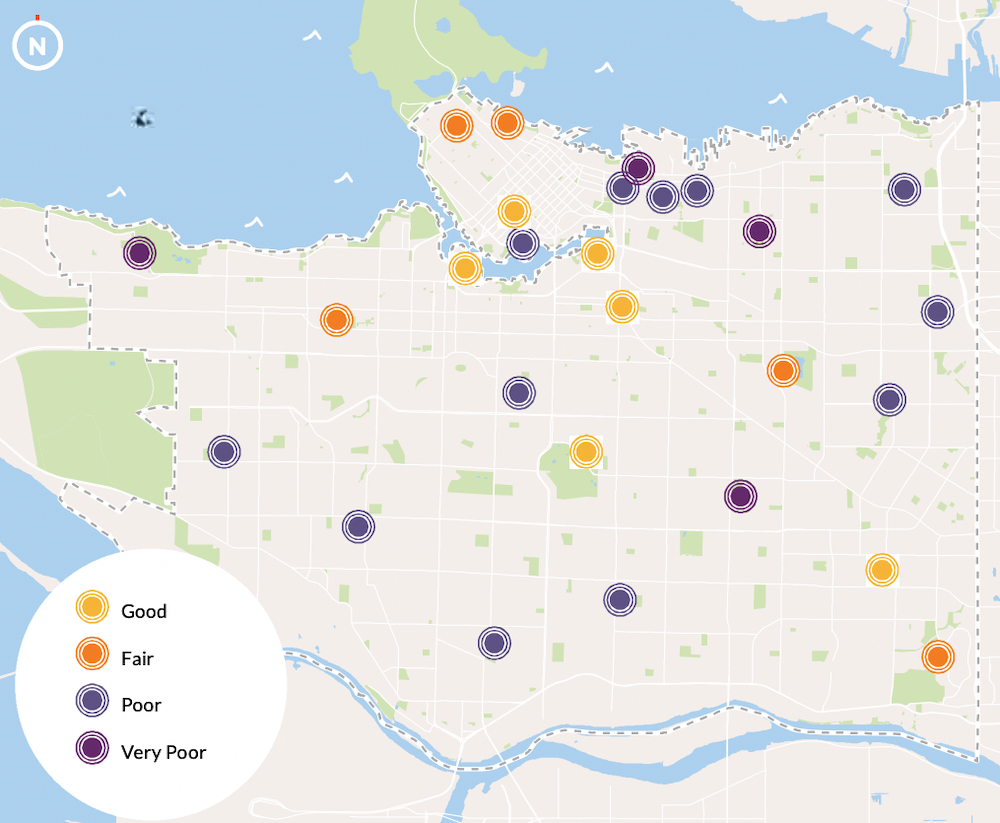 Map of the condition of the City of Vancouver’s 27 community centres. (Vancouver Park Board)

The Park Board was previously expected to deliberate the community centre renewal strategy last year, but this planning work was delayed by the pandemic. In the order of severity of the poor condition of the facilities, the 11 community centres now prioritized for renewal are:

Coupar says he found it problematic that some of these facilities will be 90 years old by the time they are replaced, and that there should be a greater emphasis on seismic risk.

“I just can’t support leaving some of these community centres so low on the list that they can’t be replaced until they’re virtually falling down,” said Coupar.

Barker added she wanted to see broader considerations for the structural condition and safety of the aging buildings that go beyond seismic considerations. She noted such facilities, for example, are critical as neighbourhood cooling centres during hot weather events.

“I’m not able to support this. To me, it comes down to the safety. If we’re looking at the safety of the people who live in these neighbourhoods, if they don’t have a safe place to go at the time of disaster, that concerns me,” said Barker.

“But it does concern me that we haven’t just looked at the safety of the buildings, and Vancouver Aquatic Centre shows that our buildings are getting old, and bad things are happening. We’re not looking at it for the public’s safety.” 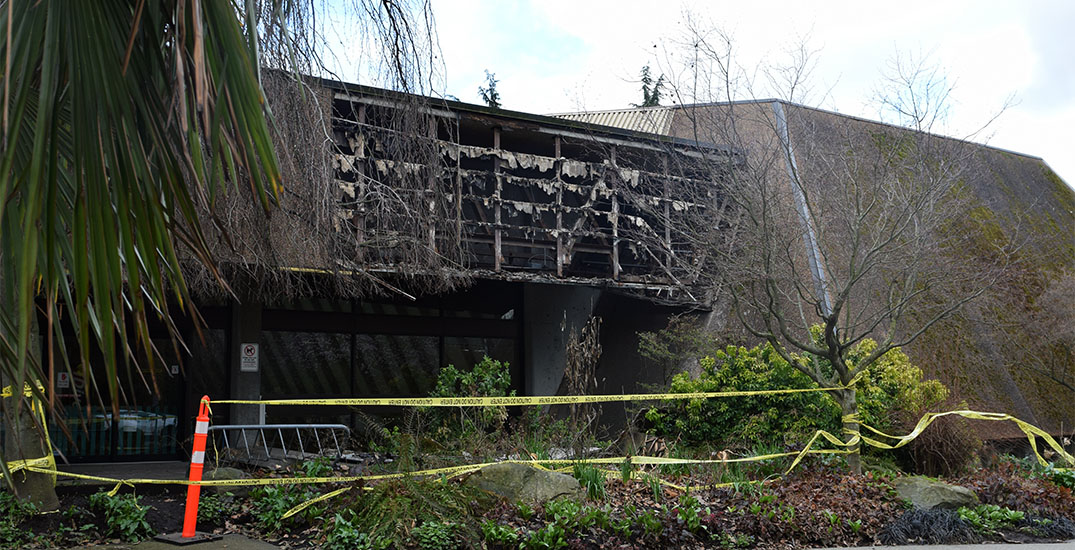 But finding the funding for the likely combined cost of replacing all of these facilities, likely in the hundreds of millions of dollars or even over a billion dollars with inflation, is an entirely different matter that determines the actual progress. The design and planning process for the three most dire facilities — Kensington, Renfrew, and Hastings — can also only begin when funding is made available for this pre-construction process.

COPE commissioner Gwen Giesbrecht suggested by the time the 11 facilities are properly renewed in a few decades, another dozen facilities could be in similar condition.

For this reason, she made an amendment that asks the main city administration to discuss with the provincial government making potential legislative changes that would allow funds raised through the city’s development cost levies (DCLs) and community amenity contributions (CACs) — collected from developers through their new building developments — to go towards the costs of renewing, replacing, and maintaining facilities. This direction was approved by a majority of commissioners.

Coupar says the proportion of DCLs that go to the Park Board recently decreased from 42% to 16%. Giesbrecht added that this proportion was reduced because the Park Board had unspent DCLs, but her amendment is an attempt to allow for DCLs revenues to be used for needed expenditures.

“With so many amenities falling apart, literally, why are developer levy funds sitting unused in an account?” quipped Giesbrecht.

There is no capacity in the Park Board’s existing capital budget to achieve the pace of upgrades, with about $125 million in the current 2019-2022 capital plan completely budgeted.

All capital plans endorsed by Park Board commissioners are subject to final approval by Vancouver City Council.

In 2019, the Park Board approved the 25-year VanSplash plan of expanding and improving the city’s swimming pools and beaches, including the replacement of Vancouver Aquatic Centre, with a combined estimated cost at the time of $350 million. While a strategy was completed by the Park Board, VanSplash has not been paired with the necessary capital funding to make any meaningful progress.

While Vancouver is struggling to replace aging community centres and meet the demand of future population growth, other municipalities in Metro Vancouver have been engaged in a community and recreational centre building spree, especially Burnaby. 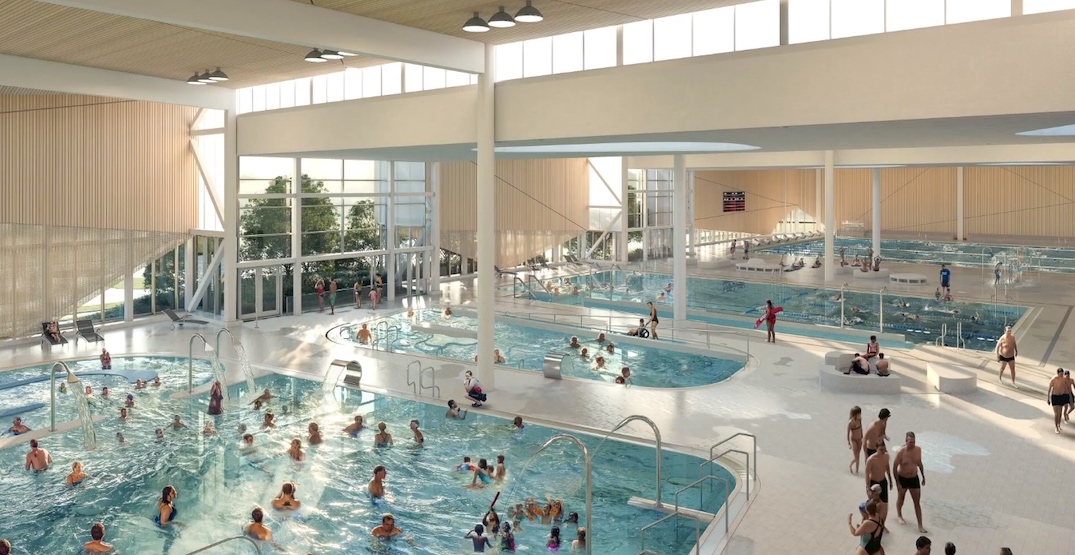 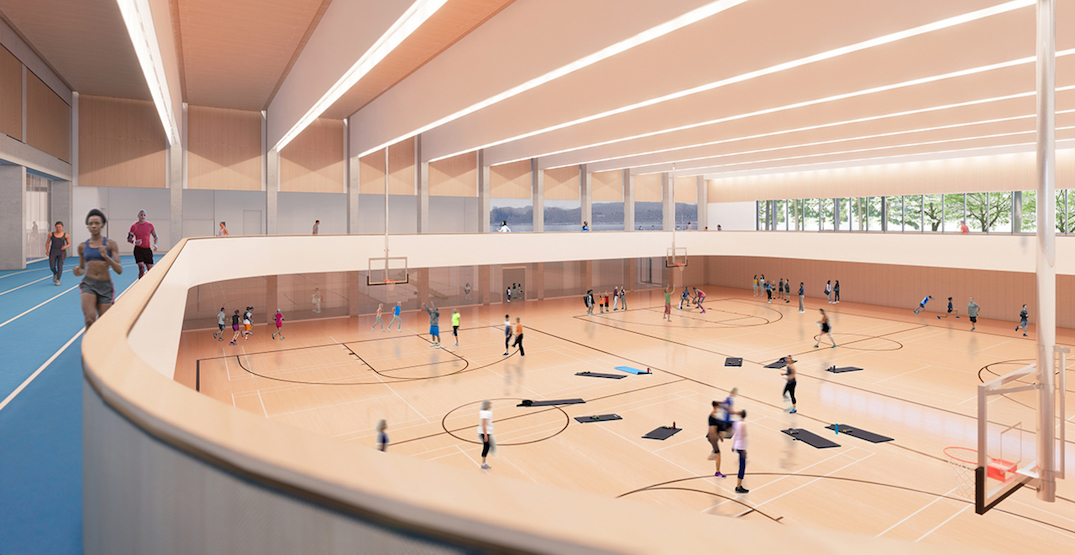 Artistic rendering of the gymnasium and running track at the new Cameron Community Centre. (Diamond Schmitt Architects/City of Burnaby)