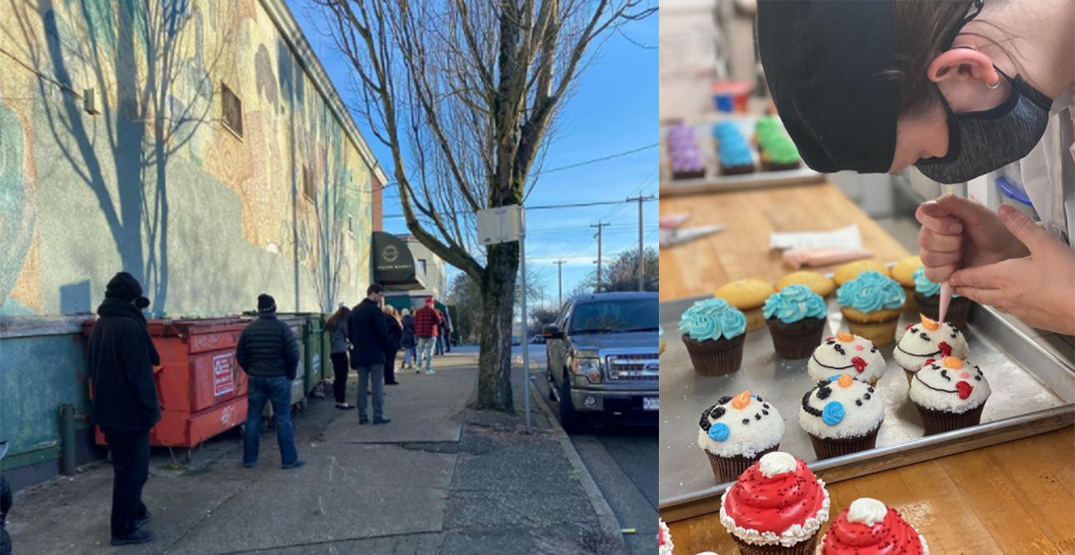 Fratelli European Bakery allows two customers inside at once. The rest wait in a physically distanced line outside. (@fratellibaker/Instagram)

An Italian bakery on Commercial Drive is the latest Vancouver eatery to raise the alarm about the impact on employees’ mental health. Marco Cornale, owner of Fratelli Bakery, has seen an escalation lately of customers causing grief for employees.

“We get the odd person coming in with no mask, and telling them [to mask] it’s like a broken record,” he told Daily Hive. “This has been going on for a year. It’s not like it’s new.”

This week customers have said it’s “against their rights” to have to wear a mask, yelled at staff, and at one point customers were yelling at each other over a lack of physical distancing.

“People are just tired and really frustrated. And they’re taking it out on retail staff. That’s what pisses me off,” he said.

The bakery has one location on Commercial Drive and another in New Westminster, and troubling incidents have happened at both. Cornale said it amounts to bullying, especially when an older customer is shouting at a 20-year-old associate.

“I’m not sure how they have this entitled right to come in and yell when they’re just doing their jobs,” Cornale said.

After posting about the issue on his bakery’s Instagram, Cornale said he got messages from other Commercial Drive businesses experiencing similar problems.

Earlier this month staff at Kerrisdale Cameras were berated by an anti-masker who came into the store. The shop’s owners thanked the community for its support, and revealed that the business received angry phone calls and nasty online reviews from other anti-maskers after speaking out about the incident.

Les Amis du Fromage, a cheese shop with locations in Kitsilano and East Vancouver, also asked customers to be respectful after a disturbing interaction on February 10.

Co-owner Allison Spurrell told Daily Hive that a man became verbally abusive to the store manager after she asked him to wait outside while his partner completed their purchase. The Kitsilano shop can only have three people inside, and there was a lineup on the busy afternoon.

“Anybody knows these are not normal times. This is COVID … None of us can do the things we want to do. Why take it out on somebody that’s just doing their job and trying to provide service for people?”

Spurrell said 99% of her customers are very kind and respectful, but unfortunately it’s the 1% who are rude or entitled that can an employee’s day.

She’s had customers turn up saying they can’t or don’t want to wear a mask, but she never lets them in.

She shared the experience to the cheese store’s Instagram, asking patrons to consider the difficulties small businesses are experiencing right now.

Provincial Health Officer Dr. Bonnie Henry has urged British Columbians to “be kind, be calm, and be safe” for nearly a year now, but apparently some people visiting local businesses have missed the message.

Henry has previously said that those who disagree with mask-wearing should stay home and instead shop online.

“I have no time for people who believe that wearing a mask somehow makes them ill or wearing one is somehow a sign of a lack of freedom,” she said at a November 25 news conference.

As for Cornale’s bakery, he just wishes everyone would follow the rules and treat frontline workers with respect.