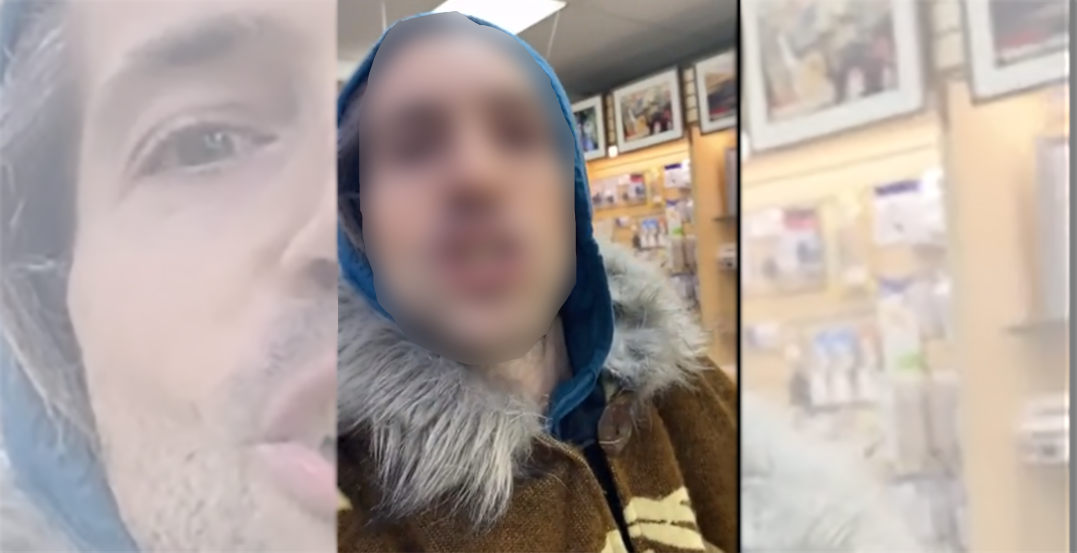 An anti-masker berated the employees at a camera store in Vancouver last week and captured the visit on Instagram Live.

The incident happened at Kerrisdale Cameras in Vancouver on February 9. The anti-masker filmed the incident, and the video was later shared on Reddit by an employee at the store.

“This anti-masker came into my work, refused to wear a mask, then blasted it on IG Live…” reads the Reddit post.

The three-minute video shows the man speak to several employees at the store before eventually leaving.

“For the record, here we are, February 9. I’m being refused service in this shop where I’ve spent thousands of dollars because I’m not wearing a mask,” he says.

“This is discrimination. I will be filing under the Canadian Charter of Rights and Freedoms… You will be taken to court.”

One employee explains that although the anti-masker isn’t allowed to shop inside the store, they can place an order online. Another employee stresses that mask usage while indoors is required by WorkSafeBC.

“What’s amazing is the level of brain-washing the vast majority of the public are under,” the anti-masker says.

“I came here because I don’t want to spend my money on Amazon. Because I like local businesses, I love my country, and I love people who spend money at real shops. That’s why I came in here, guys.”

This Antimasker came into my work, refused to wear a mask, then blasted if on IG Live… from r/vancouver

“You turn me away and now you want me to go on Amazon when I wanted to support a local business.”

Linda Hudson, president and owner of Kerrisdale Cameras, tells Daily Hive that while the man wasn’t initially filming when he entered the store, he “made it very clear that he wasn’t wearing a mask.”

“Not because he was medically exempt – he wasn’t – but he refused to wear a mask because of ‘human rights,'” she says in an interview. “Our staff pressed the panic button to contact the local security company, staff then called 911, and a number of us came down from the office and warehouse so that our salespeople weren’t alone with this guy.”

And although police were called, Hudson says they haven’t received much help from the authorities.

“We have a file number, we have a constable number, but we haven’t been able to reach out to them. We’ve simply been told that if this guy comes back or of another anti-masker comes in we’re to call them,” she explains. “Retailers are kind of left on their own to their own devices – you’re getting harassed and what do you do?”

Fortunately, the retailer has received some messages of support from the public, saying that they’ll be passing by to shop at Kerrisdale Cameras.

“We’re getting some phone calls, emails, and some posts online that people are going to come in and shop with us. We don’t really know what to expect, but we appreciate the support regardless. Our staff are doing what other retailers and small businesses are doing – we’re just trying to do the right thing.”

Last November, BC Minister of Public Safety and Solicitor General Mike Farnworth announced new enforcement measures in effect for those who don’t comply with the provincial mandatory mask order.

Anyone without a mask in an indoor public place, or who refuses to comply with the direction of an enforcement officer – including the direction to leave the space – or who responds with abusive or belligerent behaviour, may be subject to a $230 fine.