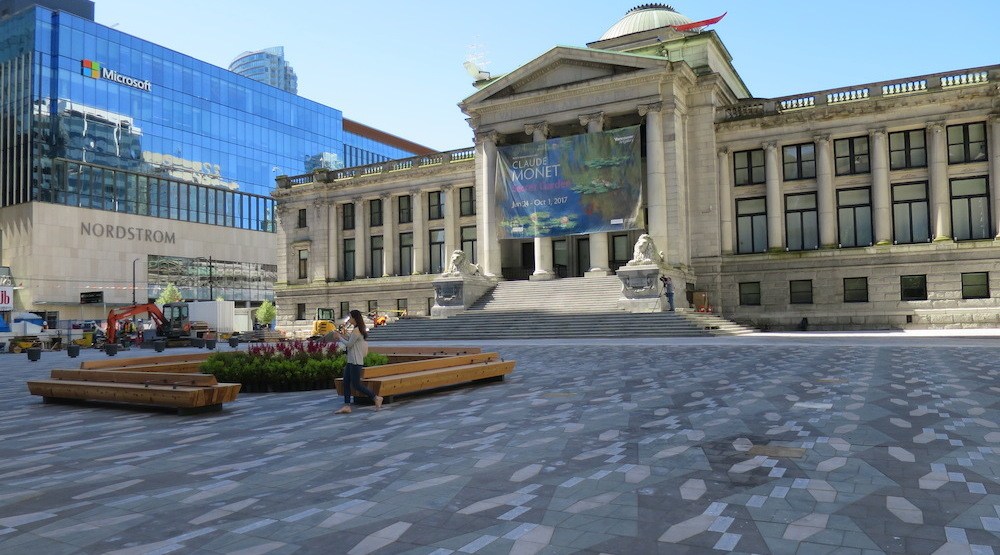 Two of downtown Vancouver’s largest public plazas have been renamed with new First Nations-only names by the City of Vancouver.

Unlike other First Nations supplementary renamings elsewhere in the city, these new names are meant to completely replace the existing English names that clearly associate the public spaces with adjacent landmarks.

In a ceremony earlier today, the municipal government and three local First Nations unveiled “šxʷƛ̓ənəq Xwtl’e7énk Square” as the new name of the popular Vancouver Art Gallery North Plaza, which was rebuilt last year as part of a $9.6-million makeover.

This new name for the plaza on West Georgia Street next to the Vancouver Art Gallery “refers to a place where a cultural gathering occurs such as a wedding, funeral, naming, honouring, or coming of age ceremony.”

The other plaza that was renamed today is Queen Elizabeth Theatre Plaza, located a few blocks east on West Georgia Street. Its new name is “šxʷƛ̓exən Xwtl’a7shn Plaza,” meaning “a place one is invited to,” is a reference to the city’s past use of the plaza for recent Walks for Reconciliation.

Signage for both plazas with the new names will be installed this fall.

However, will Vancouverites and tourists be able to pronounce and read the names and associate them to the plazas? Will these names even stick? That certainly remains unclear.

Earlier in the year, Vancouver City Council approved a new process to rename the new Northeast False Creek entertainment district with a First Nations name. It also wants to “encourage” TransLink to allow the creation of First Nations names for the six new subway stations of the Millennium Line’s Broadway Extension.

Renamings are part of the current Vision Vancouver-dominated City Council’s mandate of turning Vancouver into a “City of Reconciliation.”